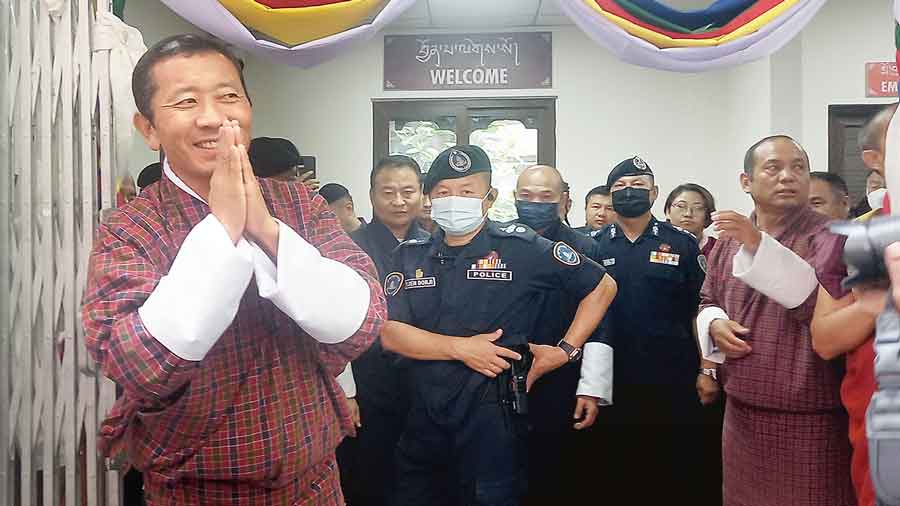 Celebrations and exchange of greetings marked the reopening of four land borders between India and Bhutan on Friday with Lotay Tshering, the Prime Minister of the Himalayan kingdom, turning up at Phuentsholing, across the frontier in Alipurduar district.

The border was reopened after a gap of two-and-a-half years for the resumption of people’s movement between the two countries.

Phuentsholing, the commercial capital of Bhutan, is also the most popular entry route to the country via land. It sits on the other side of Jaigaon, the bordering town of India in Alipurduar district.“We feel happy today as people from other sides of the border can enter our country again. Also, our own people can cross the border. Earlier, we couldn’t do it because of the Covid-19 pandemic. Till now, 90 per cent of our population has received four doses of vaccine and the situation across the border is quite comfortable,” Tshering told newspersons after the gates were opened.

Since March 2020, Bhutan had stopped people’s movement through the land routes. The country has four transit routes which open to India. Along with Phuentsholing, the transit routes through Samtse (that connects Chamurchi in Jalpaiguri district), Gelephu and Samdrupjonkhar (both on Assam border), were also reopened.

However, unlike Phuentsholing, through which any foreign national can enter Bhutan, only Indians can enter the kingdom through the remaining three routes.  Around 8.30am, Tshering, along with Buddhist monks and officials, reached Phuentsholing and reopened the border gate amid loud cheers of hundreds of Indians who had queued up to enter the kingdom.

He said unlike earlier times, his government couldn't allow the indiscriminate entry and exit of people through the border.“People of both India and Bhutan will have to carry their voter ID cards or passports for registration. They should also explain the reason for visiting Bhutan,” the Prime Minister said.

Soon, Indians started entering Bhutan through the gate that leads to the new pedestrian terminal. According to the new arrangement, everyone was checked with metal detectors. Bhutanese officials registered the entrants'  details and a QR code was issued to each of them.

“For visiting Phuentsholing, Indians do not need any permit but need only to register. However, if they move beyond a certain point of the town, they will have to get a permit. Also, one can spend hours at the bordering town but if he/she spends a night here, he/she will have to pay the sustainable development fee (SDF) of 1,200 Ngultrum,” said a source.

In Jaigaon, the local merchants’ association flew tri-coloured balloons and distributed fruit juice and sweets among people, who walked to India from Bhutan. From India, the first two tourists who crossed the border and entered Phuentsholing from Jaigaon were 74-year-old Mahinder Kumar Rakheja and his wife Guddi. They are from Delhi and are on a trip to Bhutan capital Thimphu. “We are visiting Bhutan for the first time. It gives us a great feeling that we are the first two tourists, who entered the country via this route as it reopened today,” said Mahinder.

Traffic through the gate, which is next to the entry point of the pedestrian terminal, resumed between Jaigaon and Phuentsholing.

Drivers of both sides were seen greeting each other.

“Unlike earlier days when Jaigaon used to buzz with enthusiasm as thousands of Bhutanese residents and tourists would reach here every day, life had virtually come to a standstill in the town during the past 30 months. We hope the situation will start reviving here from today and onwards. We thank the Bhutan government for reopening the gates,” said R S Gupta, the secretary of Jaigaon Merchants’ Association.