Bhowanipore: Dilip Ghosh says he was manhandled, TMC fires back 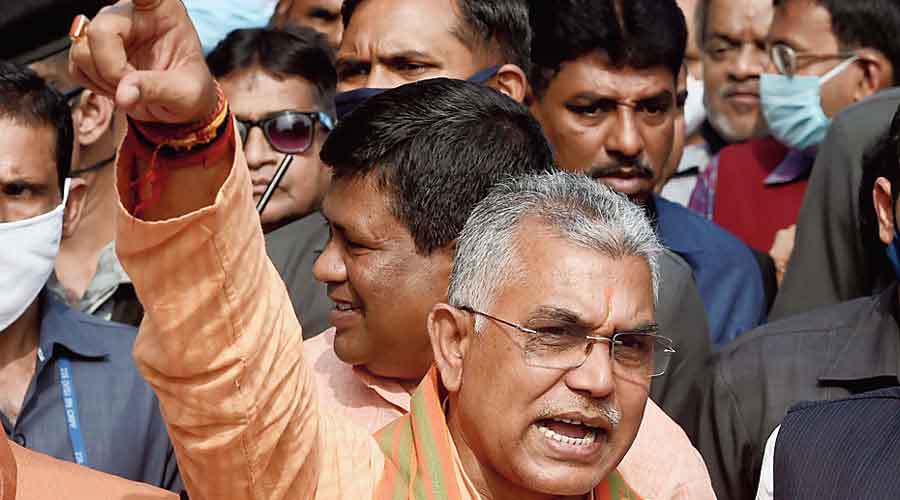 BJP national vice-president Dilip Ghosh was allegedly manhandled while party MP Arjun Singh faced 'go back' slogans by ruling TMC workers while campaigning for party candidate Priyanka Tibrewal, who is pitted against Chief Minister Mamata Banerjee in Bhowanipore Assembly constituency in the city on the last day of campaigning on Monday.

Ghosh was allegedly pushed by TMC workers when he went inside a vaccination camp at the Jodubabur Bazar area in the constituency, where by-poll will be held on September 30.

TMC in its turn alleged that Ghosh's bodyguard had brandished firearms to scare away the crowd.

TMC supporters present at the spot reportedly pushed Ghosh out and shouted slogans demanding that he leave alleging that he was campaigning at a state-run vaccination programme.

Ghosh was escorted out of the camp by his security personnel and left in his car.

An angry Ghosh later told reporters that the TMC had attacked him without provocation and heckled him and injured a BJP activist.

"We will take up the issue with the Election Commission. What kind of election this is?" he asked.

Singh, who is in charge of the BJP campaign in the area, faced 'go back' slogans. He was also called 'bohiragato' (outsider) as he went around the area soliciting votes.

Singh accused the state administration and police of doing nothing even when MPs and national level opposition leaders are being attacked.

High drama marked the incident as a strong police force barricaded the area and slogan-shouting TMC activists gathered nearby.

TMC leader Firhad Hakim, a close confidant of Banerjee accused BJP of provoking the people to create disturbances in the peaceful middle-class neighbourhood.

"BJP is resorting to provocation sensing defeat. It is better to ignore them. Common people are protesting against them for spreading hatred, falsehood and personal attacks," Hakim said.

In a tweet, TMC allleged that Ghosh's bodyguard had brandished firearms to scare away the people.

"@BJP4Bengal HITS A NEW LOW! How DARE a gun be aimed at (the) public in broad daylight? Do people not have the right to protest against leaders they do not support? Such blatant violation of human rights is shameful! This compromises the safety and security of people in Bhowanipore," the party tweeted.