Advertisement
Home / West-bengal / Bhowanipore: Didi must win big, but dwindling victory margins a cause of worry
Bhowanipore campaign ends on a bloody note

Bhowanipore: Didi must win big, but dwindling victory margins a cause of worry 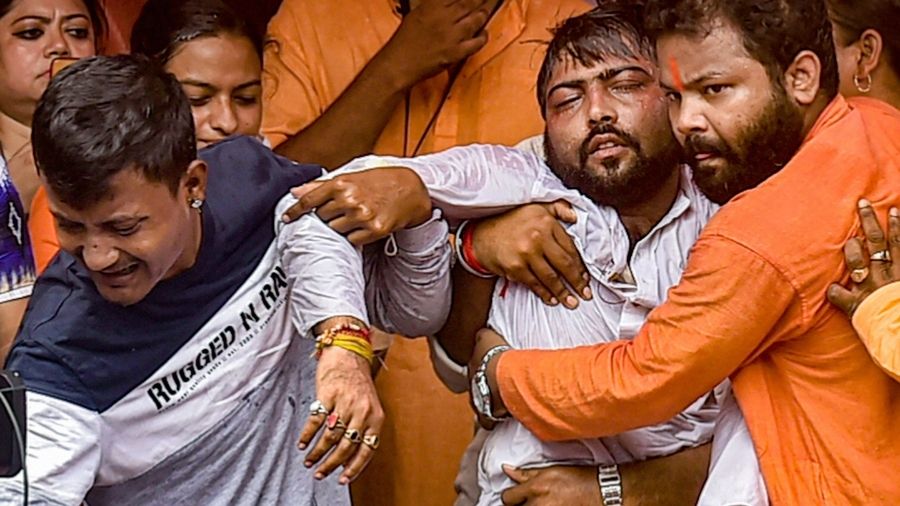 The last day of campaigning for the Bhowanipore Assembly by-poll ended with blood spilling on the streets near Jadubabu’s Bazar as supporters of Trinamul Congress and the BJP came to blows.

Monday’s violence around a rally by the former state BJP president Dilip Ghosh, in which a BJP supporter suffered a head injury, was the second consecutive day when the Opposition came under attack for campaigning in the chief minister’s home turf.

How DARE a gun be aimed at public in broad daylight? Do people not have the right to protest against leaders they do not support? Such blatant violation of human rights is shameful! This compromises the safety and security of people in Bhabanipur! pic.twitter.com/mdVyKvGuD7

1.1 How safe is the life of the common man in this state when public representative is being attacked in Bhabanipur, the home turf of Madam Chief Minister ? pic.twitter.com/bgU2DLqEiu

Sunday’s battleground was Harish Chatterjee Street where Mamata’s residence is located. There, CPM central committee member Sujan Chakraborty and others were stopped from entering the narrow street, which is also the neighbourhood of Trinamul Lok Sabha MP Kalyan Banerjee. The Calcutta Police had turned down the CPM’s plea to campaign in Mamata’s neigbourhood that turned into a mighty scuffle, as the police finally relented and allowed a handful of CPM supporters to seek votes on Harish Chatterjee street.

On Monday afternoon, it was the turn of the BJP to get into a free-for-all with Trinamul supporters when Ghosh was campaigning for party nominee Priyanka Tibrewal.

On paper, there is no reason for Mamata Banerjee to lose from Bhowanipore, her home turf. Yet, in this bypoll, which is already in the eye of the storm for being given "preferential treatment to accommodate the whims of a chief minister", Mamata has appeared jittery. One reason of course is her losing to Suvendu Adhikary from Nandigram in the March-April elections. Mamata knows if she can be beaten once, there is nothing to stop a repeat, if the voters so want. That is one of the reasons why she has made repeated appeals to the Bhowanipore voters to come out of their homes and cast their vote on September 30. She has made it amply clear that not a single vote can be allowed to be wasted.

Exactly a decade ago, when Mamata contested from Bhowanipore during a similar by-poll in her first term, the victory margin for the first-time chief minister was a handsome 54, 213 votes.

Five years later, Mamata took on a combined Left-Congress Opposition and increased her Assembly tally, crossing well over 200 MLAs. But her own victory margin in Bhowanipore had dipped by half as she defeated the Congress’ Deepa Das Munshi by 25,301 votes.

The Lok Sabha votes of 2013 was to be a shocker. The detailed result revealed in the Bhowanipore segment of the Calcutta South Lok Sabha seat that Trinamul’s lead was a mere 3,168 votes. The trend of reduced victory margins is discomforting for Mamata. This on the home turf of supposedly the most popular chief minister in the country and of course Bengal.

In 2021, Mamata moved to Nandigram and suffered the second poll snub of her career. Her trusted lieutenant Sobhandeb Chattopadhyay managed to salvage the situation at Bhwanipore and took the victory tally to 28,000 over the BJP nominee Rudranil Ghosh, who came into politics from films holding Mamata’s hands.

This victory margin might seem enough but is a cause of headache for Mamata and the Trinamul. Bulk of the lead votes for the Trinamul, approximately 21,000, came from minority-dominated ward 77, the areas around Alipore, Kidderpore and Ekbalpore. Any split in the minority votes in the constituency could bring the lead spiralling down.

Mamata became chief minister for the third time in Bengal after losing her seat. Therefore, it is not going to be enough for her to simply win. She has to win by a handsome margin. And Bhowanipore, at least on paper till Monday afternoon, did not display that confidence.

“Those who are saying she will win by over a lakh votes, or that the daughter has come to her home are actually scared. They are scared of the BJP, they are scared of the voters. That is why they are orchestrating such attacks. Our appeal to the Election Commission is that it must be as active as it was during the general election, or else, fair polls will be impossible,” said Suvendu Adhikary, leader of the Opposition and BJP’s Nandigram MLA.

State minister Firhad Hakim said, “There is no reason to give any importance to the BJP. They are seeking importance. Trinamul does not obstruct anyone. This is a part of their plan to communalise the polls, make personal attacks. In some places where people are fed up with these tactics, they may have protested.”