How come home minister is answerable for crime which is taking place in West Bengal under TMC's rule?: saffron party spokesperson 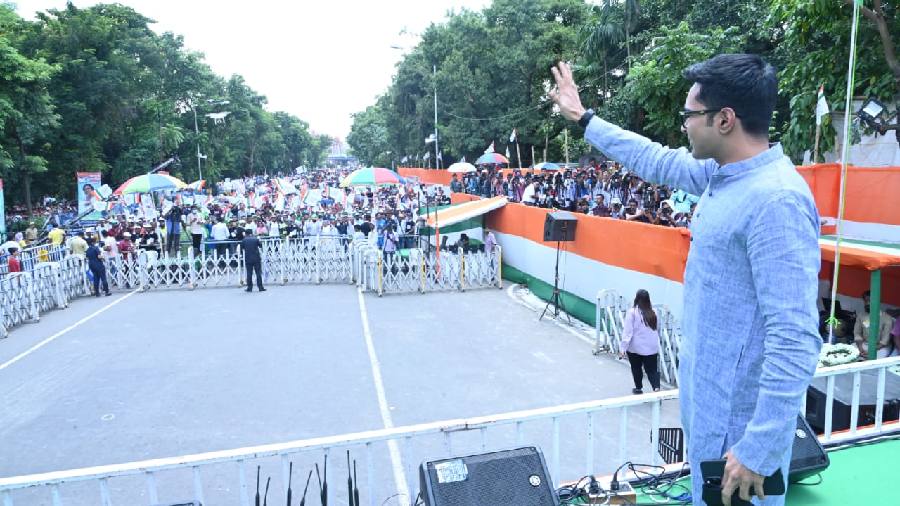 Addressing a rally in Calcutta, Banerjee took on BCCI secretary Jay Shah for "refusing" to wave the tricolour after India's victory over Pakistan on Sunday, saying that either he should apologise or his father Amit Shah should step down as the country's home minister.

"They talk about cattle smuggling scam. It is the BJP leaders who are the biggest beneficiary of this scam. The ill-gotten money was transferred to New Delhi to BJP leaders," he alleged.

"Why doesn't Amit Shah ask the BSF how the cattle are smuggled? Is the money going to Delhi directly? This is not a cattle scam, this is a scam of the home ministry. The BSF operates under the home ministry. How are cattle smuggled if the BSF is doing its job properly? The Union home minister is answerable to the nation," he claimed.

Banerjee, the national general secretary of TMC who is the nephew of Chief Minister Mamata Banerjee, also targetted Jay Shah after a video clip of him appearing to turn down an offer to wave the national flag after India beat Pakistan in a thrilling cricket match went viral.

"We saw yesterday how after India's victory against Pakistan, the home minister's son, Jay Shah, refused to hold our national flag. And these BJP leaders claim to be the architects of 'Har Ghar Tiranga'," the TMC MP from Diamond Harbour said.

"I want to tell the home minister, if you have respect for our national flag, ask your son to apologise, or resign from your post. The arrogance of Jay Shah needs to be checked. These are the BJP leaders who give us certificates on nationalism. We don't need their certificates," Banerjee said.

Referring to the alleged rape of a woman by two BSF personnel near the India-Bangladesh border in West Bengal, he said it was the reflection of "New India" of the BJP.

"This is BJP's 'New India'. BSF and CISF are under the central government. Was the BSF's jurisdiction increased because of this," he questioned.

Banerjee said that after this rally, a few more TMC leaders may be arrested.

"Partha Chatterjee was arrested two days after our July 21 rally. Today we have a mega rally, I think again someone from us might be arrested or summoned," he claimed.

The BJP said that Banerjee's allegations against its leaders are laughable.

"Even a kid would laugh at his statements. How come the home minister is answerable for a crime which is taking place in West Bengal under TMC's rule? These allegations are baseless and reflect the panic that has gripped the TMC," BJP spokesperson Samik Bhattacharya said.