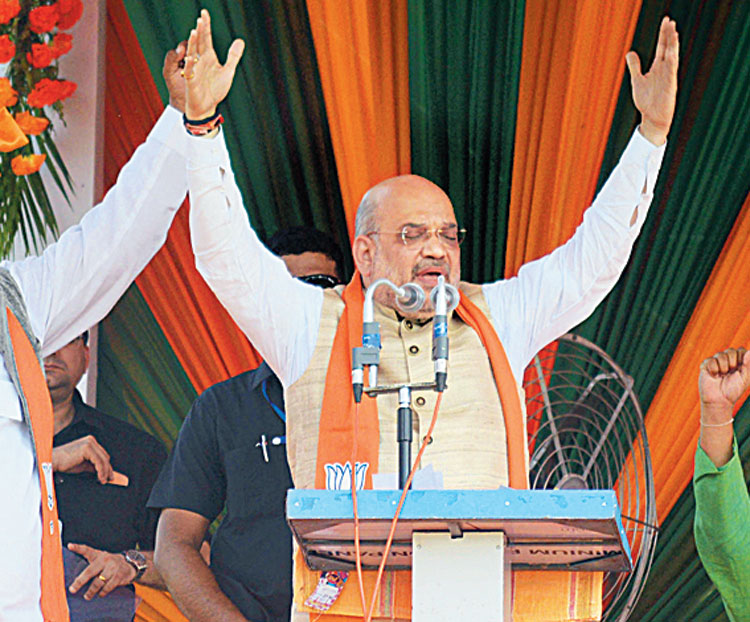 Kicking off his campaign in Bengal with a rally in Alipurduar, near the Assam border, Shah also reaffirmed his party’s commitment to the Citizenship Amendment Bill as he tried to distinguish between “refugees” and “infiltrators”.

“We will launch the NRC in Bengal to identify infiltrators. Simultaneously, we want to make it clear that people who have come here as refugees will be rehabilitated. It is for their interest that we have planned the Citizenship Amendment Bill. Here, some people are trying to mislead them by saying they would be asked to leave the country. No such thing will happen,” said Shah.

Trinamul dismissed Shah’s claims. “We will never allow the NRC in Bengal. The BJP wants to divide people. Bengal will never be a place for such exercises,” Trinamul secretary-general and minister Partha Chatterjee said.

Over past few months, the central BJP leaders didn’t speak much on the NRC as it created a controversy after nearly 40 lakh people in Assam failed to make it to the list.

The Citizenship Bill — to allow citizenship for non-Muslim migrants (Hindus, Sikhs, Buddhists, Christians, Jains and Parsis) from Bangladesh, Pakistan and Afghanistan — was also put in the freezer after widespread protests in the Northeast.

The twin issues returned to the poll debate on Friday. “Now it seems they want to use them to try and polarise voters in Bengal,” said a political scientist.

The BJP has often accused the Mamata Banerjee government of Muslim appeasement.

Although Shah slammed Mamata on Friday, the turnout of 25,000 at the Parade Ground in Alipurduar — which can accommodate around a lakh people — left district BJP leaders red-faced. They claimed confirmation from central leaders came as late as March 26, leaving them with little time to prepare.

“Also, police stopped around 500 vehicles carrying our supporters. They had to walk around 8km,” said Gangaprasad Sharma, the district BJP chief.

Prime Minister Narendra Modi is slated to hold a rally in Siliguri next week.

Shah touched upon some local issues, too, such as a September 2018 clash in North Dinajpur’s Daribhit over recruitment of teachers in a state school. Two former students died, with their families alleging police firing and demanding a CBI probe.

Debashree Chowdhury, the BJP candidate from the Raiganj seat under which the school falls, has started her campaign from Daribhit.

Speaking in Calcutta, Trinamul leader Chatterjee slammed Shah and said he had no knowledge of Bengal’s ground realities.

“I can say with a great deal of certainty that the BJP will not win anything in Bengal, nor return to power at the Centre. The people of the state and the rest of the country have made up their minds to throw Modi out.”