Apart from Calcutta, the situation is particularly bad in North 24-Parganas, Murshidabad, Jalpaiguri, Howrah and Hooghly 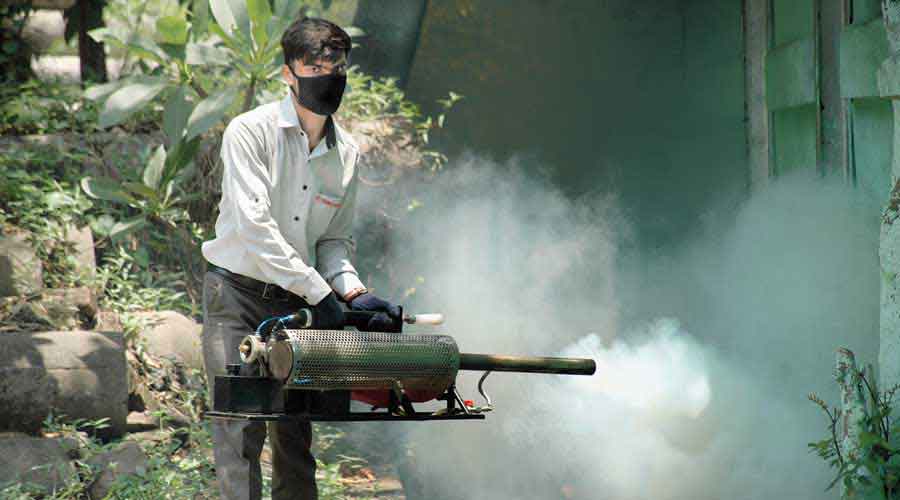 According to an analysis published by the public health department, Bengal had reported 42,666 dengue cases this year till Thursday.
File Photo
Snehamoy Chakraborty   |   Calcutta   |   Published 30.10.22, 01:09 AM

The Bengal government has asked officials in all the districts, including Calcutta, to step up measures to control dengue with the case count crossing 42,000, the highest cumulative figure till a year’s 43rd week since 2017.

Sources said that health secretary Narayan Swarup Nigam had at a meeting on Friday asked officials from the districts with spiralling dengue figures to intensify efforts to control mosquito breeding through cleanliness drives, spray larvicide, and encourage testing for early detection of cases.

Apart from Calcutta, the situation is particularly bad in North 24-Parganas, Murshidabad, Jalpaiguri, Howrah and Hooghly.

“Comparing the dengue numbers till the 43rd week of a year, this year’s cases in Bengal have been the highest since 2017. The number of dengue deaths too is alarming,” a senior health official said. Asked about the death count, he declined comment.

According to an analysis published by the public health department, Bengal had reported 42,666 dengue cases this year till Thursday, with the figure likely to be around 44,000 if data from the last two days is added.

The state reported 5,936 dengue cases last week, the highest for any single week since 2017.

Among the state’s 341 blocks, Lalgola in Murshidabad has reported the highest number of cases — 1,024 till Thursday — followed by Deganga in North 24-Parganas, Bally Jagachha in Howrah, Gorubathan in Kalimpong and Bhagwangola in Murshidabad.

Dengue is spread by the Aedes aegypti mosquito, which usually breeds in stagnant water that has been left undisturbed for at least seven days, a senior health official said.

“Although the state health department had sanctioned funds, the rise in cases suggests the measures to control the breeding of Aedes aegypti mosquitoes were not carried out properly,” he said.

Poor sanitation facilities — such as the lack of staff to clean drains — in rural areas has contributed to the dengue situation, a health official in Hooghly said.  Health officials suggested the prolonged monsoon this year had compounded the problem.

“The number is higher than past years as we have increased the tests in Bengal,” Nigam told The Telegraph.

Sources said the government was so deeply concerned that chief secretary H.K. Dwivedi had met district magistrates and health officials on Saturday evening.