10-15 leaders on their way out: Senior party member 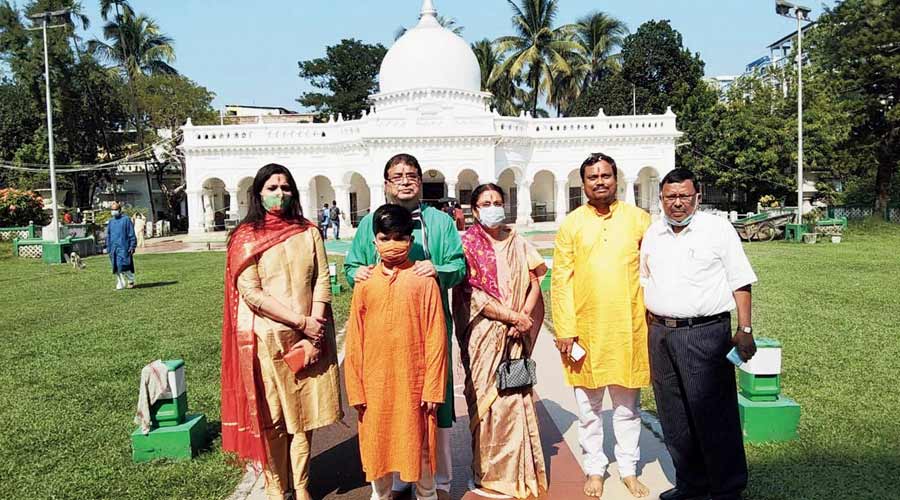 Udayan Guha (in green kurta), the Trinamul candidate who won the Dinhata seat by a record margin in the Assembly bypoll, with his family at Madanmohan Temple in Cooch Behar on Wednesday.
Picture by Main Uddin Chisti
Arkamoy Datta Majumdar   |   Calcutta   |   Published 04.11.21, 02:04 AM

Back-to-back losses against the Trinamul Congress in the bypolls held on September 30 and October 30 have triggered murmurs in the Bengal unit of the BJP that at least 10 to 15 leaders, including some MLAs and MPs, are about to defect to the ruling party in the coming weeks.

If the exodus takes place — a senior state BJP leader said that the Bengal unit was sure about such an exit — the saffron camp will find it difficult to tide itself over the crisis that got accentuated by the poor show in the seven bypolls held in a span of one month.

“Our leaders may put up a brave face saying a few defections won’t matter, but the truth is, the party’s entire Mission Bengal was based on leaders who joined us ahead of the polls. More defections will surely hurt the workers at the grassroots, which is the worst thing to happen to a cadre-based party like ours,” said a state BJP leader.

The trend of defection started with former Trinamul No. 2 Mukul Roy, who won the Krishnanagar North Assembly seat on a BJP ticket, and continued till earlier this week with the exit of former state minister Rajib Banerjee. A total of 6 BJP lawmakers — 5 MLAs and the former MP and Union minister Babul Supriyo — have already defected to the Trinamul.

“After the 7-0 drubbing in a span of one month, it appears that more people are set to quit our party. The discussion in the party is primarily revolving around who next and when,” a state BJP functionary said.

Several BJP insiders said the biggest problem with the party in Bengal was the unwillingness of the state and central leadership to engage in any sole-searching on why the target of 200-plus seats could not be achieved.

“Had there been some soul searching, we could have zeroed in on the mistakes, which would have helped us draw up plans for the future. Here, no one is talking about any plan as the central leaders are now busy with the UP elections,” said a state leader.

Over the last few months, the state leaders have spoken only about the post-poll violence allegedly unleashed by the Trinamul while most of the central leaders, who had been flown in to lead the poll campaigns, vanished from the scene leaving the party at the hands of Dilip Ghosh (national vice-president), Amitava Chakraborty (state general secretary organisation) and Suvendu Adhikari (Nandigram MLA and leader of Opposition).

The state leaders have hardly been on the same page on how to handle the situation after the post-poll debacle. While Ghosh had been busy criticising central leaders and the inductees from the Trinamul , Adhikari has spoken primarily about the alleged Trinamul terror.

“There is a unique situation in the party now. The turncoats are not happy and looking for opportunities to join the Trinamul while the old-timers are upset that these people had been brought in. It’s a strange situation where everyone is blaming everyone and there is no mutual trust among the leaders,” a BJP leader said.

Over the last few months, the Bengal unit of the BJP was engrossed in discussing how Ghosh was going after Roy or the war of words between Ghosh and Tathagata Roy (former state president), or the cold war between Sayantan Basu (state general secretary) and Adhikari

“It’s not only about camps, but also camps within camps. There is no attempt to make the new inductees comfortable in the party as the state leaders themselves are so insecure about their political future. There is no incentive to be in the BJP in Bengal,” said a leader, who recently went back to Trinamul.

According to him, the only “positive thing” that most of the Trinamul turncoats had received by joining BJP, was a security cover from central forces. However, recently the security covers of 30 such leaders have been withdrawn.

“What is there for these leaders to stay in the party? No power, no position, not even central security anymore. It is only natural that they’ll quit,” a source said.