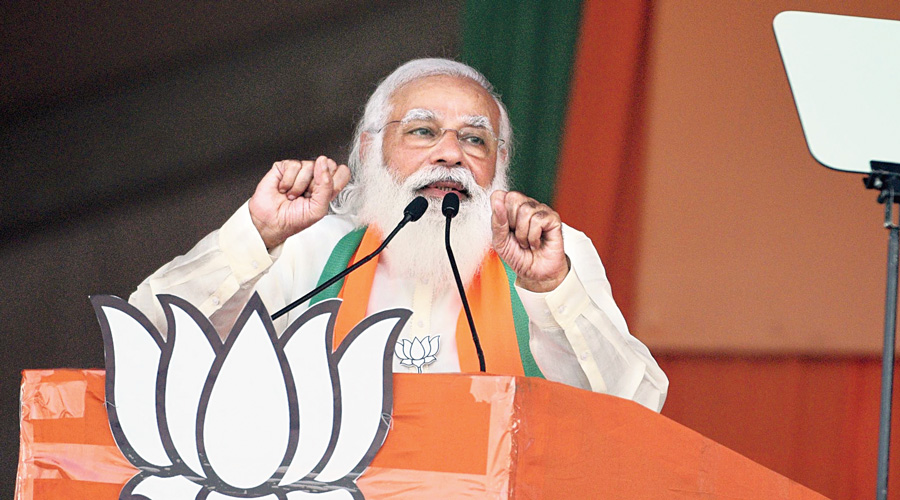 Making a strong Hindutva pitch at the hustings in Bengal, Prime Minister Narendra Modi Thursday attacked TMC leaders for calling those wearing saffron, sporting tilak and choti as "rakshas", and declared he does not believe in "seasonal faith".

He also said a BJP wave was blowing across Bengal where the party will win over 200 of the state's 294 assembly seats.

"Earlier, Mamata Didi had issues with chants of 'Jai Shri Ram', over immersion of Durga idols. Now TMC has problems with people wearing saffron, sporting tilak and choti (tuft of hair), they are calling them 'rakshas' (demons)," Modi told an election rally in Joynagar.

He was referring to the recent public declaration by Mamata Banerjee of her "gotra" (clan), an unusual thing for the Bengal leader to do, during the campaigning for the Nandigram seat.

The revelation had prompted Union Minister Giriraj Singh, who sports a choti, to ask," Do you consider Rohingyas and other infiltrators as 'Shandilya' (Mamata's gotra) and offer them the red carpet."

"Giriraj says Mamata's from the Rohingya clan. Proud of it. Far better than being from the chotiwala rakshasa clan," Moitra tweeted.

Singh often identifies himself as "Shandilya" on social media.

The prime minister also hit back at the TMC for calling his Bangladesh trip unethical and violative of the model code of conduct for elections and defended his visits to temples there.

The TMC had written to the Election Commission alleging that Modi's recent visit to Bangladesh violated the model code of conduct in place for the Bengal Assembly polls and some of his programmes there were "intended to influence the voting pattern" in certain constituencies.

"I visited one of the 51 Shaktipeeth Jeshoreshwari Kali temples in Bangladesh. TMC has taken umbrage. Is it wrong to pay obeisance to Shri Harichand Thakur (founder of the Matua sect) at Orakandi?

We always take pride in our faith and tradition," he asserted.

The Matuas, a Dalit community, wields considerable influence in several districts of Bengal and can tilt the scales in favour of any party in quite a few seats.

He also mounted a scathing assault on the TMC supremo for her accusations against "people of Bihar and Uttar Pradesh".

"You have taken oath of the Constitution which doesn't permit you to speak against other states or people of other states," he said, obviously referring to Mamata's claim that BJP has brought goons from UP and Bihar to influence the outcome of the election in Nandigram where she is pitted against her former confidante-turned-rival Suvendu Adhikari.

Taunting Mamata for her decision to relinquish her Bhawanipore seat and contest from Nandigram, Modi said she is now realising that she committed a mistake.

"The mood that prevails indicates Nandigram is doing at the very outset what Bengal wants to do," he said.

Nandigram is among the state's 30 Assembly seats where polling is underway on Thursday.

The prime minister said Mamata’s appeal to 14 leaders of other parties to unite against the BJP stemmed from her anxiety over impending defeat.

"She is seeking support from people who in her eyes are outsiders and tourists and whom she would not have the time to meet earlier," Modi said.

"For Didi, Bengal is a playground, but for BJP the state will be the ground for development, education and industries," he said.