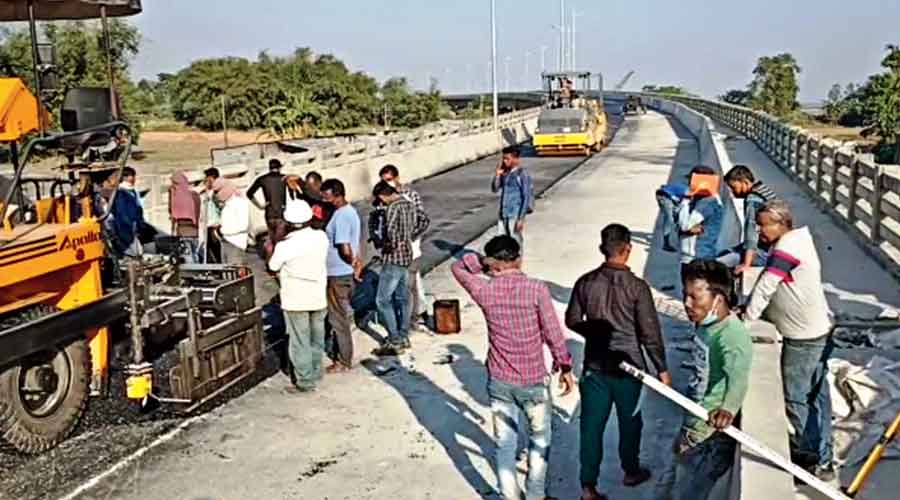 Work in progress on the new Joyee bridge over river Teesta, a project by the state government
Telegraph picture
Avijit Sinha   |   Siliguri   |   Published 15.12.20, 01:33 AM

Trinamul and BJP leaders in north Bengal seem to be running a race to tom-tom state and central infrastructure projects, respectively, on their campaigns ahead of the Assembly election scheduled next summer.

Both sides are gathering information on infrastructure projects particularly those related to road and railway connectivity in north Bengal to prove to the electorate that they have taken major initiatives for the region, which is traditionally perceived as “neglected”.

“In another three days, north Bengal will witness a historic development by way of rail connectivity, as on December 17, the Haldibari-Chilahati (in Bangladesh) railway route would be reopened. The central government has made it possible for the project to come true and after a gap of 55 years (the route had closed in 1965), train connectivity between Bangladesh and the region will resume,” said Sreerupa Mitra Choudhury, a prominent BJP leader of the area.

The BJP, party insiders said, will also highlight the second rail bridge that has come up over the Teesta river along the principal rail route that moves through north Bengal and connects the northeast with the rest of the country.

The bridge is likely to be commissioned in January next year.

The saffron party, which is banking on the north Bengal electorate and has iterated its target of winning 50 of the 44 Assembly seats from the region, will also talk about the second bridge coming up over the Ganga at Farakka, the second bridge over Teesta along NH27 near Jalpaiguri that has been recently commissioned and two bypasses which are under construction in Islampur and Dalkhola of South Dinajpur.

Trinamul leaders of the region are also not sitting back.

Bengal’s ruling party is eyeing the new Joyee bridge that the state government is building over Teesta to connect Haldibari with Mekhliganj in Cooch Behar.

“The bridge is likely to be opened next month. Our chief minister Mamata Banerjee has always focussed on infrastructure development and once this bridge is made operational, road connectivity between north Bengal and northeast will improve greatly. Also, export and import from north Bengal districts, the northeast and Bhutan to Bangladesh will get a boost, particularly after reopening of the new rail route to the neighbouring country,” said Chandan Bhowmik, a district Trinamul leader in Jalpaiguri.

Trinamul also intends to mention that it is the state government that has cleared the decks for expansion of Bagdogra airport by providing the required land to the Centre, said sources.

They would also point out that it is because of Mamata that the two Asian Highways (II and 48) have come up in north Bengal.

“The central government, on the other hand, has failed to finish the four-laning of NH27, the principal highway that connects northeast, in the region even though the project started almost two decades ago,” a Trinamul leader said.

Political analysts from the region said that the infrastructure card would be played by both Trinamul and BJP, along with a host of other issues, in the campaign. “It would be exciting to see whether by highlighting new projects whether BJP manages to retain its support it had garnered in the 2019 Lok Sabha polls or whether Trinamul manages to revive its base,” said an observer.