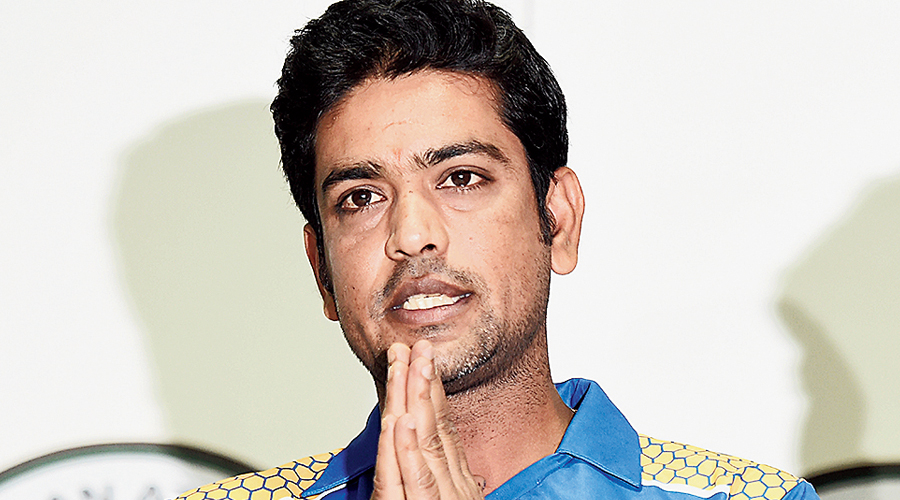 Laxmi Ratan Shukla on Tuesday stepped down as the Bengal minister of state for sports and the Trinamul Congress chief of Howrah (Sadar), fuelling speculation on his political future and bringing to the fore  again the problems within the bitterly divided ruling party in Howrah.

The development came amid the BJP’s whisper campaign on the possibility of several leaders deserting Trinamul when Union home minister Amit Shah would be in Calcutta later this month.

In a letter to chief minister Mamata Banerjee, the 39-year-old retired cricketer urged her to relieve him of his responsibilities, although he expressed his willingness to complete his term as the Howrah North MLA, as a gesture of respect to the 2016 mandate.

Shukla did not issue a statement, but Mamata lauded him, attributing the decision to his wish to devote more time to sports.

“He wrote to me and said he wanted to devote more time to sports and would like to step away from politics for the sake of sports…. There is nothing else to this. There is no misunderstanding… he is a good boy. I wish him all success for his future,” said the Trinamul chief in the afternoon.

However, others Trinamul leaders were not as kind towards the former Bengal captain in their interactions with the media.

Shukla, known in the Bengal cricket fraternity as “Bittu”, was a right-handed batsman and a right-arm medium pacer who represented not only Bengal in first class cricket but also Kolkata Knight Riders, Delhi Daredevils and Sunrisers Hyderabad in the IPL. He also represented India in three ODIs.

Sources close to Shukla said he had been “very displeased” for some time with both the internal dynamics of Trinamul’s politics in Howrah and the lack of actual importance of his portfolio.

“What the chief minister said is not true. Laxmi does not want to focus on sports. He retired from all forms of the game years ago. He doesn’t want to start anything new in that arena, as of now,” said a source.

“He had been a minister for over four-and-a-half years. Not one file ever reached his office, seeking his approval. He never got any opportunity to work there…. Also, his life had been made hell by Trinamul’s intensely vicious internal rivalry in Howrah,” he added.

The source said Shukla remained undecided on his immediate future.

Trinamul Bally MLA Baishali Dalmiya  issued a stern statement in support of Shukla, urging the leadership to wake up before “termites” destroy the party from within.

Agri-marketing minister Arup Roy, the chairman of the party’s Howrah unit that many are allegedly opposed to, was critical of Shukla. “This is akin to desertion by a general just before a war,” he said.

The BJP was publicly ebullient with the developments.

“It is evident that these people are being suffocated in Trinamul and are hence looking for an alternative. We have given them that. We will think about it if and when they want to join us,” BJP state chief Dilip Ghosh said on Shukla.