Among the denizens of Calcutta's Bowbazar, counting losses 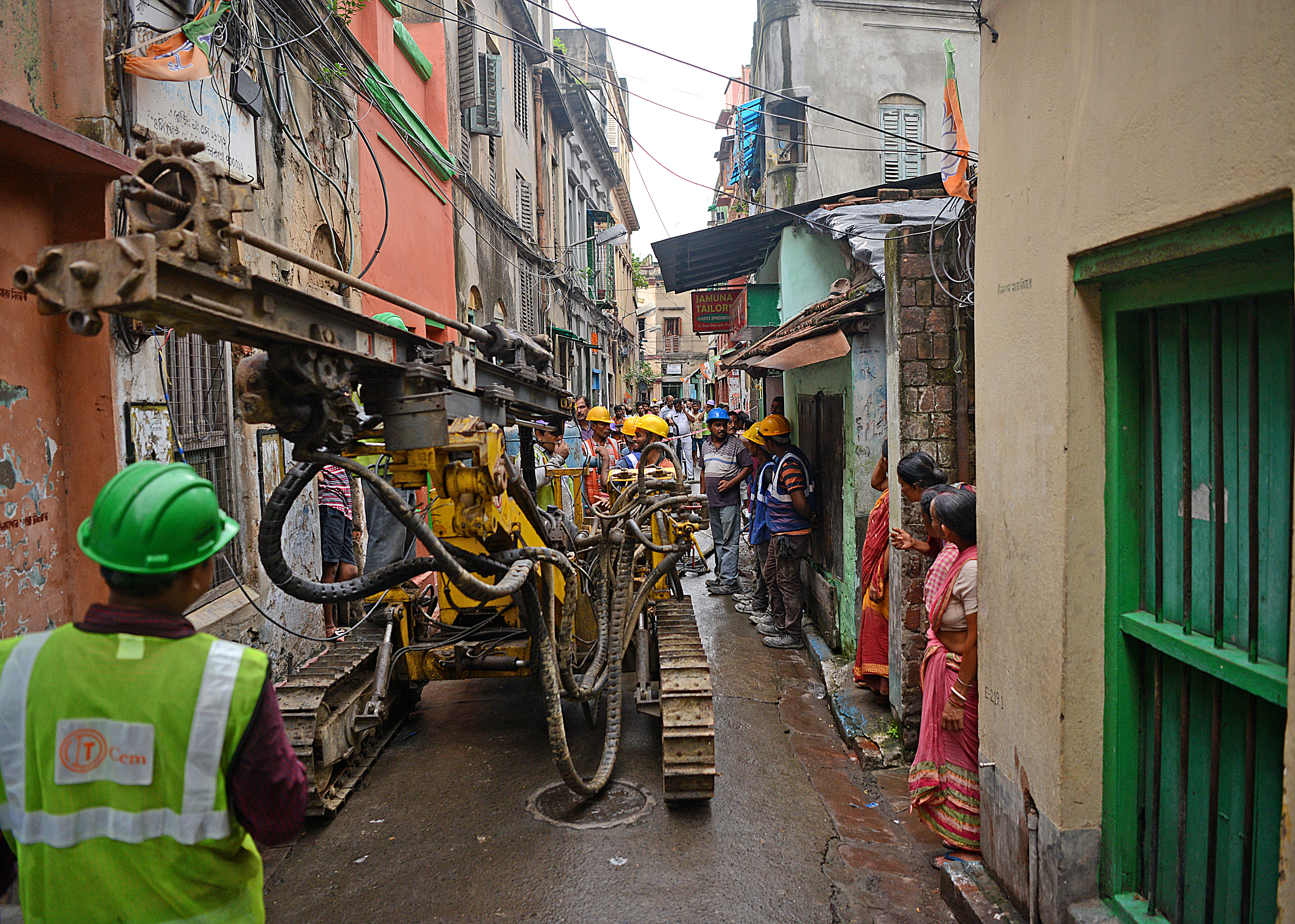 “It is so scary. One moment you have everything, the next moment you are a bhikiri… a beggar. Everything is gone. Everything,” says Tridip.
Swati Chakraborty
Moumita Chaudhuri   |   Published 28.09.19, 07:36 PM

I was in central Calcutta’s Bowbazar area five days after 52 houses in the neighbourhood came crashing down because of the troubled East-West Metro tunnel boring operation. “Just imagine,” says Tridipda, aghast; he lives not very far from Bowbazar. “It is so scary. One moment you have everything, the next moment you are a bhikiri… a beggar. Everything is gone. Everything.”

It is three in the afternoon when I reach the mouth of Gaur De Lane adjoining Sonapatty, the lair of goldsmiths. I was here one afternoon three years ago. It was very quiet that day. The entire row of workshops was closed. I remember because I was looking to ask someone on the street for directions and found none. But today it is abuzz.

It is an anxious buzz. Men in white knocking on doors; men in orange with helmets on slicing the lanes with purposeful strides; staff from the Metro Railway Corporation with identity tags around their necks. And, of course, the residents, soon to be ex-residents, of Bowbazar.

I plunge deeper into the lane and spot two teenaged girls squatting on the road. A little distance away three girls are leaning against the wall of a house — they seem listless, like flowers at day-end. A middle-aged woman in a red printed sari spots me and in a complaining tone starts to say, “It was two in the morning when the police knocked on our doors and told us we would have to vacate our house in the morning. Where will we go?” She turns to the wilting girls and barks an order, “Get inside the house at once. If the police comes by, they will not allow us to go in again.” And then to me, “They are asking us to leave our homes now, but I am afraid later they will ask us to prove we are the owners. My grandfather had built this house. I was born here. We do not have the money to buy another house.” So saying, she goes inside the house and shuts the wooden door on my face.

The lane is barely three feet wide. In places, no two people can walk side by side. It is dark and gloomy, not just because of the grey clouds, but because the sunlight has to force its way in through the cheek-by-jowl houses and jumbles of wires. Most houses share at least one wall. “This is why they crumbled thus,” says a man in his fifties. He is no resident of the area; he is here to help a relation. “When one house comes down, it pulls down another,” he explains.

I walk for about 100 metres, when the lane opens into a clearing where a Durga Puja pandal is being constructed. Some men are standing before the skeletal pandal, deep in discussion. Among them is a man whose house is right next to the pandal. He will have to vacate his house before the day ends. Shouldn’t he be packing instead of talking? He says resignedly, “There is nothing that I want to leave behind. For the moment I am just clutching on to some documents. Who knows when the NRC storm will hit Calcutta?”

Two siblings, pre-adolescent, are swinging from a bamboo frame. The girl, with her hair in a tight ponytail, tells me she has her exams in a few days’ time. She is leaving for her uncle’s place in Shyambazar today. “My parents said they will pack up and join us later,” she says. Her chubby face is neither cheery nor sad, but when she talks, a shadow flits over it. I ask her if she has eaten. She shakes her head. Her mother has not had time to cook.

The road turns to the left but the entry to the next lane has been cordoned off. I spot a house whose walls have collapsed. I hear shuffling feet and turn back to see some women being led into the forbidden alley by a Metro official. They are elderly, neatly dressed. Each clutching at a piece of paper — with a house number and an official seal — in one hand, and suitcases, plastic packets in another. Brows furrowed. They themselves like a swarm of bees whose hive has been rifled. One of them turns to another and says, “Make sure you get the medicines and prescriptions.”

I turn back into Gaur De Lane. It is impossible not to be affected when one is surrounded by such ruin — and I am not talking about the houses alone. By now, each and every door opening into the lane is ajar. I see one room with two beds, the mosquito net yet to be put away. Four elderly men are talking amongst themselves in near whispers and it seems to me as if they have been robbed of all agency. They are in their vests and lungis. When an official comes and asks them if they are ready to move out, they nod and follow him out as if he were the Pied Piper. As they walk away, without a backward glance, I notice no one has bothered to lock the main door even.

Struggle to find place for Devi in Bowbazar

Tales of hope & despair in Bowbazar