Amity lives on in death

In the village, children grew up with each other without knowing what religious differences were 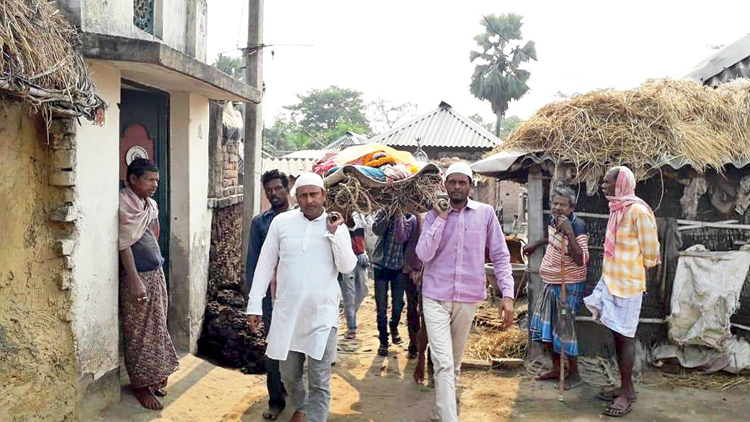 Two Muslim youths in East Burdwan’s Galsi organised and funded the last rites and carried on their shoulders the body of a Hindu woman to the local crematorium, having looked after the cancer patient for two years.

Saraswati Das, 60, who was suffering from breast cancer, died on Wednesday morning at her home in Galigram village of East Burdwan’s Galsi. Das’s husband Bhairabh earns Rs 40 a day from selling grass for cattle-feed. The couple’s only daughter is married to a day-wage labourer.

Neighbours and relatives said the family did not even have enough money to complete the last rites. This is when the two local youths — Sheikh Golam Murtoza and Azizur Rahaman Mallik — who had earlier helped with her treatment, came forward and assured that they would arrange everything for her cremation and all other rituals.

Galigram is around 22km from Burdwan and 12km from its nearest block town Budbud. Galigram has around 4,000 people, with around 600 Muslims.

Murtoza, 40, is an agent involved in the sale of old vehicles and motorbikes, while Mallik, 33, is a video-journalist with a Bengali news channel. They arranged for the money and carried the lady to the local crematorium, a kilometre away.

“It was impossible for us to organise the last rites. Murtoza and Mallik came as angels. They did what no relative could do for my aunt. Nobody else came forward to help,” said Arup Das, a nephew of the deceased.

Murtoza and Mallik arranged for food for everyone who went to the crematorium and bore the costs of the formalities and rituals there.

“The forces that now seek to divide our nation should come and witness this,” said Jhantu Ruidas, the son-in-law of the deceased.

Murtoza and Mallik, however, said religion was never a consideration for them, more so in helping out Saraswati, whom they called thakuma (paternal grandmother).

“Thakuma used to come to our area seeking help to run her family as her husband could not earn much. One day, she informed me that she was very ill and could not afford to go to a doctor. We took her to a doctor in Budbud. We found out she had cancer and we took her there many times later,” said Mallik.

“One of my relatives, Musharraf Hossain, runs a polyclinic in Budbud. He also helped a lot in her treatment,” he added. “As soon as we came to know that she died, we went to her home and found that there was no one to organise the last rites. We took care of it.”

Murtoza said that in their village and in the area, children grew up with each other without knowing what religious differences were.

“It is a basic, but needs to be underscored given the context of forces trying to polarise,” he said.

“This right here, this spirit is what Mamata Banerjee is fighting so hard to preserve,” said Maji.