More than 60,000 people had participated in an online selection process to decide on the name, Hamro Party 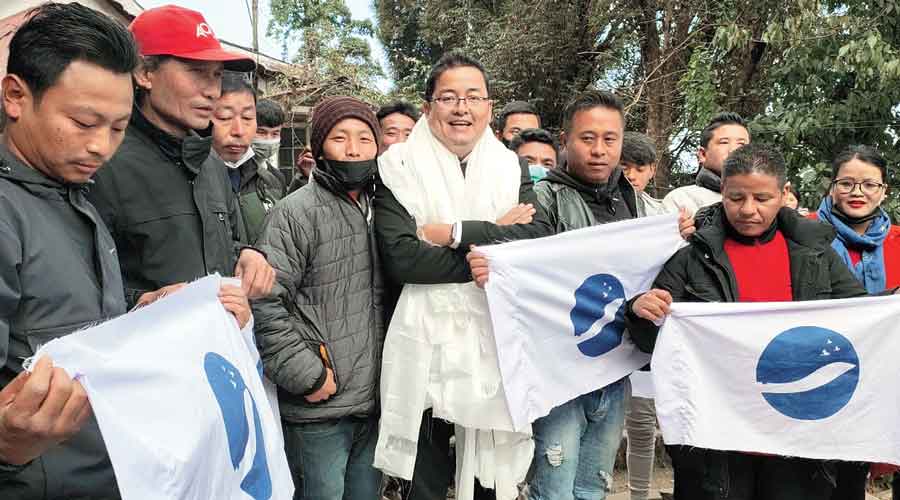 Hamro Party of Ajoy Edwards will launch its tea trade union on Sunday, a clear indication that the party has managed to attract many from the tea belt of the hills even before its official launch.

Ever since the party’s name and flag were revealed on November 25, many have joined Hamro Party (literally, our party), most from tea gardens, the most important constituency in hill politics.

On Saturday, more than 250 people joined the party.

“Hamro Hill Terai Dooars Chiabari Shramik Sangh, which will be our tea trade union, will be launched from Darjeeling on Sunday,” said Anup K.C., on behalf of the party.

Most hill people reside in the tea gardens and the party’s decision to start forming its frontal organisation through a tea trade union is significant. “It is an indication that the party has managed to attract the grassroots tea workers,” said a party leader.

Sources said the date of the party’s official launch is likely to be announced on Sunday.

More than 60,000 people had participated in an online selection process to decide on the name, Hamro Party.

In the last 20-odd days, Edwards and his team have visited various places, including Kalimpong, Mirik and Bijanbari to attend party joining events. Supporters in Kalimpong have also opened a party office.

Edwards, who was earlier with the GNLF but decided to quit the party after alleging that the GNLF president and his childhood friend Mann Ghisingh betrayed him, has managed to make a mark in the hills also because of his philanthropic activities.

Villagers of Jogmaya in Kurseong complained that a road was left incomplete since 2010 and requested Edwards to send one of the earthmovers to help finish the job.

“Many parties have been formed in the hills, but Hamro Party is definitely making a big impact even before its official launch. It seems to be attracting youths in large numbers,” said an observer.

Edwards’s party has announced that they would contest all elections in the hills, right from managing committee elections of schools.