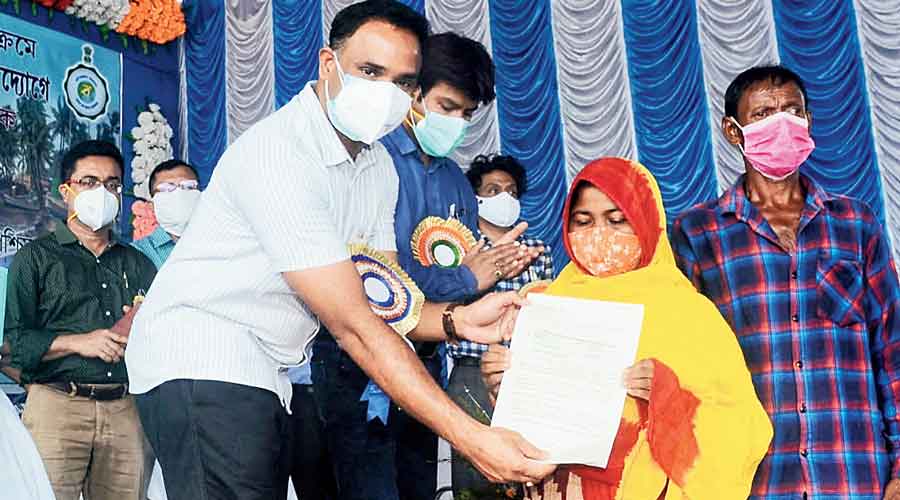 As a first step to rehabilitate 30 families from Ghoramara Island in South 24-Parganas, where increasing water levels of the Bay of Bengal have endangered their survival, the state government on Saturday handed over land rights to ensure their relocation in Sagar’s Dakshin Haradhanpur.

The pattas for 20 decimals of land for each of the 30 families as allotted by the state government’s land and land reforms department were handed over by South 24-Parganas district magistrate P. Ulaganathan and the Sunderbans affairs minister Bankim Chandra Hazra in the presence of other officials in Sagar. Officials are hopeful that these families will settle well in their new locations once the housing department builds huts for them by the start of 2022.

“It is a major step to save these families from a natural disaster that made their very existence vulnerable. The state government has allotted land to these families where we will build their homes and arrange livelihood options,” the DM said.

Ghoramara Island, some 30km north of the Bay of Bengal, has seen unprecedented erosion in the past few years. The island, which was of around 26 sqkm, has shrunk to around 6.7 sqkm .

Block development officer of Sagar, Sudipta Mondal said: “The entire Ghoramara Island is in a vulnerable situation. But these 30 families are the worst hit for the past two years because of two successive cyclones, Amphan and Yaas. We were in search of land for their rehabilitation. But a big stretch for a colony was not available until recently. Our aim is not just to relocate these families, but to give them livelihood support... by a coordinated initiative of land reforms, housing, fisheries, panchayat, animal husbandry departments.”

Sources in the South 24-Parganas district administration said that on the allotted land the housing department would build residential huts for them, fisheries department will dig ponds, panchayat departments will build toilets, and animal husbandry department will offer them free ducks and chicks for rearing to help their survival.

“At the same time the family members will be imparted with skill development training as per their aptitude under the guidance of departments concerned to help them in better living,” the BDO added.