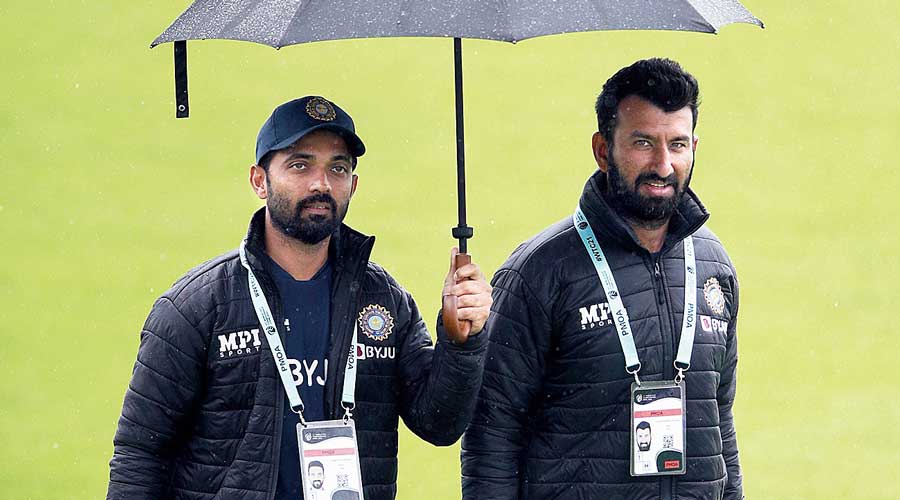 Virat Kohli had every reason to feel frustrated when umpires Richard Illingworth and Michael Gough decided on early stumps, almost 35 minutes before the scheduled close of play, on Sunday — Day III of the World Test Championship final at the Ageas Bowl.

Devon Conway had still been left ruing his poor shot selection after being dismissed by Ishant Sharma two balls earlier and Kane Williamson was only too happy to walk back as dark clouds and fading light saved them from batting under treacherous conditions.

Ishant was just starting to find his rhythm while Mohammed Shami and Jasprit Bumrah were waiting to add to New Zealand’s discomfort.

Now that the fourth day too has been washed out, a draw seems a more favoured result. Only 141.2 overs have been possible on the first four days after the opening day’s abandonment.

The International Cricket Council (ICC) will formally announce on Tuesday that the match will extend into the reserve day to make up for lost time.

The teams will get six sessions and a maximum of 196 overs to find an outright winner. Nothing can be assumed given that collapses are not a rarity in these challenging conditions. India lost their last seven wickets for 71 runs to end their first innings on 217 on Sunday.

But the ICC will have to face some criticism for its choice of venue. The Test had been moved from its original hosts, Lord’s, to Southampton because of its on-site hotel, which helped in the implementation of bio-security bubble restrictions.

Kevin Pietersen took to Twitter to express his despair. “It pains me to say it, but a ONE OFF & incredibly important cricket game should NOT be played in the UK,” the former England captain tweeted.

It pains me to say it, but a ONE OFF & incredibly important cricket game should NOT be played in the UK.

Left to Pietersen, he would have chosen Dubai as the venue for the final. “If it was up to me, Dubai would always host a one off match like this WTC game. Neutral venue, fabulous stadium, guaranteed weather, excellent training facilities and a travel hub! Oh, and ICC home is next to the stadium.”

The ICC’s contention has been that hosting the final in a bio-secure environment in Southampton meant that they were able to negotiate with the UK government to give the on-site hotel ‘Managed Quarantine Status’. It allowed the Indian team to train at the Nursery ground while in quarantine. Had it been at Lord’s, that would not have been feasible and the contingent would have had to go through 10 days of hard quarantine in a hotel.

The ICC records suggest this is the first time in 10 years that two days have been lost to rain in a Test match in England and the south coast is considered the driest place in the country.

However, the forecast though for the remaining couple of days is encouraging which should be music to the ears of the cricket lovers.