With Lionel Messi on board, PSG eye Champions League glory 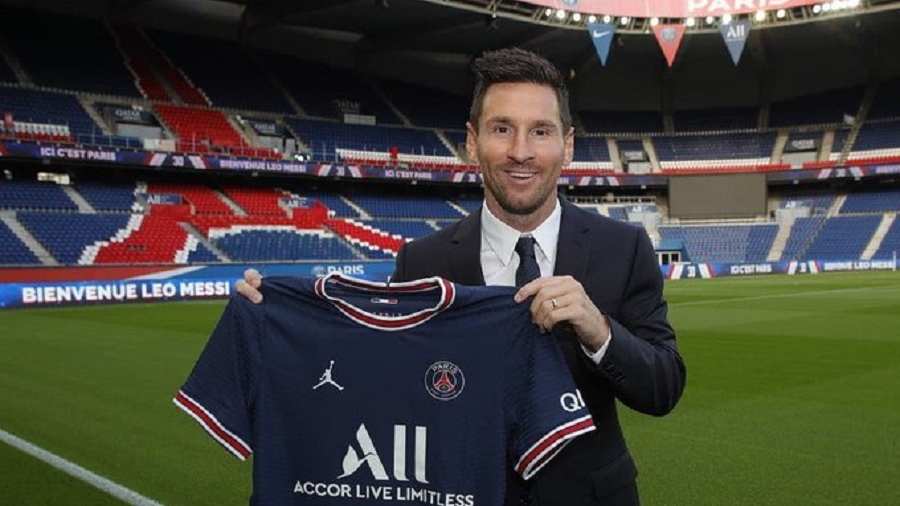 By securing the prized signing of Lionel Messi, Paris Saint-Germain moved into a new dimension with a player widely considered to be one of the all-time greats of the game. The 34-year-old Argentine forward, who joined on a two-year deal on Tuesday with an option for a third year, will be presented to a 50,000 crowd at Parc des Princes before the game against Strasbourg on Saturday.

"Everything about the club matches my football ambitions," Messi said. "I am determined to help build something special for the club and the fans."

“I am delighted that Lionel Messi has chosen to join Paris Saint-Germain and we are proud to welcome him and his family to Paris.” pic.twitter.com/Ty4wqTAZKW

Ten years after Javier Pastore was unveiled as PSG's first marquee signing for 42 million euros ( 49 million), Messi joined on a free transfer after bidding a tearful farewell to Barcelona on Sunday.

One transfer outlay was the hefty 60 million euros (71 million) it spent on Achraf Hakimi from Italian champions Inter Milan. He is arguably the best attacking right back in Europe and scored a fine goal on his league debut.

Qatari-backed PSG have been desperate to win the Champions League, falling just short when it lost the 2020 final to Bayern Munich. Now, with Messi on board, they have arguably the strongest attack in the game. Eager fans waited at Le Bourget airport on Tuesday afternoon and broke into chants of Messi! Messi! Messi! as he waved from a window wearing a T-shirt emblazoned with Ici C'est Paris" (This Is Paris) a favorite chant among fans.

No number 10 for Lionel Messi.
Kylian Mbappé included in the trio.

His arrival surpasses the fanfare of Neymar's world-record signing for 222 million euros (261 million) from Barcelona in 2017, and Zlatan Ibrahimovic's brazenly self-promoting presentation by the Eiffel Tower in 2012.

Their transfers boosted TV viewing figures considerably, with broadcaster Canal Plus getting a 40% increase for Neymar's first few games.

But neither Neymar nor Ibrahimovic won a Ballon d'Or. Messi has a record six of the top awards and PSG's revenue stream from marketing and merchandising will greatly benefit. His staggering tally of 672 goals for Barca includes an extraordinary 50-goal season in 2012; 96 league goals and a remarkable 133 overall across 2012 and 2013; eight Spanish league and six Champions League scoring titles.

'Back together', says Neymar as PSG confirms Messi signing

Messi has four Champions League trophies with Barcelona, a record 91 goals in a calendar year for club and country, and a 2021 Copa America title with Argentina. Atletico Madrid goalkeeper Jan Oblak was among the players praising Messi.

"For as long as I've been playing, Messi has been redefining football. If it wasn't for him, La Liga would be a very different place," Oblak posted on Twitter. He inspires everyone to raise their game." With his intuition, vision, touch and astute passing, Messi is about more than just scoring goals. Since 2006, no player in Europe's top five leagues has created more scoring opportunities for others. He's been credited with 190 assists, while five-time Ballon d'Or winner Cristiano Ronaldo is tied for sixth place with 123.

Although Messi has never won the World Cup, he belongs in a tiny group of players widely considered to be the greatest of all time: namely Brazilian Pele and the late Argentina great Diego Maradona. No player burst onto the biggest stage quite like Pele did as a 17-year-old in 1958, scoring twice in the final as Brazil won the World Cup. He won another two World Cups and scored 77 goals for his country one more than Messi has so far for Argentina.

Messi was inspirational at the Copa America, finishing as the joint leading scorer with four goals, leading with five assists and being voted the best player. Perhaps no player has carried a side in the incredible way Maradona did, scoring a remarkable solo goal against England in the quarterfinals on the way to winning the 1986 World Cup. Against the odds in 1990, he led his side to the final.

Messi shone for Barcelona in difficult circumstances in the past two seasons, continuing to score heavily. He netted 38 goals last season his 13th straight campaign with 30 or more and was at mesmeric in the 4-0 win against Athletic Bilbao in the Copa del Rey final. That was the last of his 35 trophies with Barca, the club he joined as a teen.

His next quest is to help PSG win the elusive Champions League title it craves. With Messi in the side, PSG have to deliver.