Unlike the Serb, both Dylan Alcott and Diede de Groot won gold medals in Tokyo. Having already won the three major titles this year, they are eyeing the Golden Slam 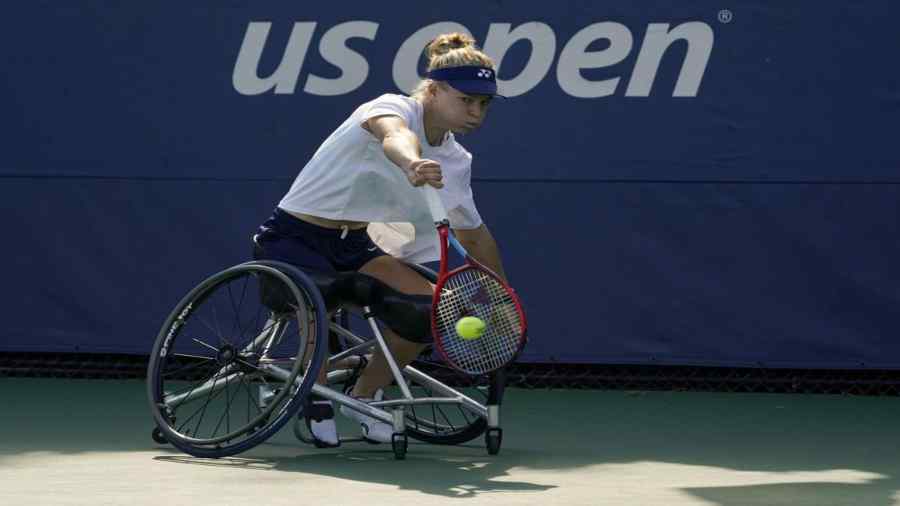 Dylan Alcott and Diede de Groot have a chance at tennis history Novak Djokovic can no longer make.

Unlike Djokovic, the wheelchair stars both won gold medals in Tokyo. Having already won the three major titles this year on the tennis tour, they arrived at the US Open in position for the Golden Slam.

Both insist they aren't thinking about it.

"I know that sounds strange, but I don't have expectations of myself to win everything anymore," Alcott said.

"If I win everything, amazing. If I don't, the sun will come up tomorrow. I think my girlfriend will still love me, my family won't disown me, so I'll be OK. So I want to do it, but I don't think about it that much."

.@DiedetheGreat and @DylanAlcott can make tennis history and join Stefanie Graf as the only players to earn the Golden Slam.

The Australian is the No. 1 seed in the eight-man wheelchair quad division. De Groot, from the Netherlands, is on top of the bracket for the women's singles tournament.

Both play their first matches Thursday.

Their biggest challenge might be fatigue. The Paralympics just ended over the weekend before the players had to make their way to New York.

"On Saturday was the gold-medal game. Then drank about 20 beers and then got on a flight at 6 am Sunday morning," Alcott said.

That's how he prepared for a Grand Slam tournament?

"You've got to celebrate," he said. "We won a bloody gold medal."

Steffi Graf in 1988 is the only player to win the Australian Open, French Open, Wimbledon, the US Open and a gold medal in the same year. A Golden Slam wasn't even a possibility for wheelchair players until recently, as Wimbledon didn't add wheelchair singles until 2016.

"I think it's more of a thing that the media and people around me are very busy with and me, I'm just trying to focus on my game," de Groot said.

Djokovic still has a chance at the first calendar-year Grand Slam in men's tennis since 1969, but his Golden Slam hopes were lost when Alexander Zverev beat him in the Olympic semifinals.

Alcott and de Groot say they wanted Djokovic to do it, but learned something when he didn't.

"I think following him, you could also sort of see his struggle, see how he's just a human and how he's not a robot," de Groot said.

"And I think his performance, it just showed how it's not just a given that you just keep on winning and I think I really took that with me going into my own Games."

Alcott has come to New York with a chance at a calendar-year Grand Slam, only to fall short. Seeing Djokovic fall in Tokyo was another reminder not to look too far ahead.

"I saw him lose and I thought to myself, maybe he was thinking about it and that pressure might have added to it," Alcott said.

Alcott is nearing the end of a stellar sporting career. Born with a tumor wrapped around his spinal cord surgery removed it but left him a quadriplegic the 30-year-old won a Paralympic gold medal in basketball in 2008 before switching to tennis.

Besides the radio and TV work he already does, he wants to pursue acting along with spending more time on his Dylan Alcott Foundation that helps young, disabled Australians.

"So I love tennis, but it's not the be all, end all in my life," Alcott said.

The 24-year-old de Groot, whose right leg is shorter than her left, already made wheelchair history in 2019 when she became the first women's player to hold all four Grand Slam singles titles at the same time.

Where the Paralympics had always been the priority, she said the Grand Slam tournaments are growing in stature for wheelchair players.

Now she might do something none of them have.

"For me at the moment, just playing any tournament, it's so much better than last year where all of it was canceled," she said. "So I think at the moment I just enjoy everything."