The greatest show on earth: The hot spots

As the 32nd edition of the Olympiad in the form of Tokyo 2020 wraps up today, The Telegraph recaps the unforgettable moments from the latest Olympic Games 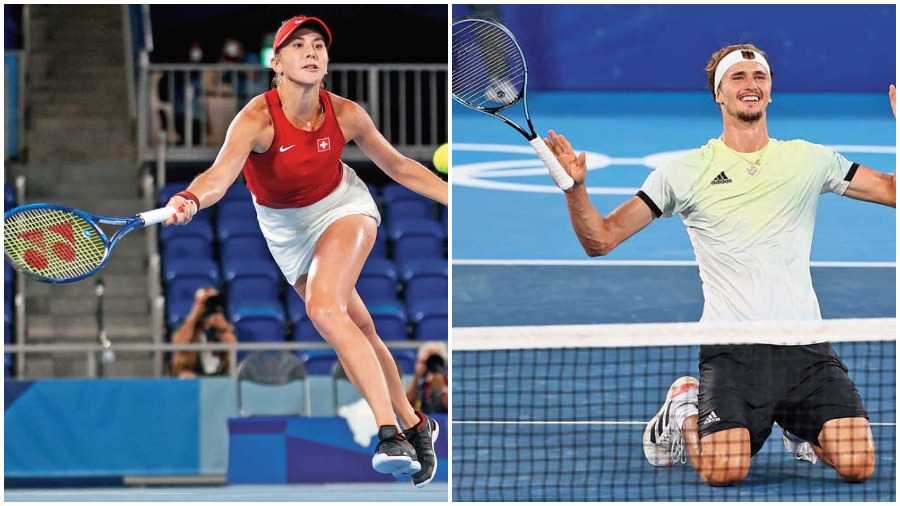 Novak Djokovic marched into the Japanese capital with the hopes of keeping his Golden Slam dream alive for 2021. However, the Serb was in for a shock as he missed out on the podium altogether and Germany’s Alexander Zverev seized his opportunity to strike gold. On the women’s side, Switzerland’s Belinda Bencic upset the apple cart to take home the gold medal, helped no doubt by some pre-final pep talk from fellow Swiss Roger Federer.

THE FIRST EVER GOLD MEDAL FOR THE PHILIPPINES

After 22 editions and 10 silver and bronze medals combined, the Philippines won their inaugural gold medal at the Olympic Games thanks to a once-in-a-lifetime effort by Hidilyn Diaz. The 30-year-old weightlifter, who grew up wanting to be a banker, set new Olympic weightlifting records by lifting 127kg in the Clean and Jerk and a staggering weight of 224kg in total. The mixture of relief and joy that animated Diaz’s face after she clinched gold spoke volumes of the pain that her country has had to undergo in its 97-year-wait for an Olympic gold medal.

DRESSEL TAKES OVER FROM PHELPS

How do you replace the most successful Olympian ever? The answer: You do not. Having said that, parallels with Michael Phelps were inevitable after American swimmer Caeleb Dressel enjoyed a sensational Games, taking home five gold medals, including one in swimming’s premier Olympic event, the 100m freestyle. Dressel, who had won a couple of events at Rio 2016, also anchored a comeback win for the United States in the 4x100m medley relay, and will return to America as only the fifth swimmer to have his name etched on five golds at a single Olympics.

Alongside surfing, karate, and sport climbing, skateboarding made its first appearance at an Olympics at Tokyo 2020. The results, as always in the topsy-turvy world of skating, proved to be anything but predictable. Nyjah Huston, a five-time champion and the planet’s most popular skateboarder, finished a disappointing seventh, as Japan’s Yuto Horigome emerged first to take the gold. In an even more astounding outcome, three teenagers came out on top in the women’s street skateboarding event, with a combined age of 42. Japan’s Momiji Nishiya, 13, and Fauna Nakayama, 16, won gold and bronze, respectively, while the silver medal went to 13-year-old Brazilian Rayssa Leal.

British diver Tom Daley won his first Olympic gold medal in Tokyo but may just be remembered more fondly for what he did afterwards. Speaking to the press, with adrenaline still pumping from his victory, Daley gave a heart-wrenching interview about the struggles he had to face throughout his life on account of being an LGBTIQ+ athlete. As Daley spoke with passion and grace, the symbolism of being flanked by Chinese and Russian athletes (same-sex marriage is illegal in both Russia and China) could not be starker. Encouraging fellow LGBTIQ+ athletes to never give up on their goals, Daley urged them that “no matter how alone you feel right now, you are not alone. You can achieve anything.”

BILES STEPS BACK, THE WORLD SITS UP

For decades, the psychological well-being of athletes has been one of the most neglected and least discussed aspects of professional sport. But a watershed moment may have emerged at Tokyo 2020 with Simone Biles, possibly the greatest gymnast of all time, backing out of multiple events at the Olympics citing mental health issues. Biles explained her withdrawal by saying that she experienced “twisties”, a case of athletes losing their spatial awareness in mid-air while executing a high-risk manoeuvre. While support for Biles’s decision poured in from all corners, the gymnast also faced a lot of social media flak for “letting her country down” and being a “quitter”. In spite of the unprecedented scrutiny on her, Biles secured another medal for her illustrious career, as she captured bronze in the beam final to draw level with Shannon Miller as the most decorated American female gymnast in history.

Usain Bolt had predicted that she would dominate the Tokyo Games and so she did, in some style. Jamaica’s Elaine Thompson-Herah earned the distinction of being the first woman at the Olympics to win back-to-back gold medals in the 100m and 200 m races, following on from her phenomenal showings in Rio. In defending her gold medal for the women’s 200m, Thompson-Herah ran one of the most outstanding races in recent memory, finishing with a barely believable time of 21.53 seconds to become the second fastest woman in the history of the event.

For the fifth time in succession an American woman was anointed as the best all-round performer at the artistic gymnasts’ showdown. This time the name of the woman was Sunisa Lee. Only 18, Lee had a narrow lead over Brazil’s Rebeca Andrade heading into the climax, but nailed her moves on the uneven bars as Andrade went out of bounds on two tumbling passes. In the end, Lee’s total of 57.433 was just 0.135 greater than that of Andrade, but good enough to give her a first Olympic gold medal and extend America’s dominance in an event they have come to make their own.

Few would have been stunned to see Naomi Osaka and Kento Momota with gold medals around their necks at the end of their respective competitions in Tokyo. However, the two Japanese fan-favourites could not live up to the billing and were eliminated prematurely in women’s tennis and men’s badminton, respectively. Appearing somewhat rattled, an exhausted Osaka bowed out in the third round after losing in straight sets to Czech Markéta Vondroušová. Momota succumbed to unseeded Heo Kwang-hee from South Korea 15-21, 19-21 to bid goodbye to his gold medal chances on home soil.

French judo star and double Olympic champion Teddy Riner seemed destined to sweep his way through the field and claim another gold in Tokyo. Until he did not. The man who had lost once in 11 years to a man who was not even at the Games (Japan’s Kokoro Kageura) went down to ROC’s Tamerlan Bashaev in the quarter-finals.