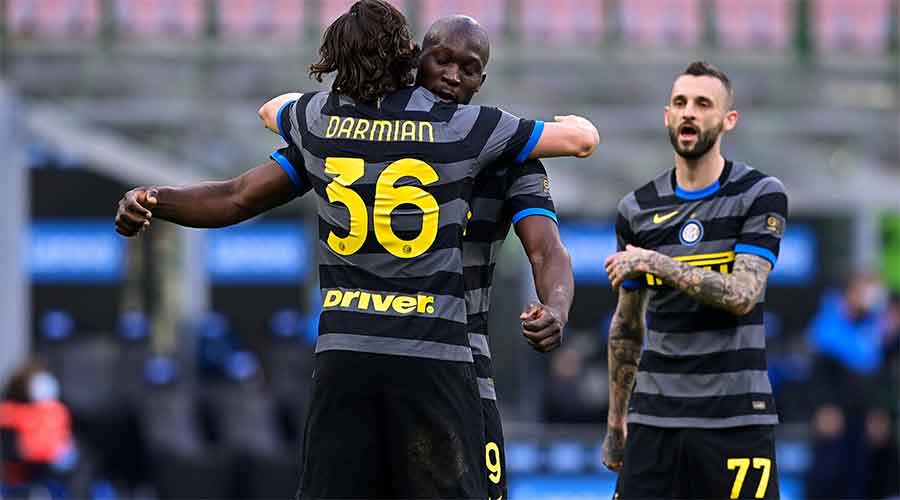 Romelu Lukaku, Alexis Sanchez & Matteo Darmian were all on the score sheet for Inter Milan in their well deserved 3-0 victory over Genoa to go 7 points clear on top of #SerieA standings.
Twitter/ @vumaSPORT
Reuters   |   Milan   |   Published 01.03.21, 04:04 AM

Romelu Lukaku scored after 32 seconds and bagged an assist as Serie A leaders Inter Milan defeated Genoa 3-0 on Sunday.

The Belgian striker drove through the heart of the visiting defence and fired in his 18th league goal of the season to register his club’s second fastest Serie A strike.

Lukaku teed up Matteo Darmian for Inter’s second after 69 minutes and was again involved for their third, when his shot was saved but headed in on the rebound by substitute Alexis Sanchez.

“We’re top of the table and that’s a good feeling for us,” Lukaku said.

“We mustn’t give up, last year we lost some of these games but this year we’re growing.

“These matches are a chance for us to send a message to the other teams, but the season is long.”

On Saturday, lacklustre Juventus were held to a 1-1 draw by Hellas Verona after Cristiano Ronaldo’s opener was cancelled out by a towering header from Antonin Barak.

League top scorer Ronaldo fired in his 19th goal this season early in the second half but Barak guided home a 78th-minute equaliser as the champions’ poor run of away form continued.

Andrea Pirlo’s side have picked up four points from their last four league games on the road.

“When you’re leading you need to bring them home,” Pirlo said. “We were definitely missing some experienced players.  I asked Cristiano and Alex Sandro to help the juniors understand, but unfortunately it wasn’t enough.