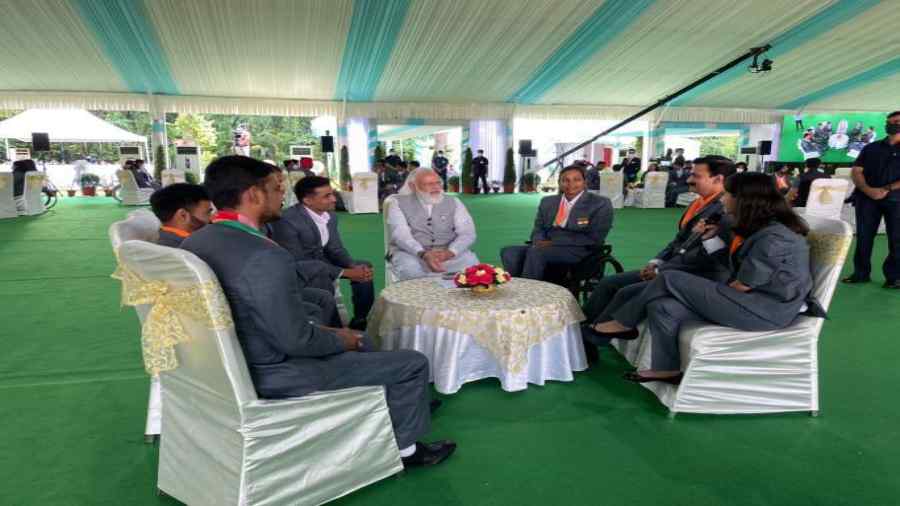 India's history-making Paralympians presented Prime Minister Narendra Modi with an autographed stole on Thursday during a breakfast hosted by him to felicitate the contingent at his residence here.

The Indian para-athletes returned from Tokyo on the back of a sensational campaign that saw them win an unparalleled 19 medals, including five gold, eight silver and six bronze.

This was the country's best-ever Paralympics campaign as it finished 24th in the overall tally.

The athletes presented the PM with a white stole signed by all the medal winners, which he was seen wearing around his neck. Several players also gifted him their signed sporting equipment, with which they won their medals.

The PM, who had a candid and informal interaction with the entire contingent that also included coaches, said that the sporting equipment would be auctioned.

The 70-year-old said the Paralympians' achievements will significantly boost the morale of the entire sporting community in the country, and budding sports persons will feel encouraged to come forward to take up sports.

Modi, who has been the first to congratulate the para-athletes on call after their medal winning feats, was seen talking to shuttlers Suhas Yathiraj, the District Magistrate of Noida, who won a silver, gold medallist Krishna Nagar (badminton) and young Palak Kohli (badminton).

Indian shuttlers bagged four medals including two gold, in para badminton, which made its debut in the Paralympics.

Glimpses from PM @narendramodi's interaction with Indian Paralympic champions who participated in the #Tokyo2020 #Paralympics as PM initiates 'medal pe charcha' with the young athletes#Cheer4India#Praise4para pic.twitter.com/Ec1oyGnQ7x

Modi praised the indomitable spirit and will power of the contingent and said that the performance is praiseworthy in light of the insurmountable odds that the para-athletes have overcome in their lives.

Boosting the morale of those who couldn't achieve a podium finish, the PM said that a true sportsperson does-not get bogged down by defeat or victory, and keeps on moving forward.

Shooters Avani Lekhara and Singhraj Adana, who both won two medals each in the Tokyo Games, also chatted with the PM.

Lekhara, who was paralysed waist down after being involved in an accident, had scripted history by becoming the first Indian woman to win a Paralympic gold before adding a bronze to her kitty.

The 39-year-old Adana, who is afflicted with polio, clinched a silver and a bronze.

The para-athletes thanked the PM for inviting them and said that sitting with him at the same table is a big achievement in itself.

The felicitation was also attended by Sports Mainster Anurag Thakur and his predecessor and current Law and Justice Minister Kiren Rijiju.