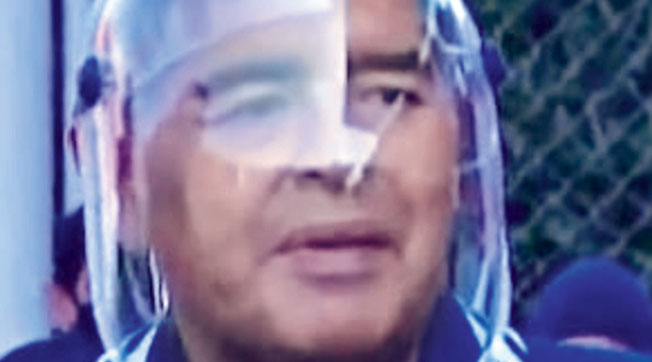 With his wild goal celebrations and larger than life antics, Diego Maradona is rarely inconspicuous when he attends matches in his native Argentina but this time it was his choice of PPE that was drawing attention.

Sitting in the stands for Gimnasia’s friendly at San Lorenzo, the 1986 World Cup winner wore a transparent, domed visor that covered most of his head as a precaution against catching or spreading coronavirus.

The look caused much mirth among fans, who commented upon Maradona’s likeness with Buzz Lightyear from the animated blockbuster Toy Story. However, Maradona did not see the funny side.

“Today I left my house with this mask, which my doctor recommended,” he wrote on Instagram with the caption accompanied with his seven-year-old son Diego Fernando.

“It is the same one being used by some doctors. I did it out of duty and respect for those who have died from Covid-19. And I was met with some mockery from adults, from boys and from some journalists.

“Those journalists who criticise you when you don’t take care of yourself. And when you take care of yourself, too. Those who laugh at people like me, but when they give the death toll, they are scandalised. It would be good for them to understand that they cannot sell themselves at all costs, without respect for anything or anyone. Agree on it, guys.”

Wednesday’s game was Gimnasia’s first since the Argentina Football Association (AFA) cancelled all competitions, including the Superliga, on April 27 due to the coronavirus pandemic.