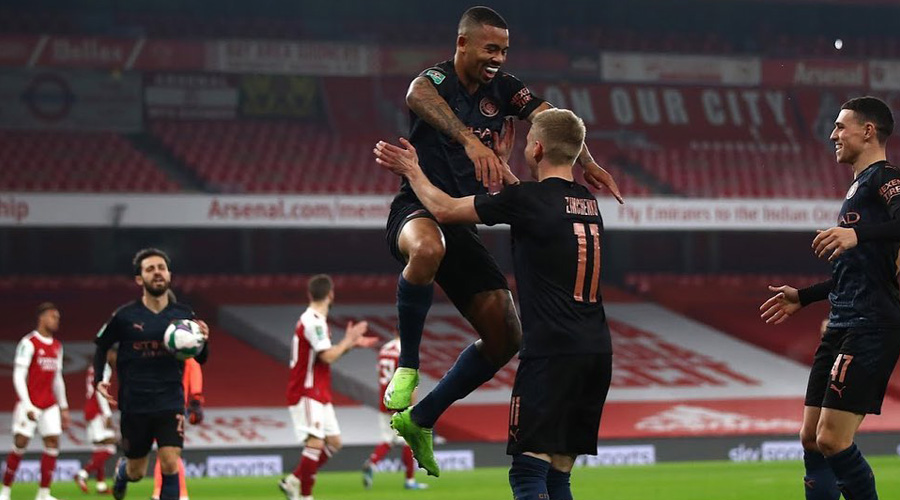 Arsenal’s League Cup exit at the hands of Manchester City on Tuesday has left the Premier League club in dire straits ahead of a season-defining festive schedule, manager Mikel Arteta said.

City, who have won the trophy for the last three seasons, went in front after three minutes through Brazilian striker Gabriel Jesus, who nodded home a fine Oleksandr Zinchenko cross.

Arsenal drew level in the 31st minute with a fine diving header from Alexandre Lacazette but City took charge after the break. A mistake by Arsenal’s Icelandic goalkeeper Runar Alex Runarsson gifted the visitors a 2-1 lead in the 54th as he let a relatively harmless Riyad Mahrez free-kick through his arms.

Phil Foden added a third, latching onto a ball into the box from Fernandinho and lifting it over the advancing Runarsson.

Aymeric Laporte then headed in a Foden cross to wrap up the win for Pep Guardiola’s side as they added to the troubles of the Gunners who are languishing in 15th spot in the Premier League, only four points above the relegation zone.

“We have to turn it around, there is no question,” Arteta said. Arteta was assistant at Manchester City before he joined Arsenal a year ago and Guardiola defended him from his critics.

“What can I say — in our position as a manager we’ll be judged by the results. I can only say I was with him a long period, the most successful period our club had.

“He’s an outstanding manager, incredible work ethic and puts the club in front of any decisions he has to make,” Guardiola said of his fellow Spaniard. City joined Brentford in the semi-finals after the Championship side enjoyed a 1-0 win over Newcastle United earlier on Tuesday.