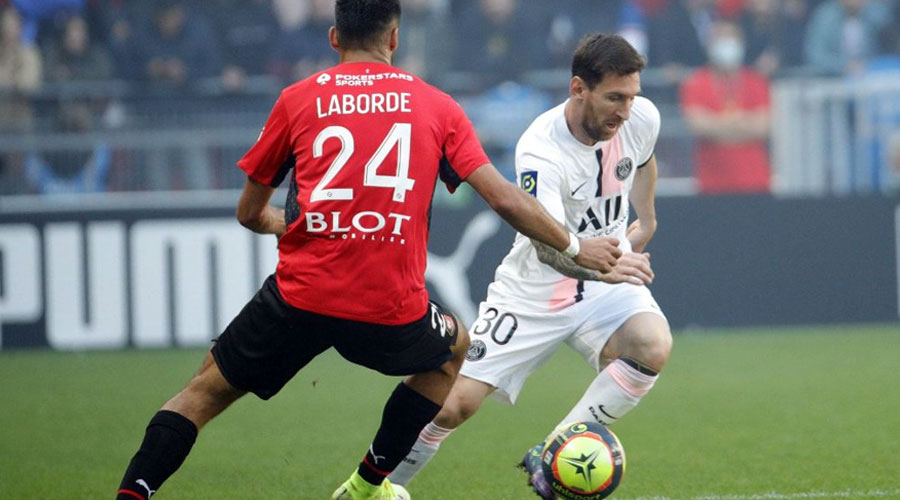 Rennes won thanks to goals by Gaetan Laborde and Flavian Tait either side of the interval to end PSG’s eight-game winning run in the league and inflict their first away defeat in the competition for eight months.

PSG, beaten in the pre-season Trophy of Champions by Lille, stayed top of the standings with 24 points from nine games, six ahead of second-placed RC Lens who beat Stade de Reims 2-0 on Friday.

“We played 25-30 minutes of very good quality,” said PSG coach Mauricio Pochettino. “We were in control of the game.

“We conceded the goal in a strong moment for them. When we started the second half we were down 2-0 right away, it was a different game after that. I’m a little bit angry. Without underestimating what Rennes did, we are frustrated and disappointed that we did not convert our chances and to concede these goals. These situations leave us bitter and disappointed.”

Five days after an impressive win over Manchester City in the Champions League, PSG got off to a lively start but lacked sharpness as Neymar skied a close-range attempt over the bar in the 22nd minute.

Lionel Messi’s 25-metre free-kick crashed against the crossbar and, although he combined well with Neymar and Kylian Mbappe, the visitors struggled to break the deadlock.

Rennes, who had less than 72 hours to recuperate after beating Vitesse Arnhem in the Conference League on Thursday, went ahead on the stroke of half-time in clinical fashion.

Laborde netted his sixth goal of the season by volleying home from Kamaldeen Sulemana’s cross.

Having failed to manage a shot on target in the first half, PSG were caught cold straight after the interval as Tait fired home from Laborde’s cross.

The hugely-disappointing Neymar was substituted by Mauro Icardi in the 76th minute but the Argentine failed to inspire PSG who also failed to muster a shot on target in the second half.

Rennes are 11th on 12 points, two behind champions Lille who beat fifth-placed Olympique de Marseille 2-0 courtesy of a Jonathan David double as they handed the visitors their second league defeat in a row.

Olympique Lyonnais are 10th on 13 points after a stoppage-time penalty by St Etienne’s Wahbi Khazri salvaged a 1-1 home draw for their arch rivals.

Lyon, who had Houssem Aouar to thank for the first-half goal, finished the game with 10 men after goalkeeper Anthony Lopes was sent off 15 minutes from time for handling the ball outside his area.

Substitute goalkeeper Julian Pollersbeck could do nothing to deny Khazri when the forward took the spot kick five minutes into added time after a Jason Denayer handball.

The game was interrupted for a few minutes in the closing stages when fans threw flares onto the pitch.

St Etienne stay bottom of the standings on four points and without a win in their first nine games.