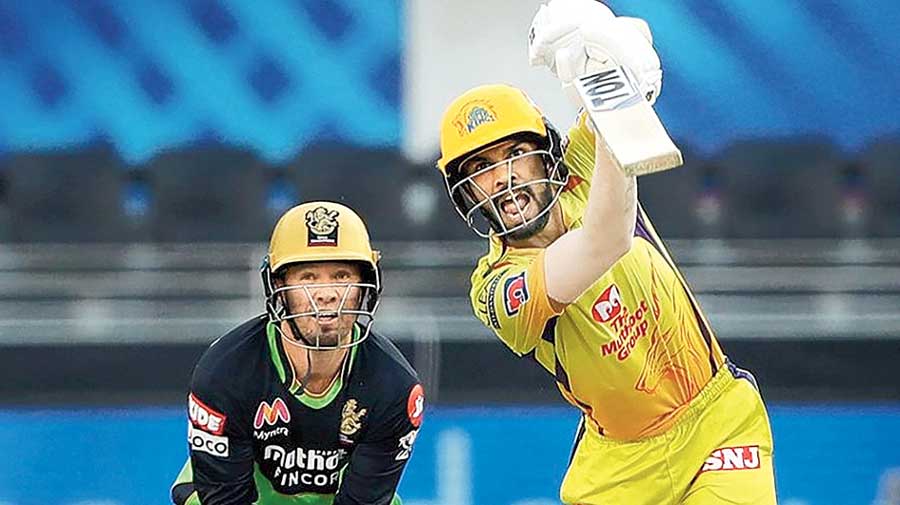 For the first time in this IPL, Chennai Super Kings played the kind of cricket that has won them the crown thrice.

Their bowlers stuck to the task on a slow wicket and then their batsmen showed intent and ensured they remained sensible during the run chase, as the Super Kings thrashed Royal Challengers Bangalore by eight wickets at the Dubai International Stadium on Sunday.

For RCB, the defeat comes as a blow as it significantly diminishes their chances of a top-two finish.

Sam Curran (3/19), Deepak Chahar (2/31) and Mitchell Santner (1/23) combined well to restrict RCB to 145/6 after Virat Kohli opted to bat first. Thereafter young Ruturaj Gaikwad (65 not out off 51 balls) showcased his talent and potential with some quality strokes that helped the Super Kings reach home comfortably with eight balls to spare.

The spark may have come a bit too late for the Super Kings, who are all but out of the competition. With 12 being their maximum achievable points from this stage, a victory for Kolkata Knight Riders versus Kings XI Punjab on Monday will officially end the campaign for the Mahendra Singh Dhoni brigade.

Nonetheless, on Sunday, the Super Kings made perfect use of the conditions right from the onset. Curran — one of CSK’s rare consistent performers in the competition — and all the other bowlers choked RCB’s run flow. They did not allow openers Devdutt Padikkal and Aaron Finch to do much damage and managed to restrict even Kohli (50) and AB de Villiers.

One of the most sought-after and feared pairs in T20 cricket, Kohli and De Villiers stitched 82 for the third wicket, but their partnership couldn’t quite gather steam. And that’s mainly due to an excellent bit of tight, disciplined bowling during the middle overs that put extra pressure on Kohli, De Villiers and the rest.

Kohli could manage just a four and a six while De Villiers hit four boundaries. Kohli’s strike rate was 116.27, while that of De Villiers was 108.33 which signifies how well the likes of Santner, Ravindra Jadeja and Imran Tahir too could contain the RCB batsmen.

In reply, Gaikwad, who is one of the most talked-about young players in this league, finally had a good day in office, hitting four fours and three sixes. He looked assured while choosing the loose deliveries, sweeping Yuzvendra Chahal for a boundary and coming down the track to loft Moeen Ali for a six.

Fittingly, a hook by Gaikwad that went for a six brought a much-awaited win for the Super Kings.