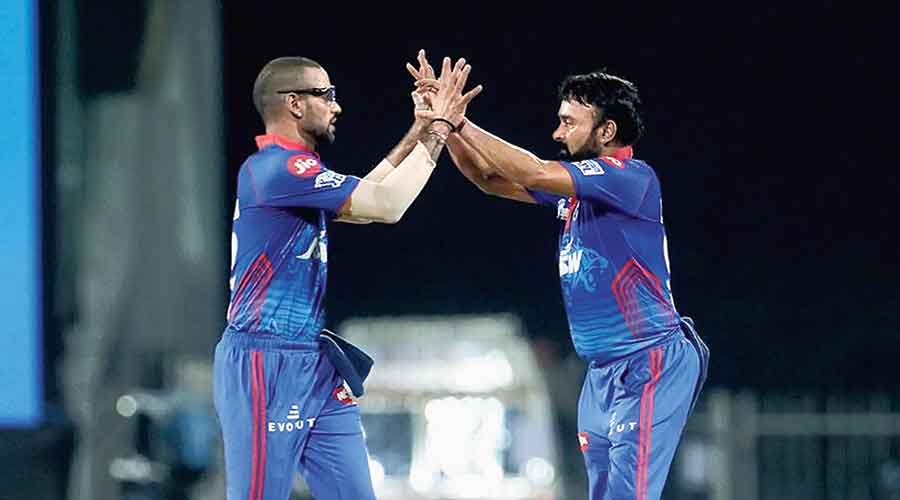 Delhi Capitals’ six-wicket win over Mumbai Indians on Tuesday was a lesson for all those who think that T20 cricket is just see-the-ball-hit-the-ball stuff. It’s cricket after all and like all other formats of the game, the shortest one too needs wise application of discretion. No point using the hammer when all you need is a chisel.

Chasing a 138-run target is considered an easier challenge in T20s. But in their last three games, Mumbai had twice defended 150-odd totals and so the Capitals knew that the chase would not be a cakewalk. It turned out exactly like that with the win coming with only five balls to spare.

But the Delhi team should be applauded for planning the chase meticulously and never going overboard with their shots despite the temptations of the glamorous format. And that is why Shikhar Dhawan’s 42-ball 45 would have to be considered a masterpiece.

So what if his strike rate was only 107.14, he, or his team, did not need anything more fashionable. The left-handed opener, who is in prime form this IPL and who is also the current Orange Cap holder for being the tournament’s leading scorer, guided his team calmly towards the target.

Capitals’ No.3 batsman Steve Smith (33 off 29 balls) too did not attempt anything fancy and his 53-run partnership with Shikhar formed the spine of his team’s chase.

When Shikhar was finally dismissed, the Capitals need 38-more runs from 31 balls with seven wickets at their disposal. Patient batting from Lalit Yadav (22 not out off 25 balls) and the opportunistic Shimron Hetmyer (14 not out off 9 balls) helped Capitals register their third win in four matches.

Mumbai perhaps erred in not retaining Trent Boult for the death overs. The left-armer pacer from New Zealand is a proven death-overs specialist and was instrumental in his team’s win in the last match as well.

Boult bowled well on Tuesday too, boasting a kingly economy of 5.75, but his last over was the 18th of the innings. With Bumrah bowling the 19th over, stand-in captain Kieron Pollard had to bring himself on to defend 5 runs in the last over. He was hit for a four off the first ball and he bowled a no-ball next to give Capitals the winning run.

One wonders if regular captain Rohit Sharma, who claimed he was out of the field because of a “niggle”, would have done the same thing, especially when it was more or less clear after the 15th over that the match would go till the last over.

Even though the focus is perennially on the Powerplay and death overs, it’s the middle overs which play a bigger role in deciding outcomes of T20 matches. Batsmen need to ensure that the scoring rate doesn’t drop too much during that phase while bowling sides look to slip in a few quick and tight overs to change the balance of the match.

That is where the Capitals outsmarted Mumbai on

Tuesday. After a moderately brisk start where they scored 55/1 in the Powerplay overs, Mumbai lost the plot when two set batsmen were dismissed in quick time.

First, Suryakumar Yadav (24 off 15 balls) nicked an Avesh Khan delivery to the ’keeper while trying to glide it to third man in the seventh over. Then, in the ninth over, Rohit (44 off 30 balls) perished at long-on while trying to accelerate.

Mumbai managed to score a mere 23 runs between the sixth and tenth overs. In fact, after Rohit had hit Amit Mishra for a four in the second ball of the ninth over, Mumbai failed to eke out a single boundary in the next 29 balls.

With more wickets tumbling, Mumbai’s innings failed to gather momentum of any sort and they scored only 23 and 36 runs between the 11th-15th and 16th-20th overs.

Capitals’ bowlers, especially Mishra (4/24) and Lalit (1/17), deserve all the credit for tying up Mumbai in the middle. They took the pace off the ball on a sluggish pitch making it more difficult for Mumbai.