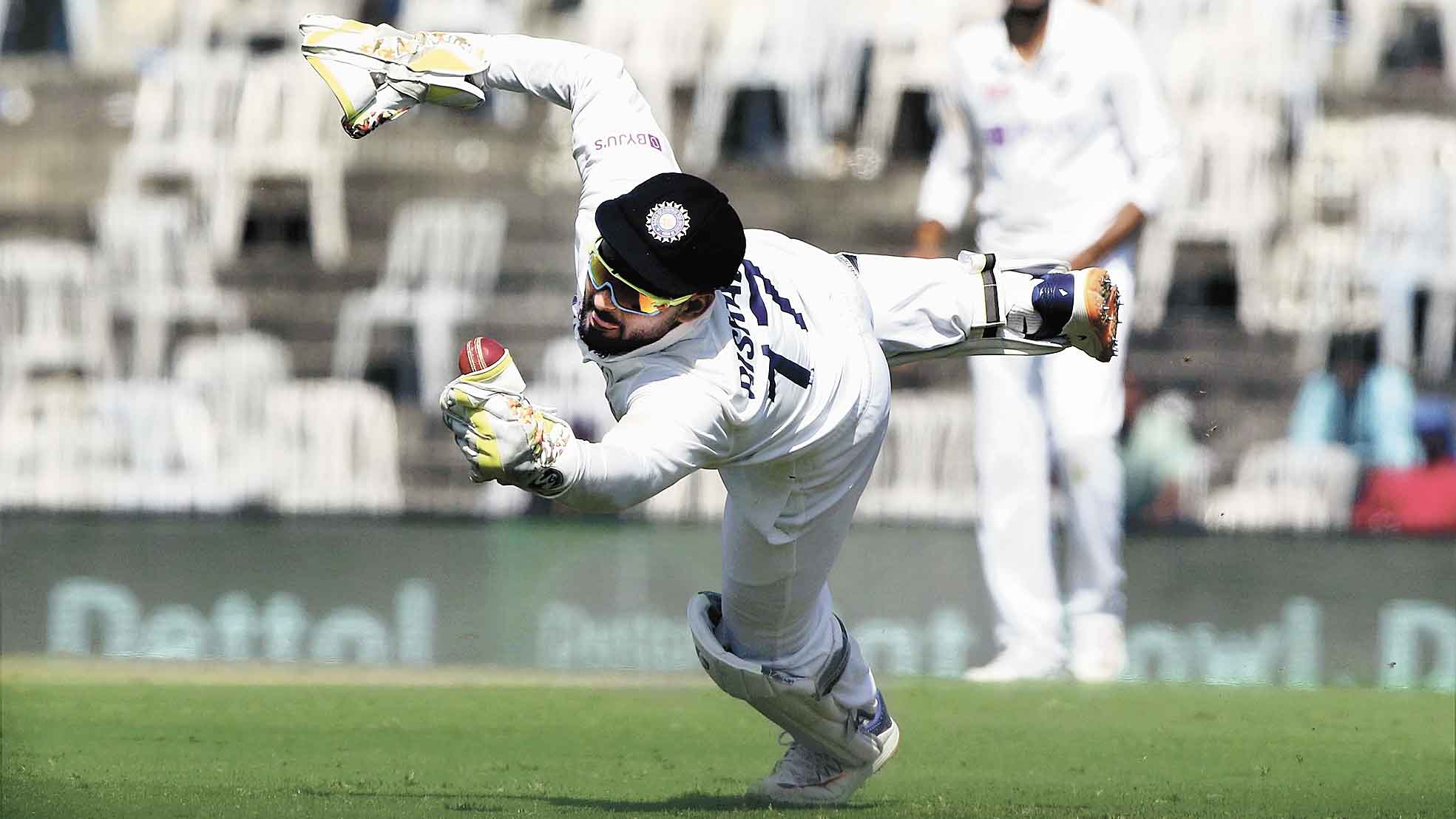 England’s heroics from the first Test fizzled out to a meek surrender in the second as the Indian spinners, on a track made for them, made the ball twist and turn beyond the visitors’ control.

Ravichandran Ashwin (5/43) did exactly what India wanted him to, making optimum use of the conditions. Debutant Axar Patel too complemented his senior colleague really well. But even then one expected a better resistance from England, who had stunned their hosts in the series opener at the same venue.

An over-defensive mindset and sheer lack of application by the batsmen saw England skittled out for a paltry 134 on Day II of the second Test in Chennai. And then, in India’s second innings, Rohit Sharma once again showed the visitors how to play spinners on a rank turner as the hosts reached 54/1 at stumps on Sunday, extending their overall lead to 249.

Rohit was a tad fortunate too when, in spite of not offering a shot (with the bat positioned well behind his front foot) and ball on track to hit the stumps as shown by ball-tracking technology later, he was adjudged not out after England opted for a review.

To England’s dismay, on-field umpire Virender Sharma was of the view that Rohit had tried to play the ball and he conveyed it accordingly to the third umpire.

Barring that, Rohit never had much difficulty playing Jack Leach or Moeen Ali. Following up on his splendid first-innings knock, Rohit was again precise in his footwork, which has been the key to his success on the tricky surface of Chepauk.

To make matters worse for England, after their spineless showing with the bat, Moeen repeated the mistakes he made with ball during the first innings by continuing to over-pitch and that allowed Rohit and Shubman Gill get some quick runs early on. As if excluding James Anderson wasn’t enough, England would rue leaving out off-spinner Dom Bess and bringing in Moeen, who last played a first-class game some 17 months back.

Moeen did finish with four wickets in India’s first innings, but that came at the expense of 128 runs and at an economy rate well over four. Those are poor numbers for a spinner on a turner.

With the bat too, Moeen was dismissed tamely off Axar’s bowling, when Ben Foakes (42 not out) kept defying Ashwin and Co. from one end. Foakes applied himself, but some of his illustrious teammates didn’t. And that includes skipper Joe Root as well.

Despite being in red-hot form, Root made a hash of what’s considered to be his strength — the sweep — giving Axar his maiden Test scalp. Soon after, Ashwin landed another major blow by deceiving Ben Stokes with the dip. Ashwin certainly deserves all the credit for setting Stokes up, but the ace all-rounder had also committed too early to play such a shot.

While England wobbled, India’s bowlers bowled the right lengths and let the pitch do the rest.

“It’s going to be tough. We need something very, very special to happen from hereon,” was how batting coach Graham Thorpe summed it up.

“Special” appears to be an understatement how things stood at close of play on Day II. England need a miracle.

Ravichandran Ashwin celebrates with teammates the wicket of Dom Sibley, one of his five victims, on Sunday.
PTI

• Ravichandran Ashwin now has 268 wickets in India in 45 Test matches. Only Anil Kumble has more, 350 wickets (in 63 matches). Ashwin eclipsed Harbhajan Singh’s tally of 265 wickets at home (in 55 Tests).

• Ashwin’s 5/43 in England’s first innings was his 23rd five-for at home. He is two short of Kumble, who has 25 five-wicket hauls at home.

• The wicket of Stuart Broad was Ashwin’s 200th of a left-handed batsman, the first bowler to reach this milestone. He also has 191 right-handed victims. Sri Lanka’s Muttiah Muralitharan has scalped 191 left-handed batsmen, while James Anderson (England) has 190.

• The 15 wickets that fell on the second day equals the most that have fallen at the ground in Test cricket. The first two instances came in the Test against West Indies on the 3rd day on January 14, 1979, and then on Day 4 of the first Test of the ongoing series (February 8, 2021).

• England conceded zero extras in India’s first innings total of 329 - the highest total in a Test innings without any extras. The previous highest was Pakistan’s 328 during which the Indian bowlers did not concede a single extra in 187.5 overs in 1955.

• There were a total of four ducks in India’s first innings of the ongoing Test. It is the ninth time that an Indian innings at home has seen four or more ducks. The previous such instance was in 2008, against South Africa in Ahmedabad.