Lakshya Sen, Kidambi Srikanth, HS Prannoy, Chirag Shetty and Satwiksairaj Rankireddy achieve what even Padukone or Gopichand could not 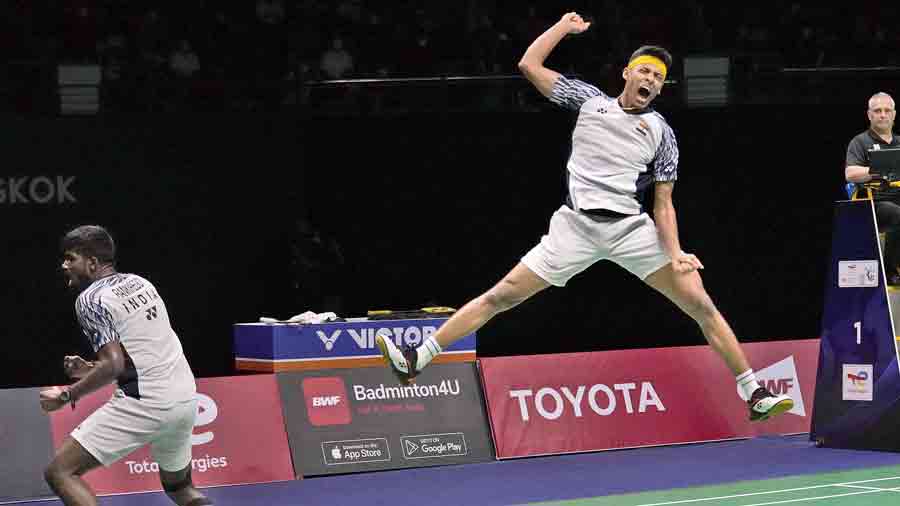 Fortytwo years ago, in 1980, Prakash Padukone had caught the nation’s imagination by winning the All England badminton championship. Twentyone years later, in 2001, Pullela Gopichand announced his arrival by emulating Padukone’s feat.

And then, after Gopichand took up coaching, it was all about Saina Nehwal and PV Sindhu. Three Olympic medals since the 2012 London Games and a world championship gold — these two super women’s consistent success on the big stage had eclipsed men’s badminton.

On Sunday, in Bangkok, the men have finally found their way back.

India stunned Indonesia 3-0 to win their maiden Thomas Cup title — which can be termed a team event world championship. The likes of Lakshya Sen, Kidambi Srikanth, HS Prannoy, Chirag Shetty and Satwiksairaj Rankireddy have achieved something that even Padukone or Gopichand could not do during their playing days.

Malaysia on Thursday, Denmark on Friday and 14-time winners Indonesia on Sunday — a week back if someone had said that the Indian men would beat much stronger opponents in the quarters, semi-finals and final, he would have been laughed at. But yes they have done it and in style.

Badminton has long been embedded in the Indian conscience. Remember Jeetendra and Leena Chandavarkar grooving to Dhal gaya din ho gayi sham with badminton racquets in their hand from the 1970 movie Humjoli? But that was an amateurish portrayal of the game. Indian badminton of today is a far serious business.

Think of young Lakshya Sen. In the build-up to the final he had looked down and out after losing his matches in the quarters and the semi-finals. The pressure was on him to deliver. Playing against the higher-ranked world No.5 Anthony Sinisuka Ginting, Sen brought out his best to comeback from a game down and win 8-21, 21-17, 21-16.

In the third game, after the switch of sides with the Indonesian leading 11-7, Sen was at his best. Ginting had no answer to his rivals’ array of shots and the world championship bronze medallist was soon leading 12-11.

As he took control of the game, a jittery Ginting started making errors. Sen then made an audacious reverse backhand to make it 18-14 and held firm to take the game and match 21-16. He slumped on the court in disbelief and the winning start that India were looking for, was sealed.

“Being three-four points down didn’t matter because I knew I was going to play from the better end and I can open up and he will be under pressure,” the 20-year-old Sen said after the tie.

“This one is for the team… They have been backing me throughout.”

Sen’s dramatic win set the tempo for the rest of the match. The doubles duo of Rankireddy and Shetty showed nerves of steel as they saved four match points in the second game to beat Mohammad Ahsan and Kevin Sanjaya Sukamuljo 18-21, 23-21, 21-19.

Yes, the Indonesian pairing was new, but they were still formidable.

Rankireddy and Shetty though were in a different mood. Even when it seemed the Indonesians would win to draw level at 1-1, the world No. 8 pair refused to wilt. Smashes into the body, a between-the-legs return — they were doing everything.

As they won the third game and the tie 21-19, Chirag leapt in joy, knowing India were on the brink of a great triumph.

Srikanth ensured that the match did not go into the fourth doubles. He defeated Jonatan Christie 21-15, 23-21. The match was over when Christie had no answer to Srikanth’s brilliant high-jump smash. He pumped his fist and there was unbridled euphoria in the Indian camp.

“It will actually take a while, before you know what has actually happened. I don’t think this is an individual’s win. It is about all the 10 players and the support staff. Everyone stepped up when it mattered,” Srikanth later said in a virtual news conference.

True. As singles coach Mohammed Siyadath Ulla added: “It’s the team spirit which was the key to the success. Everyone bonded well right from day one.”

The Indian men’s badminton team has done a first. Its maiden Thomas Cup medal is made of gold.