Advertisement
Home / Sports / From Neeraj's gold to hockey bronze, a look at how 2021 went by

From Neeraj's gold to hockey bronze, a look at how 2021 went by

2022 will also be a sports heavy calendar, comprising events such as the Asian Games and CWG 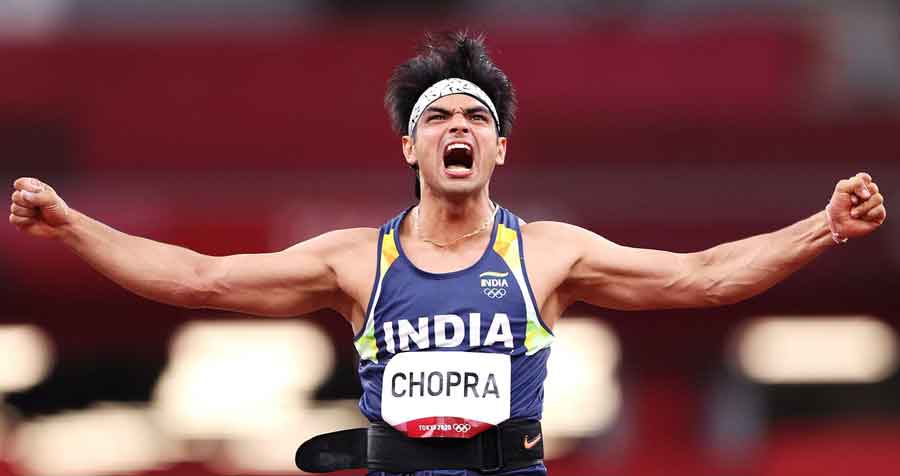 From weightlifting, to the Olympics, to badminton — Indian sportspersons left their mark in the world of sports successfully. Javelin star Neeraj Chopra took the cake, but there were others too who shone brightly while competing against the best. The Telegraph looks back at the year that went by...

Dec. 19: Kidambi Srikanth (picture above) became the first Indian male shuttler to win a silver medal at the BWF World Championships in Huelva, Spain. Having already walked into the record books as the first Indian man to enter the singles final, Srikanth ran into Singapore’s Loh Kean Yew and lost the summit clash 21-15, 22-20 in 43 minutes. The 12th-seeded Indian came out all guns blazing and took an early 9-3 lead, but Yew bounced back, winning the first game 21-15. Yew carried on with the momentum to win in straight games. “To reach the final of World Championships is something that I really worked hard for,” Srikanth said. Part of the hard work was also the anxiety he faced ahead of the tournament, waiting for a visa that was delayed, almost robbing him of an opportunity to play in Huelva.

April 17: Weightlifter Mirabai Chanu (in picture) smashed the world record in the women’s 49kg clean-and-jerk with a lift of 119kg and went on to win the bronze medal at the Asian Championship in Tashkent, Uzbekistan. In her first international meet in over a year, Mirabai lifted 86kg in snatch and 119kg in clean and jerk for a total of 205kg. She was off to a shaky start as she failed to lift 85kg in her first two snatch attempts. She then lifted 86kg in her final attempt, finishing fourth. But the scene changed in the clean-and-jerk, with Mirabai beginning with a 113kg and then lifting 117kg successfully for her personal best. The Indian then bettered her own performance, hoisting 119kg, more than twice her body weight to set the world record and clinch the bronze.

June 7: Sunil Chhetri (picture below) surpassed Argentine superstar Lionel Messi to become the second-highest active international goal-scorer, behind Portugal’s Cristiano Ronaldo, with 74 strikes. The 36-year-old Chhetri achieved the feat with his brace against Bangladesh in the joint preliminary qualifying round match for the 2022 Fifa World Cup and 2023 AFC Asian Cup. He helped India register a 2-0 win, their first victory in six years in World Cup qualifiers. At the Jassim Bin Hamad Stadium in Doha, Chhetri broke the deadlock in the 79th minute when he headed in Ashique Kuruniyan’s cross from the left, and then sealed the victory by curling in a shot from long range in added time.

Aug. 30: Sumit Antil won gold in the men’s javelin F64/44 final with a world record throw of 68.55m at the Tokyo 2020 Paralympic Games. The achievements in Paralympic sport is often overlooked, but here was a 22-year-old who bettered his own world record three times in a span of six throws.  He was consistently impressive through the competition, posting throws of 66.95m, 68.08m, 65.27m, 66.71m and 68.55m. The wrestler-turned-javelin thrower later revealed that he was actually quite nervous during the finals and should have managed an even better result. “It is a dream come true. I can’t express my feelings right now.This is my first Paralympics and I was a little nervous. I was hoping for a 70m-plus throw, maybe I can do 75m. It was not my best but I am very happy to break the world record,” Sumit (picture top) said.

Sept. 21: There’s no stopping Pankaj Advani, who clinched his 24th world title, winning the IBSF 6-Red Snooker World Cup with a 7-5 victory over Pakistan’s Babar Masih in the final in Doha. He had also successfully defended the Asian Snooker Championship title in the same fortnight. “I am living a dream. ... These two back-to-back triumphs assure me that my hunger hasn’t diminished.”

• Ever since Abhinav Bindra won a gold medal at the 2008 Beijing Olympics, one question bugged every sports lover of the country — when will India get its second individual Olympic gold? Tokyo Olympics provided the answer. Neeraj Chopra  stunned the nation and the world to clinch the gold medal in javelin with a throw of 87.58m. It was India’s first track-and-field medal at any Olympic Games post Independence.

• Year after year, Indian hockey fans had to console themselves with stories from the team’s glorious past. But this time, the Indian men’s hockey team ended the country’s 41-year-old wait for an Olympic medal, winning the bronze in Tokyo. After being 1-3 down at one point, India made a stunning comeback to beat Germany 5-4 in the bronze medal play-off. The last time India had won a medal in hockey was at the 1980 Moscow Games, where the team had clinched gold.

Jubilation after winning the hockey bronze

• India won a total of seven medals from the Tokyo Olympics, making it their best-ever haul at a single edition of the Games. Shuttler PV Sindhu (picture above) got a bronze, becoming the first Indian woman and only the second Indian athlete after Sushil Kumar to win two individual Olympic medals. Weightlifter Mirabai Chanu lifted a total of 202kg to bag the silver medal in the women’s 49kg category. Wrestler Ravi Kumar Dahiya had to settle for a silver losing to Zavur Uguev in the 57kg freestyle final. Fellow-wrestler Bajrang Punia won a bronze in the men’s 65kg freestyle category. Boxer Lovlina Borgohain (picture below) impressed all, returning with a bronze from the women’s 69kg category.