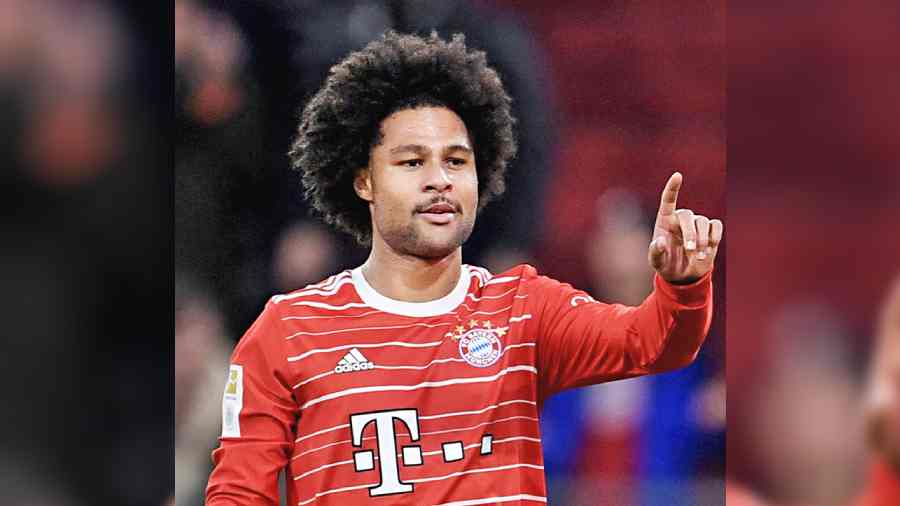 Bayern Munich’s Serge Gnabry celebrates after scoring their fourth and his second goal against Werder Bremen in Munich on Tuesday.
Twitter
Reuters   |   Calcutta, Munich   |   Published 10.11.22, 05:10 AM

Senegal forward Sadio Mane is in doubt for the World Cup after Bayern Munich said on Wednesday he would miss the last league game before the tournament with a leg injury.

Bayern said the two-time African player of the year had an injury to the head of the fibula bone in his lower right leg.

Bayern didn’t specify how serious the injury might be, saying only that Mané would not be available to play Schalke on Saturday. “Further examinations will follow in the coming days. FC Bayern is also in contact with the medical staff of the Senegalese Football Association,” Bayern said in a statement.

Mane was in clear discomfort after a blow to the right leg early in Bayern’s 6-1 win over Werder Bremen on Tuesday and was substituted in the 20th minute.

Champions Bayern opened up a four-point lead at the top of the table.

Bayern’s fifth straight league win, which included a Serge Gnabry hat-trick, equalled the Bundesliga record for the longest unbeaten run against one team, with Bayern having now gone 26 league matches without a defeat against Werder.

They also have the second best attack in the history of the Bundesliga with 47 goals from 14 matches, one less than their run at the same stage in the 1976-77 season.

ATK Mohun Bagan will hope to grab the second place with a win as they host NorthEast United FC in the ISL IX at the Salt Lake Stadium on Thursday.

A late goal against Mumbai City secured a point for ATK Mohun Bagan in their last match. The Mariners have been the most prolific team in front of goal this season, scoring 10 goals in four games so far.