Wahbi Khazri has put Tunisia ahead against France 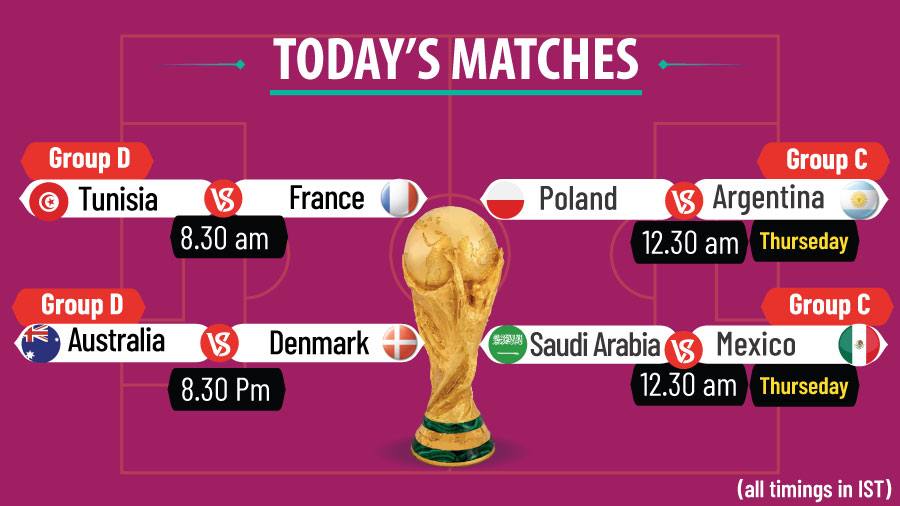 Tunisia beat France by 1-0 in a match in which both the teams were tied 0-0 at halftime of their final Group D game at the World Cup on Wednesday, with the North Africans dominating but failing to break the deadlock against a reshuffled and already-qualified reigning champions.

Nader Ghandri flicked a free kick home on eight minutes but the goal was ruled out for offside as Tunisia piled on the pressure. As it stands, France top the group and will be joined into the last 16 by Australia, who were goalless at halftime with Denmark.

Kylian Mbappe and Antoine Griezmann will be on the bench for France's clash against Tunisia at the World Cup as coach Didier Deschamps rung the changes for their final Group D game on Wednesday, reports Reuters.

Forward Mbappe, who has scored three goals in the first two games, is given a breather as is attacking midfielder Griezmann and seven other players who started in the 2-1 win against Denmark last week.

France have already qualified and are almost certain of finishing top of the group while Tunisia will advance if they win and Australia draw against Denmark in the other game.

Australia make Round of 16 for first time since 2006

Be it any sport, never write Australia off. The Socceroos have now qualified for the Round of 16 after beating Denmark 1-0.

Australia were clinging on to a 0-0 draw against Denmark at halftime in their World Cup Group D match at Al Janoub Stadium on Wednesday, which would be enough to reach the last 16 as things stand with Tunisia drawing 0-0 with France, reports Reuters. Denmark's Jesper Lindstrom had a shot blocked and Mathias Jensen had an effort parried over by Australia keeper Mat Ryan, while Riley McGree had a shot for Australia saved by Kasper Schmeichel.

Kasper Hjulmand has chosen Martin Braithwaite to spark the Denmark attack as they chase the win they need against Australia in their Group D game at the Al Janoub Stadium if they are to progress to the last 16 of the World Cup, reports Reuters.

Braithwaite replaces Andreas Cornelius to become the third Danish striker to lead the line in three games, with Mikkel Damsgaard dropping to the bench to be replaced by Andreas Skov Olsen and Mattias Jensen coming in for Victor Nelsson.

Australia are sitting pretty in second place in Group D as the Danish attack, which scored 30 goals in qualifying, has failed to fire in Qatar. Defender Andreas Christensen got their only goal so far in the 2-1 loss to France.

For Australia, Milos Degenek comes in for Fran Karacic at right back, with a draw likely to be enough for them to go through.

Defending champion France have not won their three World Cup group-stage matches since winning their first title in 1998.

Tunisia haven’t even won three matches in their World Cup history, but must beat France on Wednesday to have any chance of advancing to the Round of 16 in Qatar. And Tunisia’s coach Jalel Kadri is feeling the heat.

Two of the most intimidating strikers in world football, Argentina’s Lionel Messi and Poland’s Robert Lewandowski, will line up against each other at Stadium 974 on Wednesday with a World Cup last-16 place at stake.

Messi has already come to  Argentina’s rescue in Qatar, and might have to do so all over again in a match with so much on the line.

After their stunning win over the Argentines,unfancied Saudi Arabia are firmly in the mix ahead of their game against Mexico on Wednesday.

In their five previous participations, Saudi Arabia have qualified for the Round of 16 only once, at USA 1994. In Qatar, Poland lead Group C on four points, one ahead of Argentina and Saudi Arabia, while Mexico are on one point.

If Saudi Arabia wish to progress, they will have to beat Mexico, regardless of the outcome of the match between Poland and Argentina.

A win will do for Saudi Arabia