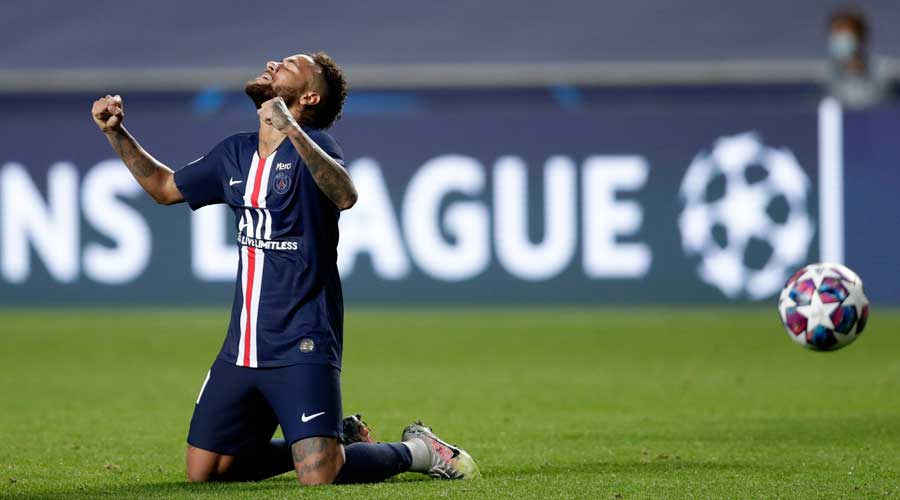 Neymar celebrates at the end of the Champions League semifinal soccer match between RB Leipzig and Paris Saint-Germain at the Luz stadium in Lisbon.
AP
Agencies   |   Lisbon   |   Published 20.08.20, 02:28 AM

Kylian Mbappe said he is feeling similar vibes as during France’s World Cup winning campaign in 2018 after Paris St Germain reached their maiden Champions League final with an emphatic 3-0 win against RB Leipzig on Tuesday.

Goals from Marquinhos and Angel Di Maria, who was brilliantly set up by Neymar, put PSG 2-0 up at the interval and Juan Bernat added the third in the 56th minute for what was a comfortable victory at the Estadio da Luz.

“I feel the same vibes because we managed to create a group where everyone knows their importance and everyone do their job,” the France striker told a news conference.

“We do a lot of activities outside the pitch, maybe it’s too much for some but that’s how you win titles. It’s easier to make efforts and sacrifices for your teammates if they are your friends.”

Mbappe produced a below-par performance against Leipzig, but he is just back from an ankle injury and still lacks match practice.

He played half an hour in the 2-1 quarter-final win against Atalanta, helping PSG turn the tide as they were 1-0 down. “When I got injured against St Etienne (in the French Cup final on July 24), I though the Champions League was over for me,” the 21-year-old said.

“But the morning after I told myself I needed to be part of this journey, even if I didn’t play, at least to bring my good mood to the team.”

PSG have gone out in the last 16 for the past three years, but they proved a step too far for Leipzig, who were playing in the regional leagues just 11 years ago.

The Germans, financed by the Red Bull energy drink company, have outperformed all expectations by reaching the last four, knocking out Tottenham Hotspur and Atletico Madrid en route.

“We showed quality and determination. A good mix. We deserved to win,” said Tuchel, who had faced a heavy expectation to deliver in Europe this season.

“I felt the pressure, it was not easy. I have players who are used to playing with this pressure, who like this pressure and these decisive matches.”

PSG have only conceded five goals in 10 games, the best record in this season’s competition, and on Tuesday, they were solid again in a 4-3-3 formation.

“I was never relaxed, but how we defended was also the most important thing for me,” said Tuchel. “Before the game I felt the pressure. I have players who are used to that kind of pressure.”

World Cup winner Presnel Kimpembe and Thiago Silva were at their best in central defence while full back Juan Bernat once again raised his level in the Champions League and also got on the scoresheet.

The defensive midfielders — Ander Herrera, Leandro Paredes and Marquinhos — proved to be a nightmare for their counterparts as Leipzig were easily outplayed.

PSG had the right balance but Tuchel said they still needed to adapt against the young German side. “Yes, we adapt to all our opponents, but not too much,” Tuchel noted.