Manchester City in a 'Real' test of nerves 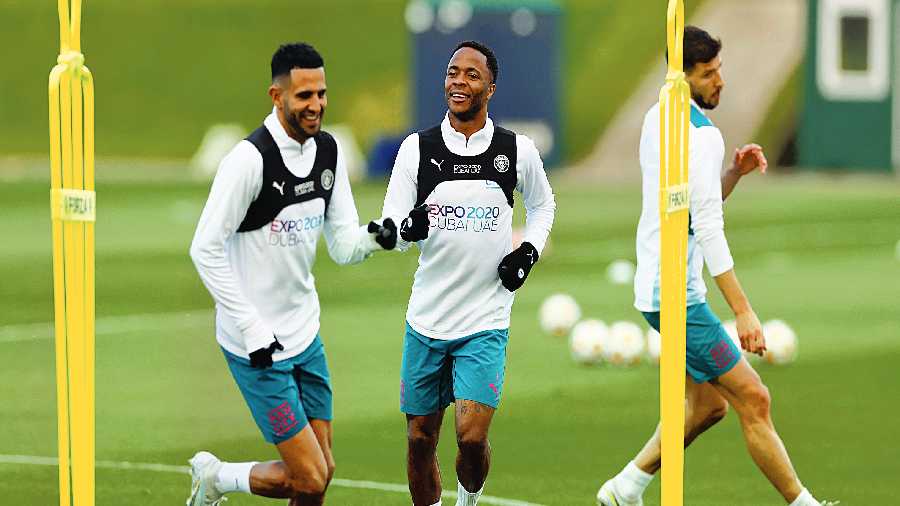 (From left) Manchester City’s Riyad Mahrez, Raheem Sterling and Ruben Dias during a training session in Manchester on Monday.
Reuters
Agencies   |   Published 26.04.22, 04:35 AM

Manchester City manager Pep Guardiola says his team, who face Real Madrid in their Champions League semi-final, first-leg on Tuesday, need to put aside the different European pedigrees of the two clubs and draw on their collective strength.

Real have won Europe’s top trophy a record 13 times while City remain in search of their first Champions League title after losing in the final to Chelsea last year.

“If we have to compete with their history, we don’t have a chance. It speaks for itself,” said the former Barcelona coach, when reminded of the contrasting records of the two clubs.

“We have the desire to compete against them. For us playing against them is an incredible test and we want to try it. We will suffer when we suffer, (but) stick together. Try to do as best as possible.”

Guardiola also talked down the significance of the role of himself and Carlo Ancelotti in the game, saying that in the Champions League, games are won by the decision making of players on the field.

“History is there, we can’t change it, but it’s eleven against eleven and one ball moving. The players decide their decision making,” he said.

“You can imagine a plan but it’s eleven versus eleven, the quality of the players, how strong they are, it will make a difference. This game is players, it won’t be Carlo or myself who win it.”

There is some history that is in City’s favour, however — two years ago Guardiola’s side knocked the current La Liga leaders out of the competition in the last 16 stage after winning both legs 2-1.

City may have to take on Real without their first choice right back Kyle Walker and central defender John Stones, who are both doubtful with injuries.

Walker has been struggling with an ankle injury picked up against Atletico Madrid in the previous round and Stones is battling with a hamstring strain he gained in the midweek win over Brighton.

“They are doubts, Kyle didn’t train in the last 10 days, John since Brighton. We will see how they feel, (and) take a decision,” said Guardiola.

Luka Modric orchestrated stirring Real comebacks against Paris Saint-Germain and Chelsea. Now the 36-year-old has City and another final in his sights.

Modric’s mesmeric, curving pass with the outside of his right foot for Rodrygo to volley-in resuscitated Real against Chelsea, just when it looked like they were dead and buried.

His eye-of-a-needle pass through the legs of Presnel Kimpembe for Karim Benzema to finish gave the Spaniards life against PSG, levelling a contest that until that point had gone almost entirely in the opposition’s favour.

Modric’s craft and guile, along with Benzema’s ruthless finishing, have been Real’s most devastating weapons en route to the semi-finals.

But the Croatian international midfielder is a warrior, too, lifting Real in their most desperate moments through his grit, resilience and sheer force of will.

“What Modric does, only Modric does,” former Real striker Jorge Valdano said last month. “When the ball passes through his feet, the play just flows like it’s the easiest thing in the world.”

City midfielder Ilkay Gundogan agreed. “Luka is a magician. His assist for Rodrygo against Chelsea left me speechless,” Gundogan said. “The way he plays always seems smooth and calm.

“When he won the Ballon d’Or (in 2018), I was so happy because it was finally a player in my position. He and Toni Kroos do a great job. They have been important to Real for so many years now, under different coaches,” the German international added.