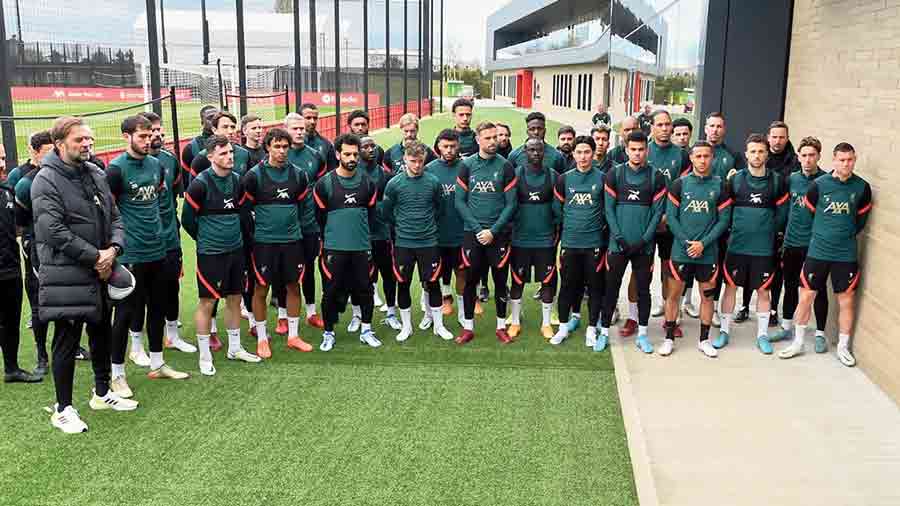 Liverpool players and support staff observe a minute’s silence at the Hillsborough Memorial at the AXA Training Centre on Friday.
Twitter
Agencies   |   London   |   Published 16.04.22, 12:20 AM

Liverpool are dreaming of a quadruple and Manchester City are targeting a treble. Someone has to yield when England’s top two teams meet in their FA Cup semi-final match at Wembley Stadium on Saturday.

Their 2-2 draw last weekend didn’t move the needle much in the Premier League title race with City maintaining a one-point lead. It will be a different story at Wembley.

“It’s a really intense fight on a really high level,” Liverpool manager Juergen Klopp said. “City were really strong last week and we were not at our best. So, I would like to see a game where we are at our best, as well.”

Liverpool clinched the League Cup in February by beating Chelsea on penalties after 120 minutes of scoreless play also at Wembley. The intensity was “insane,” Klopp said, and he expects the same on Saturday after both sets of fans navigate around rail closures to get to London.

Liverpool and City have also advanced to the semi-finals of the Champions League and could meet in the final next month in Paris. City got past Atletico Madrid but at a cost as midfielder Kevin De Bruyne and defender Kyle Walker went off injured from the bruising goalless game, which allowed the visitors to advance 1-0 on aggregate.

City manager Pep Guardiola told BT Sport that “we are in big trouble” with the injuries. “Fatigue is another factor,” Guardiola said in his post-match news conference.

“A lot of games in our legs,” he said. “The travel after the Liverpool game was so demanding, and we dropped in the second half (against Atletico).”

Liverpool, on the other hand, were able to rotate players for their second-leg match against Benfica at Anfield, thanks to a 3-1 first-leg lead. They advanced 6-4 on aggregate after a 3-3 draw with defenders Virgil Van Dijk, Trent Alexander-Arnold and Andy Robertson getting the night off. Fabinho, Mohamed Salah and Sadio Mane came on as substitutes. “It’s just a necessity,” Klopp said of resting players.

Klopp added he would will make a late assessment of Diogo Jota'’ fitness after the forward sustained a knock on Wednesday.

No Premier League club has ever won all four trophies in the same season. Liverpool have not won the FA Cup since 2006, while City were victorious in 2019 when they completed the domestic treble.

Romelu Lukaku could return for Chelsea on Sunday when they play Crystal Palace in the other semifinal match at Wembley. The Belgium striker missed the past two games with a leg injury. “Romelu was back in training yesterday (Thursday),” Chelsea manager Thomas Tuchel said on Friday. “Let’s see if he has any reaction or not.”

Crystal Palace are the only team remaining who have never won the FA Cup. Palace midfielder Conor Gallagher will have to sit out because he’s on loan from Chelsea, which rejected Palace’s official request to allow him to play on Sunday.

Tuchel ran into the 22-year-old Gallagher recently at a restaurant. “The subject came up and I apologised because I know how competitive he is, and I like him a lot,” Tuchel said. “The rules were clear when we made the loan.”

The cup would be consolation for Chelsea who were knocked out of the Champions League this week, ending their European title defence. They last won the FA Cup in 2018.