East Bengal get goal & win, a bit late in the day

A goal fest at the Kishore Bharati Stadium 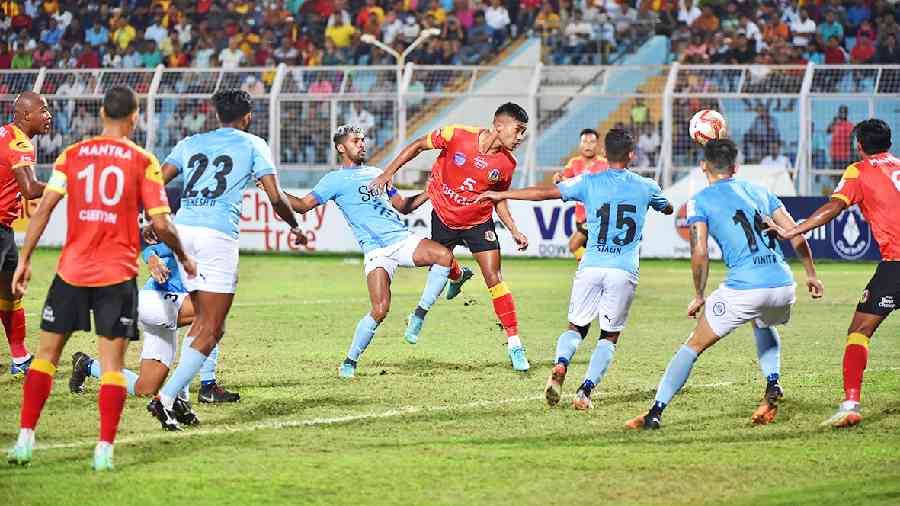 Action during the Durand Cup Group B match between Emami East Bengal and Mumbai City at the Kishore Bharati Stadium on Saturday.
Picture courtesy Durand Cup
Our Bureau   |   Calcutta   |   Published 04.09.22, 03:36 AM

Emami East Bengal became the second team on Saturday to finish on a high, getting the better of Mumbai City 4-3 in an exciting Group B encounter of the Indian Oil Durand Cup, at the Kishore Bharati Stadium.

In the first, Army Red had defeated Hyderabad FC 1-0 to end their campaign on a winning note. Sumit Passi and Cleiton Silva got two goals each for East Bengal, while Lallianzuala Chhangte had a brace as well for Mumbai, where a crazy first half saw six of the seven goals being scored.

Greg Stewart scored the other goal for the losing team. East Bengal thus finished with five points from their four games, while Mumbai City, who are already in the last-eight stage with seven points, topped the group.

It was not only East Bengal’s first win of the season, but also the first time they had scored and they made it up by netting as many as four goals.

The final game in the group between Rajasthan United FC and Indian Navy on Monday will determine who among ATK Mohun Bagan and Rajasthan take the second qualifying spot for the knockouts.

It was a frantic start to the game with Mumbai City defender Gursimrat Singh picking up a booking as early as in the seventh minute.

Cleiton had his first shot on target in the 17th minute which Mohammed Nawaz saved but seconds later Semboi Haokip snatched the ball in the middle of the rival half and played Jerry Lalrinzuala down the left just outside the box.

The wing-back drove in and delivered a cross which found Passi unmarked at the far post.