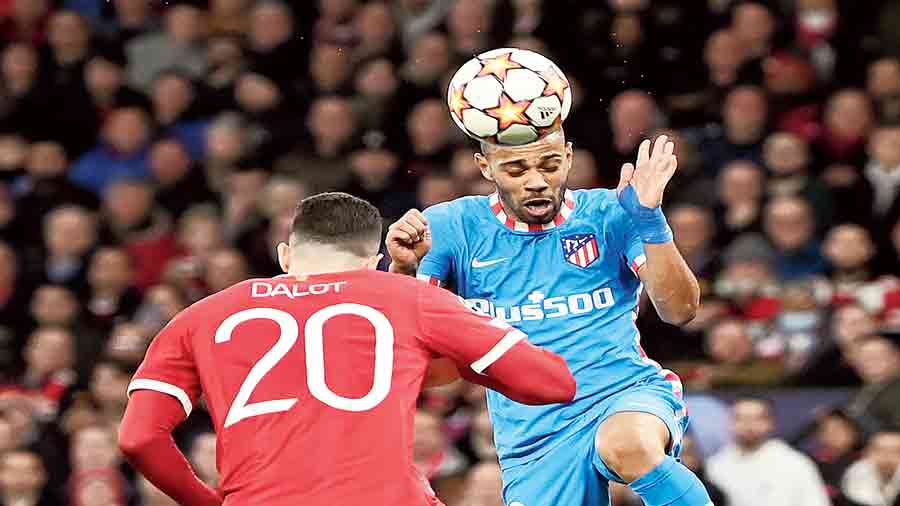 Atletico Madrid knocked Manchester United out of the Champions League and moved into the quarter finals after a 41st-minute header from Brazilian Renan Lodi gave them a 1-0 (2-1 aggregate) win at Old Trafford on Tuesday.

It was a typical display of gritty defending and swift counter-attacking for which Diego Simeone’s Atletico have been known while United, for all their pressure, were unable to create enough quality opportunities to get themselves the goal they needed.

The Spanish champions may not be favourites to reach the final in Paris on May 28 but none of the teams in the last eight will be hoping to be drawn against them.

After Saturday’s win over Tottenham Hotspur,  there was a positive mood around Old Trafford and the night began brightly for United with Anthony Elanga forcing a fine reflex save out of Jan Oblak with a near post flick from a Bruno Fernandes cross.

United’s keeper David de Gea then produced an outstanding diving save to push wide a long range effort from Rodrigo De Paul. Joao Felix then had the ball in the net, tapping in a cross from Marcos Llorente but the effort was ruled out for offside.

There was no reprieve though for United, when after a trademark Atletico counter-attack, a clever flick from Felix found Antoine Griezmann whose cross was nodded in at the back post by Lodi.

United argued that the move had followed a foul on Elanga deep in Atletico’s half but referee Slavko Vincic waved away their protests.

Interim manager Ralf Rangnick threw on forwards as he sought the breakthrough bringing on Marcus Rashford and Edinson Cavani to play up front with Ronaldo and Jadon Sancho. But his decision to take off Fernandes in the 67th minute left the team short of creativity and their attacks were increasingly one dimensional charges at the Atletico back line.

Captain Harry Maguire was taken off, to cheers from the home support, as Rangnick threw on Spanish winger Juan Mata but the nearest United came to an equaliser was a fine header from Raphael Varane that had Oblak at full stretch.

It was scrappy and at times cynical from Atletico in the latter stages but their disciplined defence held firm for the victory that sends them into the last eight. Rangnick was upset with the refereeing of the game but had few complaints about his team’s performance.

“I think we played a very good first half — exactly the way we wanted to play with a high energy level but we couldn’t convert that into one or two goals,” he said.

Atletico coach Simeone was full of praise for his team’s commitment. “This team will dive into a swimming pool whether there is water in it or not,” he said.

“When the team works as a team like this, it excites me. We were competitive... in the second half there was brilliant collective work, one of the  best this season, which leaves me happy,” he said.

Striker Darwin Nunez headed home a 77th-minute winner as Benfica grabbed a shock 1-0 victory away at Ajax Amsterdam on Tuesday to secure a surprise quarter-final place. The Uruguayan striker rose above the Ajax defence to score from a free-kick in a rare attack for the Portuguese club, who put up a stout defensive performance at the Johan Cruyff Arena to advance 3-2 on aggregate.