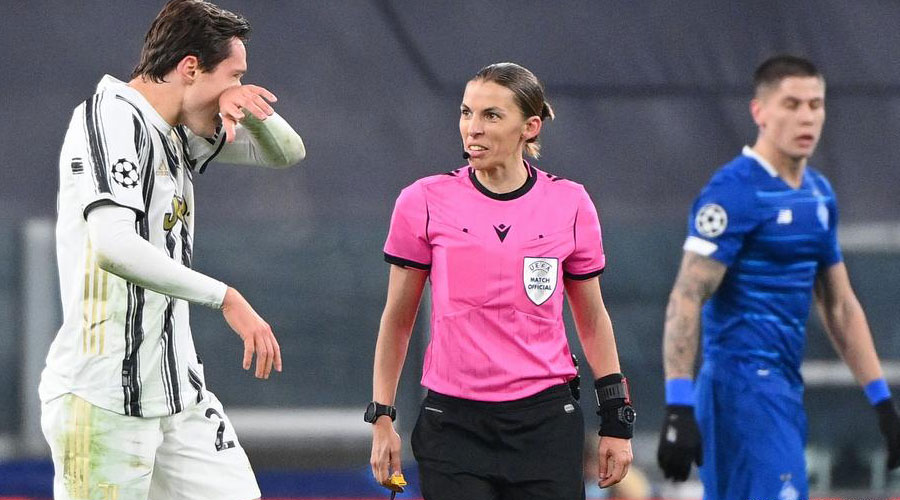 It takes a thick skin and real determination to become a top-level referee, and that's even more true for women. The men's World Cup in Qatar will feature six female officials and they've all had to come up the hard way.

The last time Neuza Ines Back was in Qatar for a game, she was part of the officiating team at the 2020 Club World Cup final, as European champions Bayern Munich beat Mexican giants Tigres 1-0 in Al Rayyan.

Back, from western Brazil, had already officiated top-level games in her homeland, as well as the 2019 Women's World Cup in France. Now she was reserve assistant referee at FIFA's flagship club event, alongside her compatriot Edina Alves Batista, the fourth official.

At the post-match presentation ceremony, Sheikh Joaan bin Hamad Al Thani, of the Qatari royal family, jovially bumped fists with male players and officials as they filed past him to collect their medals. But when Back and Batista reached him, Al Thani appeared to look right past the two women as though they did not exist.

While Islamic law prohibits men from physically touching women who are not members of their immediate families, it does not restrict them from being courteous by lowering their eyes and making gestures not related to touch.

Footage of the incident quickly went viral. Organizers insisted it was a "minor misunderstanding" related to COVID-19 hygiene protocols, but it was interpreted by Qatar critics as further evidence that the Gulf state with its strict laws is unsuited to hosting global sports events.

Now, Back is set to return to Qatar as one of six women on the 129-member officiating team at the men's World Cup in November. She'll take her place alongside fellow assistants Kathrnyn Nesbitt (US) and Karen Diaz Medina (Mexico), plus head referees Stephanie Frappart (France), Yoshimi Yamashita (Japan) and Salima Mukansanga (Rwanda).

It's a first for the tournament, and it comes in its most controversial edition yet, with the middle eastern country accused by human rights organizations of using football as a "sportswashing" platform to deflect from reports of human rights violations — including gender discrimination.

Though the ratio of female referees to male referees at the tournament remains low, analysts say the move is significant, especially in a country where women can, quite literally in the case of Back and Al Thani, be overlooked.

"That it is happening in Qatar is a powerful statement," said Erin Blankenship, co-founder of Equal Playing Field, a nonprofit pushing for better representation of women in sports.

"I don't expect the World Cup to have a 50/50 gender split," Blankenship said. "But I think it's getting to the point where it doesn't matter what gender you are: If you're good at your job you have every right to be on that field. For me, that's the goal."

A token for gender equality?

Not everyone considers female referees at the World Cup to be a positive change. Some football fans, notably men, have trolled the referees and denounced what they call a takeover of men's space.

Stephanie Frappart has taken more flak than most. The 37-year-old is one of France's top referees and became the first woman to officiate a men's UEFA Super Cup final (Liverpool vs. Chelsea) back in 2019, as well as a men's UEFA Champions League game (Juventus vs. Dynamo Kyiv) in 2020.

With an agile gait and an intense game face during matches, Frappart is also an intercontinental force, having been on the FIFA international referees list for over a decade and officiating high-profile games such as the tense Women's World Cup 2019 final, which saw the Megan Rapinoe-led US team defeat Netherlands.

But Frappart's success is a double-edged sword. The higher the profile, the greater the criticism, with former French international Jerome Rothen even dedicating a radio show to discrediting her Qatar selection, saying she is "not up to scratch.”

"When people say this, it's because they think that women will never be good enough for the best leagues, which happen to be men's games," Blankenship said. "But the female athletes who make it this far are usually the women prepared to push back and who have climbed many invisible mountains," she added.

While Frappart continues to battle chauvinism in France, her colleague Salima Mukansanga has faced different challenges in Rwanda.

Though Rwanda is ruled by the male autocrat Paul Kagame, nearly two-thirds of parliamentary seats are held by women.

Football referees, both male and female, are still the enemy to fans, including Mukansanga's own dad, who would berate the officials when his team lost.

When she was a girl, Mukansanga saw the referees, who command the players, as the most important figures in the game. So, when she completed her secondary education at 15, she headed straight into refereeing, steadily working her way up from the local Rwandan leagues to officiating some of the most important tournaments in the world.

The 33-year-old made headlines earlier this year when she became the first woman to referee two games at the Africa Cup of Nations tournament in Cameroon.

Before kickoff, Mukansanga was nervous, she told DW. There's greater pressure with men's games, because of the higher standards and because she is one of the first females to handle senior men tournaments. The support of excited fellow Rwandans weighed on her.

But she beat the fear. As Zimbabwe defeated Guinea, Mukansanga's face was an unreadable canvas as she sprinted after players with eagle-sharp eyes, oblivious to the audience stunned at the sight of a female referee.

When a Guinean forward patronizingly touched her arm to suggest that she reconsider a teammate's yellow card, Mukansanga said: "Do you want one yourself?" The forward very quickly left the scene.

The other female referees in Qatar will be Tokyo native Yoshimi Yamashita, who has officiated men's games in the Asia's AFC Cup and AFC Champions League; assistant Kathryn Nesbitt, an American chemistry professor and referee; and assistant Karen Diaz Medina, from Mexico.

There are still several arguments to make for better female representation in sports, but, for up-and-coming female referees, Qatar's referee lineup is confirmation that qualifications are taking precedence, said Eva Lotta Lockner, an amateur referee in the German city of Hamburg.

It means "that we actually stand a chance in getting selected for major male tournaments if we put in the work and show ambition," Lockner said.

Though FIFA's move is commendable, what happens after Qatar is just as important, Blankenship said.

''I am psyched that this is happening,'' she said. ''But let's take responsibility for institutional barriers against women and let's remove them.''