Alexander Isak, who plays for Spanish club Real Sociedad, had a shot from inside the area hit the post after deflecting off defender Marcos Llorente in front of the goal line 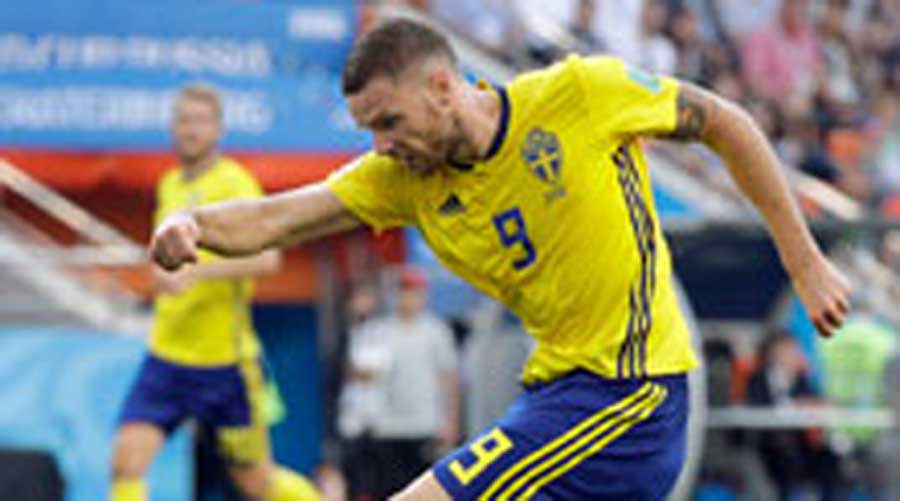 The chances came and went but neither Spain nor Sweden managed to put any of them in the net.

Spain dominated possession and kept the pressure on the opposing area for most of the match but the Swedes held on for a 0-0 draw Monday at the European Championship.

Sweden managed only a few chances at La Cartuja Stadium, but they were some of the most dangerous ones.

Alexander Isak, who plays for Spanish club Real Sociedad, had a shot from inside the area hit the post after deflecting off Spain defender Marcos Llorente in front of the goal line.

Early in the second half, Marcus Berg was inside the area with the ball coming his way, but he mishit his shot.

lvaro Morata had Spain's best chance just a few minutes before Isak but his shot missed wide with goalkeeper Robin Olsen the only opponent to beat.

Everyone can make mistakes, we all make them, Spain midfielder Pedri Gonz lez said about Morata, who was booed by part of the Spanish fans. He works hard for the team and that always shows on the field.

Morata had already missed some chances and been jeered in Spain's final warm-up match against Portugal, also a 0-0 draw.

Spain pressed until the end on Monday but kept misfiring. Olsen made a 90th-minute save off a header by substitute Gerard Moreno, and he had already stopped another close-range header by Dani Olmo in the first half.

The way we earned that point today, the entire team, the way the guys ran in the heat, it wasn't just me who earned this point, Olsen said.

"It was an incredible team effort. We didn't play our best game. It's not the most well-deserved point we've ever taken. But we battled. We showed that we wanted it.

Spain ended with 75% of possession and had 17 total attempts, with five on target. Sweden missed the target on its four attempts.

We played against a rival that decided to defend and tried to create some danger with long balls, and it actually had the chance the win the match, Spain coach Luis Enrique said.

It's a disappointing draw for us.

Spain had failed to score in only one of its last 14 group matches at European Championships.

Sweden hadn't drawn any of its last 17 international matches, since a tie against Spain in qualifying for Euro 2020.

If you come here and play Spain in 32 degree heat (90 degree F) and think you're going to outplay them, you're totally naive, Sweden coach Janne Andersson said. I'm not at all ashamed of this point. If we want to take points from these types of teams, we have to play this way.

In the other group match, Slovakia defeated Poland 2-1 in St. Petersburg.

Spain's matches at Euro 2020 are being played in Seville instead of Bilbao the original host city for the continent-wide tournament because the high contagion rate of the virus in the northern city wouldn't allow for many fans to attend games.
A limited crowd of 12,517 attended the match at La Cartuja, where Spain will also play Poland on Saturday and Slovakia on June 23. A quarterfinal match will also be played at the stadium.

Sweden, which hasn't advanced past the group stage at the European Championship since 2004, next faces Slovakia on Friday in St. Petersburg. The Swedes will also play in Russia against Poland.

Both teams were without players because of the coronavirus. Spain lost captain Sergio Busquets and Sweden was without Mattias Svanberg and Dejan Kulusevski. They were all still in isolation after testing positive for COVID-19 last week.

The entire Spanish team was vaccinated just days before its opening match.

Luis Enrique started with Rodri Hern ndez in Busquets' position, with youngster Pedri and Koke Resurrecci n alongside him in the midfield. The 18-year-old Pedri became Spain's youngest ever player at the tournament.

Both sides are also without their veteran stars at Euro 2020. Sergio Ramos was left off the Spain squad after playing sparingly for Real Madrid this season because of injuries, while Zlatan Ibrahimovic who ended his retirement from Sweden's international team in March couldn't make it to the tournament because of a knee problem.