Italy drew 1-1 with Spain but were dominated in terms of possession, having just 35 per cent of the ball, and shots, with seven to the their opponents’ 16, before triumphing 4-2 on penalties 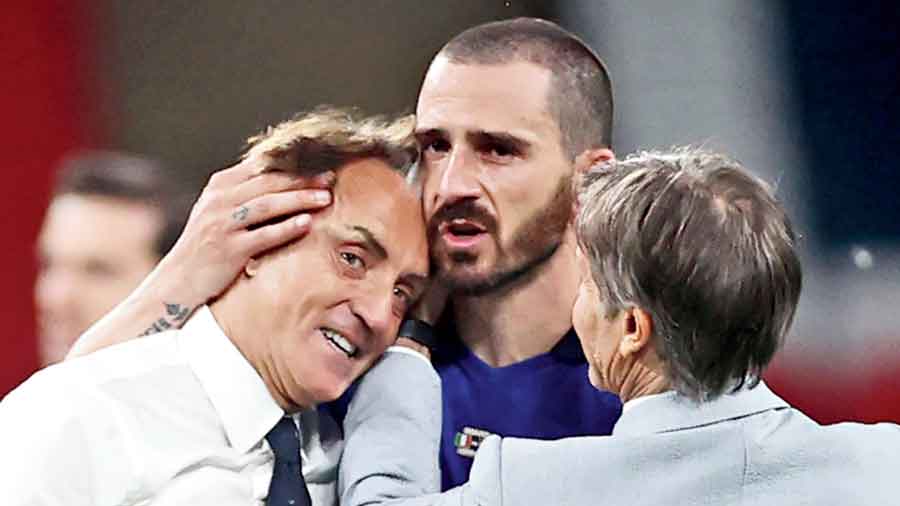 Roberto Mancini believes that Italy proved their doubters wrong by reaching the final of Euro 2020, but admitted that they had to suffer to reach their first major tournament final in nine years.

The Azzurri drew 1-1 with Spain at Wembley but were dominated in terms of possession, having just 35 per cent of the ball, and shots, with seven to the their opponents’ 16, before triumphing 4-2 on penalties.

“There are games where you have to suffer. They can’t all be as smooth as our progress so far. We knew it would be a tough game,” Mancini told a news conference.

“That is why the players and everyone who worked with us over last three years deserve great credit, because it wasn’t easy.

“Almost no one believed we could do it, and yet we are into the final. We are pleased for Italians everywhere.”

Defender Leonardo Bonucci said Spain gave him the hardest challenge of his career. “It was the toughest game I have ever played. I congratulate Spain for what they showed, but once again this Italy showed heart, determination and the ability to push through difficult moments,” Bonucci said.

“Now there is one more centimetre to go. It is incredible what we are doing. We will be back here in five days and we must have the same attitude to bring home this trophy that we have lacked for 50 years.”

The Azzurri were often on the back foot against a talented young Spanish team that starved them of the ball, and Mancini was eager to underline the scale of his side’s achievement.

“We knew it was going to be a very tough match, because in terms of ball possession Spain are the best around.

“There were some issues because we did not have much possession. But we wanted to reach the final and kept trying until the end. Penalties are a lottery, but I want to take my hat off to Spain, they are a wonderful team,” Mancini said.

Winger Federico Chiesa was awarded the Uefa Star of the Match award after scoring a superb curling opener, and the 23-year-old was asked if it was the highlight of his career.

“Without a doubt,”he said. “Playing for my country in matches like these, representing 60 million Italians, was an unbelievable dream that I never imagined.”