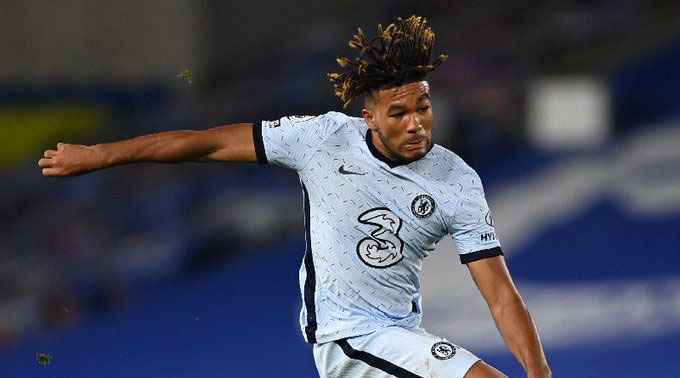 Chelsea manager Frank Lampard heaped praise on defender Reece James and said he was happy with the debuts of Germany forwards Timo Werner and Kai Havertz after a 3-1 win at Brighton & Hove Albion on Monday.

Chelsea looked shaky at times in their opening Premier League match of the season but a superb goal by 20-year old James to make the score 2-1 soon after the break swung the contest and had Lampard purring with delight.

“It had me off my seat and we needed it, we weren’t at our best in that period,” Lampard told Sky Sports. “Reece has got that in him, he is a player of such quality. You try and get him in areas where he can be a threat.

“If you analyse the fact that we’ve been together as a team for four days, to expect everything to click on Day One is difficult. We showed determination and that is a game we might have dropped points in last year.”

Chelsea were on the backfoot for much of the first half but took the lead against the run of play after Werner showed a glimpse of his talent, racing past Mat Ryan to win a penalty as the Brighton keeper fouled him.

Jorginho converted the spot kick, and after Leandro Trossard equalised, Chelsea enjoyed a moment of magic from under-21 international James to restore their lead before Kurt Zouma’s deflected shot sealed the contest.

Havertz, who worked hard in a three-pronged line behind Werner which included Ruben Loftus-Cheek and Mason Mount, was substituted in the 80th minute but Lampard was happy with the former Bayer Leverkusen forward.

“I liked Kai Havertz,” said Lampard. “It’s not a game where you come away with some vintage moments and there’s a lot on his shoulders but you saw glimpses of what he can do.

“Everything I have seen from him is spot on and his quality will come through. He’s hugely talented.”

Lampard pointed out that despite the wealth of their attacking talent, Chelsea were still a work in progress and unlikely to challenge champions Liverpool for the title.