Football centre at aid of underprivileged 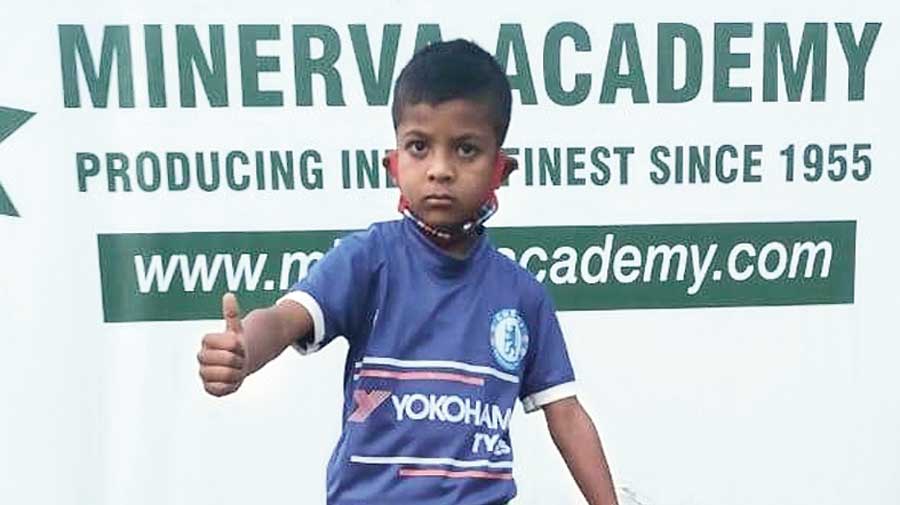 Arya Kumir is just seven and he eats, sleeps and breathes football. But his father doesn’t even have the money to buy him boots and jerseys. However, that couldn’t prevent the little striker from being chosen by Minerva Academy officials.

Arijit Mondal is 13 and football is his first love. His father works in a roadside food stall and finds it hard to run the family, let alone spending money for Arijit’s training. But the Class IX student of Santoshpur Sikshayatan has already taken the first step towards achieving his dream of donning the SC East Bengal jersey in ISL by making it to the under-13 East Bengal squad.

The financial crisis couldn’t be a barrier for Arya and Arijit, thanks to the free football coaching centre run by Anandapur Swami Vivekananda Seba Samiti, a social welfare organisation. Despite not having their own ground, gym and other modern training facilities, the organisation has been trying hard to train young talents, who mostly come from underprivileged backgrounds, and help them realise their dreams.

“We started our journey with around 15 kids in 2006. Our objective was to nurture little talents from the Khalpar slum adjacent to EM Bypass near Ruby Hospital and No. 3 Kalikapur slum and bring them into the mainstream through football. We hold the training at a KMDA ground near Ruby Hospital and right now around 40 boys aged between six and 21 years train regularly under coach Chinmoy Sarkar. We are not an NGO. We somehow manage to run our projects with donations from our members, their friends and relatives,” said founder-member Asim Majumdar.

Arya was adjudged the best player with a goal and three assists in an age-group tournament held at Sanghasree Club, Garia, from where Minerva Academy officials picked him up. “Quality coaching is the secret behind the success of the boys here. I believe Arya wouldn’t have boarded the train to Chandigarh if I didn’t come to know about this organisation a couple of years back. From giving Arya jerseys and boots to taking him for trials, they did everything. I didn’t even have the money to buy train tickets to Chandigarh,” said Biplab Kumir, father of the Class I student of Jadavpur Vidyapith. Biplab used to run a chicken shop but the lockdown and illness forced him to down its shutters.

Arijit, who lives in a one-room tiled house in Mukundapur, is also thankful to the coaching centre for making him believe that his favourite game can put an end to his family woes. “Whatever I have learnt till now is because of this coaching centre. Though I have been training with the East Bengal under-13 squad since last year, I never miss a practice session here. It’s like my home,” said the right winger who is set to play junior I-League this year.

Ritwik Das, the 24-year-old midfielder who has made his ISL debut this year for Kerala Blasters, is also a product of this coaching centre.

“I had joined the coaching camp at the age of 15 mainly because of Chinmoyda. I have never seen any coach putting in so much effort for his boys. He instils the belief into his boys that if you have the potential and if you work hard, nobody can stop you from reaching your goals,” said Ritwik, who still trains under Sarkar during the off season. Ritwik played two seasons each for Customs and Kalighat MS and then three seasons for Real Kashmir before joining Kerala Blasters this season.

However, Sarkar feels his boys need a proper ground and, more importantly, a healthy diet if they have to compete with players from professional football academies.

“All the boys here have a never-say-die attitude and they work very hard. But we are not being able to provide them with a good diet and as a result they are lacking in physical strength. We don’t even know how long we can use the KMDA ground. We desperately need a ground of our own,” said the coach.