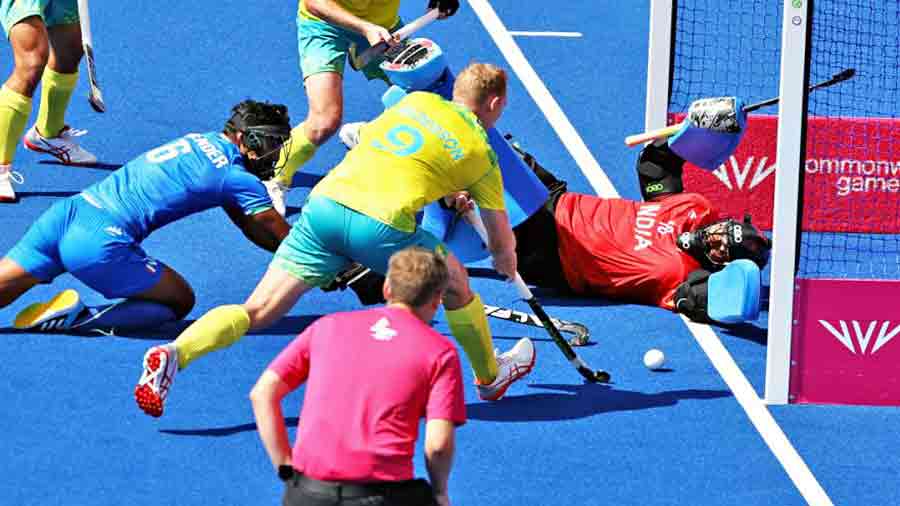 The India men’s hockey team suffered an embarrassing 0-7 drubbing at the hands of defending champions Australia to settle for a silver medal at the Commonwealth Games here on Monday. Australia blew away India with their whirlwind speed extending their dominance on the CWG stage. Since hockey’s introduction at the Games in 1998, Australia have always stood on top of the podium.

This is India’s third defeat to Australia in a CWG final, having lost to them in tyhe 2010 (8-0) and the 2014 (4-0) editions of the Games. At one point it looked Australia would better the 2010 CWG record.    Nathan Ephraums and Tom Wickham scored a brace each while Blake Govers, Jacob Anderson, and Flynn Ogilvie also found the net in the lop-sided contest. It was a far cry from what was expected in a gold medal clash as a dominant Australia pumped in five goals in the first half to take the game away from India. The Indians looked rusty and clueless as they conceded too much space to the Australians in the midfield, which allowed the Kookaburras to make inroads.

Coach unhappy “There is a thing called energy and I don’t think we had that today (Monday),” head coach Graham Reid said. “I’m disappointed we didn’t play well at all. We let ourselves down and all the things we talked about we didn’t do. It’s disappointing.” The structure which the Indians are known for was nowhere to be seen. The defence looked shaky, while there was no co-ordination between the midfield and forwardline. The past problem of miss-passing and trapping returned to haunt the Indians. It allowed Australia to play free-flowing hockey.

The Indians made very few circle penetrations and whenever they did, they lacked the final pass or looked out of sorts. Such was India’s struggle that the team could not secure a single penalty corner. Australia secured their three penalty corners inside the first 10 minutes and broke the deadlock from the third through Govers , whose flick went in between India custodian PR Sreejesh’s legs. A minute before the first quarter, Ephraums scored from a counter-attack from the right flank.

It was raining goals for Australia with Anderson making it 3-0 in the 22nd minute, scoring off a rebound, tapping in from close range after Sreejesh made the initial save. India’s only shot at the goal came in the 24th minute but Akashdeep Singh’s reverse hit was saved by Australian goalie Andrew Charter.