Advertisement
Home / Sports / Cricket / We will keep playing this brand of cricket: Jonny

We will keep playing this brand of cricket: Jonny 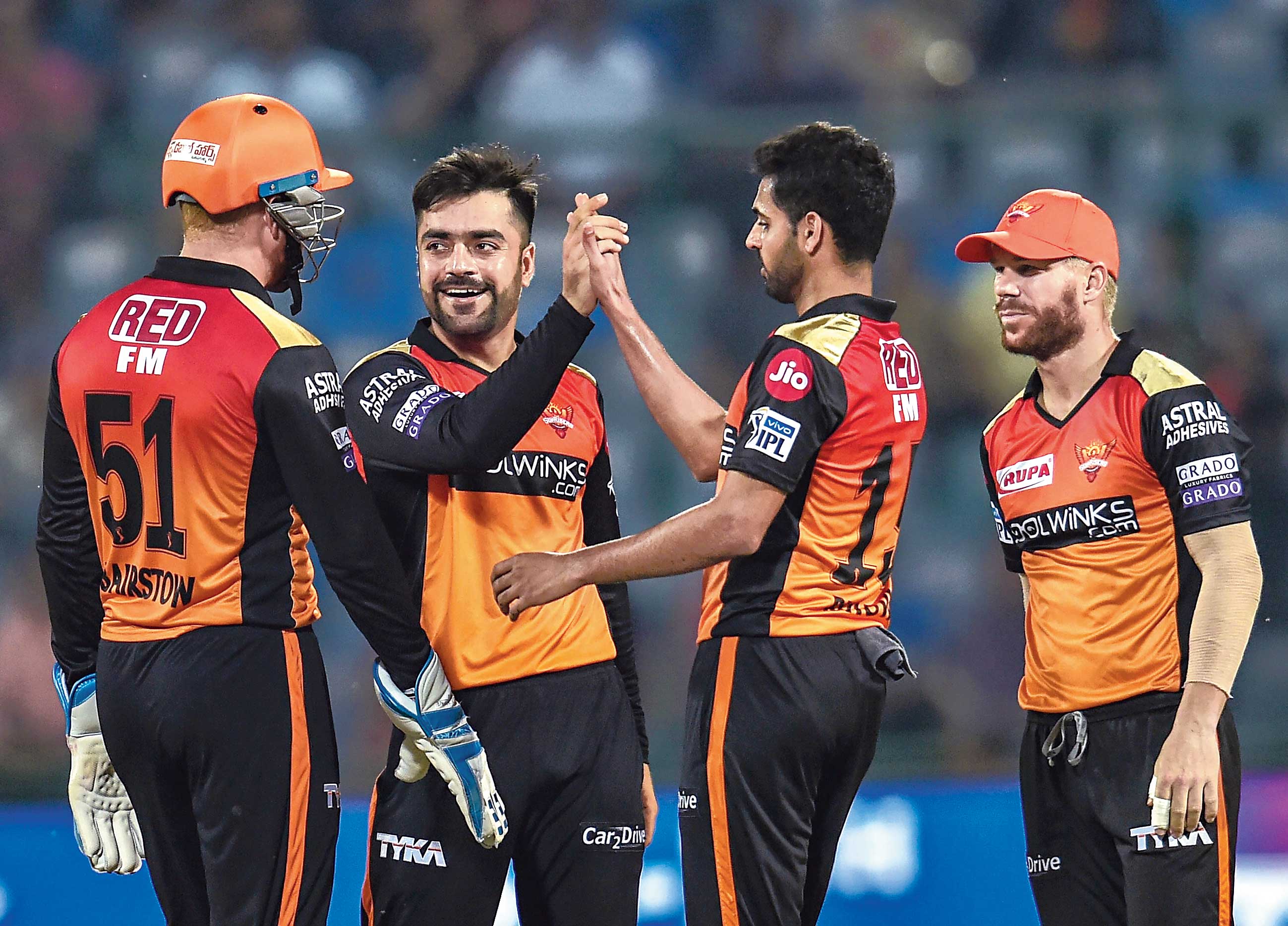 Bhuvneshwar Kumar of Sunrisers Hyderabad celebrates with Rashid Khan, Johnny Bairstow and David Warner the fall of a Delhi Capitals wicket at the Kotla on Thursday.
(PTI)
Our Bureau And Agencies   |   Calcutta/New Delhi   |   Published 04.04.19, 08:46 PM

Afghanistan’s Mohammed Nabi played a pivotal role and so did Jonny Bairstow as Sunrisers Hyderabad dished registered their third straight victory in IPL XII with a five-wicket win over Delhi Capitals at the Kotla on Thursday.

Nabi (two for 21) took a couple of wickets with the ball and also played a crucial nine-ball 17-run unbeaten knock towards the end, while opener Bairstow smashed a 28-ball 48 to help the Sunrisers keep their winning run intact.

By virtue of this win, the Sunrisers have moved to the top of the standings with six points from four games.

Chasing a modest 130, Bairstow laid the foundation with his brisk knock before the Sunrisers lost five wickets for 48 runs to slip to 111 for five by the end of the 16th over. However, Nabi and Yusuf Pathan (nine not out) then held their nerves to take the Sunrisers home with nine balls to spare.

“We are really pleased with the start we have got. We have three games in quick succession and hopefully, we’ll keep playing this brand of cricket that we’ve been playing.

“We have a great group of guys in the side and we all play in the same fashion,” Man of the Match Bairstow said during the post-match presentation.

On a pitch where stroke-making wasn’t easy, Bairstow felt it was easier batting second while reacting to the situation was equally important. “There was a little less bounce here than what we had in Hyderabad and you could see that with the wear and tear of the pitch.

“It was a good toss to win because you could see it was good to bat second as we could see what we needed to do. When the bowlers are bowling, they tell you that this boundary is shorter and it’s turning from which part.

“But at the same time, the bowlers are different on both sides. Our guys are shorter and they have taller guys, so you can only react to the situation,” Bairstow explained.

Earlier, electing to bowl first, the Sunrisers dished out a superb bowling effort on the slow and dry wicket to restrict Delhi Capitals to a lowly 129 for eight. It was skipper Shreyas Iyer, who emerged as the highest scorer for Delhi Capitals with a steady 41-ball 43.

Chasing a low target, Bairstow got a reprieve early on when Akshar Patel dropped a caught-and-bowled chance in the second over.