Registers dream bowling figures, which were crucial given Siraj’s inability to bowl at full steam 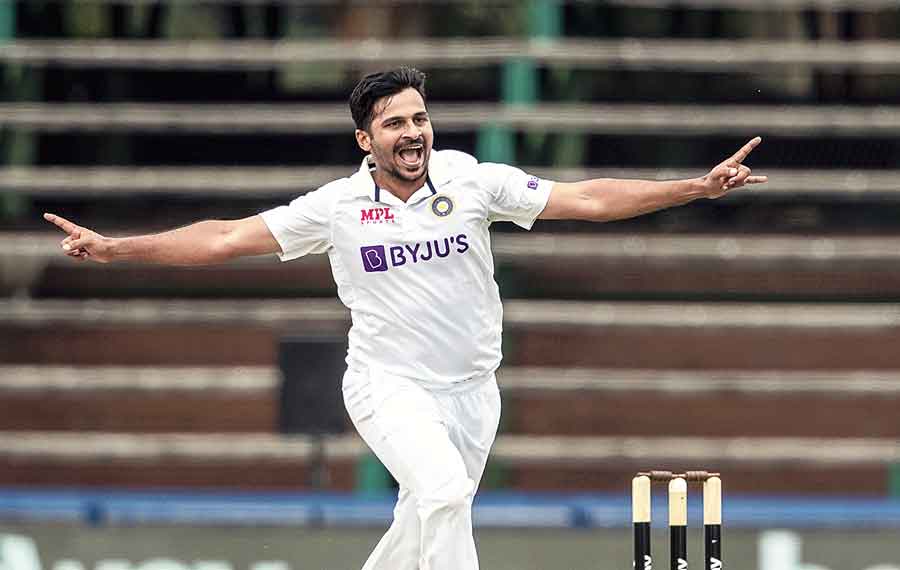 Thakur after dismissing Temba Bavuma — one of his seven wickets — on Day II at the Wanderers in Johannesburg on Tuesday.
AP/PTI
Sayak Banerjee   |   Published 05.01.22, 02:41 AM

As has been the trend since the home series versus England early last year, the Indian bowlers once again compensated for the batsmen’s poor showing. This time around, it was Shardul Thakur, who not just gave the breakthroughs, which seem to be his forte, but also picked up as many as seven wickets to help India bounce back in this second Test at the Wanderers in Johannesburg.

Thanks to ‘Lord’ Shardul’s dream bowling figures (7/61), which were crucial in the circumstances, given Mohammed Siraj’s inability to bowl at full steam owing to his right hamstring issue, India could limit South Africa’s lead to 27.

At stumps on Day II, India were 85/2 in their second innings, having erased the deficit and extended their overall lead to 58. With stand-in skipper KL Rahul and Mayank Agarwal back in the pavilion, the onus is on senior pros Cheteshwar Pujara (35 batting) and Ajinkya Rahane (batting on 11). Individually too, the two would like to make meaningful contributions to save their respective berths in the XI.

Together, Pujara and Rahane have bailed India out in the past, with their partnership for the fourth wicket laying the foundation for the victory over England at Lord’s last August being their last rescue act together. Pujara, who has been under greater pressure, has looked pretty decent so far and has tried to be aggressive with his current strike rate being in excess of 80, which rarely happens.

The approach has worked well so far, and could be the right way to go given the unpredictable nature of the Wanderers wicket.

The man who effected the actual turnaround for India was none other than Shardul. He may not be having that express pace like Jasprit Bumrah and Mohammed Shami, but his ability to move the ball in helpful conditions and accuracy can be equally effective.

Having negotiated both Bumrah and Shami well in the morning session, overnight batsmen Dean Elgar and Keegan Petersen were looking towards taking South Africa close to India’s first-innings total of 202. But just when India required a wicket, Shardul stood up, got the ball to move a bit and found the edge of Elgar’s bat.

Soon after, he picked up Petersen, who unnecessarily poked outside off-stump despite looking steady. In the last over before lunch, Shardul was a tad fortunate to take his third wicket in the form of Rassie van der Dussen, who surprisingly didn’t raise any doubt and walked off even after the ball had hit the ground before landing into Rishabh Pant’s gloves, as television replays showed.

Shardul again brought the ball a shade in to break an enterprising fifth-wicket stand between Temba Bavuma (51) and Kyle Verreynne (21), trapping the South Africa wicketkeeper-batsman plumb lbw. But Bavuma, who till then had done a very impressive job, threw his wicket away by advancing down the track against Thakur and edging down the leg side. Shardul then had his maiden fifer in Tests.

With Marco Jansen and Keshav Maharaj throwing their bats, South Africa somehow stretched their total to 229. But in spite of dismissing the India openers early, the South African bowlers dished out too many boundary balls, allowing Pujara some easy runs.