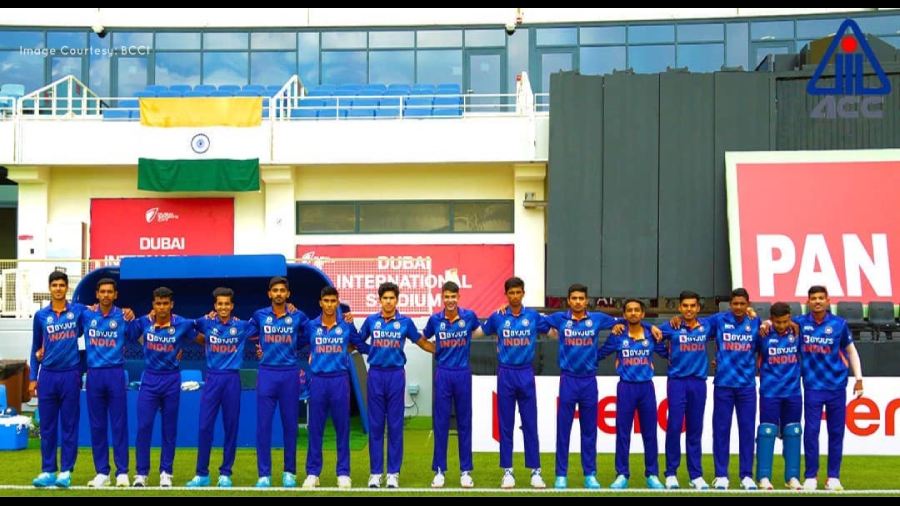 Four-time champions India dished out a clinical show to start their U-19 World Cup campaign on a winning note, thrashing South Africa by 45 runs here.

Put in to bat at the Providence stadium on Saturday, India rode on skipper Yash Dhull's responsible 82 to post a fighting 232 allout and then bundled out the opposition for 187, with left-arm spinner Vicky Ostwal (5/28) and pacer Raj Bawa (4/47) doing bulk of the damage.

Chasing 233, South Africa colts lost opener Ethan John Cunningham (0) in the first over as he was trapped in front by pacer Rajvardhan Hangargekar (1/38).

But Valintine Kitime (25) and Dewald Brevis (65), who idolizes AB de Villiers, then rallied the innings with a 58-run stand.

The duo played patiently and hit the loose balls away as South Africa cantered to 38 for 1 after 10 overs.

Kitime then took on left-arm medium pacer Ravi Kumar (0/30) in the 10th over, hitting him for a boundary and a six as South Africa amassed 10 runs off it.

Brevis and Kitime then hammered Bawa, amassing 17 runs of the 11th over. But Ostwal broke the stand after removing Kitime, who edged to stumper Dinesh Bana in the 12th over.

It soon became 83 for 3 as Ostwal struck again, this time dismissing GJ Maree (8), who was caught by Bana in the 21st over.

Thereafter, India did not allow any other South African batter to settle down. Bawa sent back a well-set Brevis, who was caught by rival skipper Dhull in the 36th over and that triggered a collapse for the rainbow nation.

Skipper George Van Heerden (36) tried to take the game deep but he was devoid of partners as Bawa and Ostwal wrecked havoc on the middle and lower order.

Earlier, Dhull helped India recover from a poor start and his knock laid the cornerstone of India's fighting total.

The start of play was delayed by around 40 minutes due to rain and amid the prevailing conditions, South Africa decided to put India in to bat.

Left-handed Harnoor, who was India's leading run getter in the Asia Cup and scored a century in the warm-up game against Australia here, fell to a ball that nipped back in. Raghuvanshi played around Mnyanda's inswinger and was plumb in front, leaving India for 11 for two.

With India in trouble, skipper Dhull and Shaik Rasheed (31) got together to resurrect the innings. They shared a 71-run stand before Rasheed missed a sweep shot off left-arm spinner Liam Alder to be adjudged LBW.

Rasheed, who was dropped on 17 at second slip off Andile Simelane, played some impressive strokes in his 54-ball knock, including an aerial pull and an on drive off pacer Matthew Boast to break the shackles.

Delhi batter Dhull then shared a 44-run stand with Nishant Sindhu (25) to take the innings forward. The skipper ended up with 11 fours and it took a brilliant direct hit from Simelane to dismiss him.

Kaushal Tamble added 35 valuable runs towards the end of the innings to take the team past 200.

Boast was quick to clean up the lower-order, removing Tambe and Rajvardhan Hangargekar in successive deliveries as India were all out in 46.5 overs.

The Dhull-led side, who have also won the Asia Cup, will now take on Ireland on Wednesday.

Ravi Kumar not out 0

Liam Alder not out 17