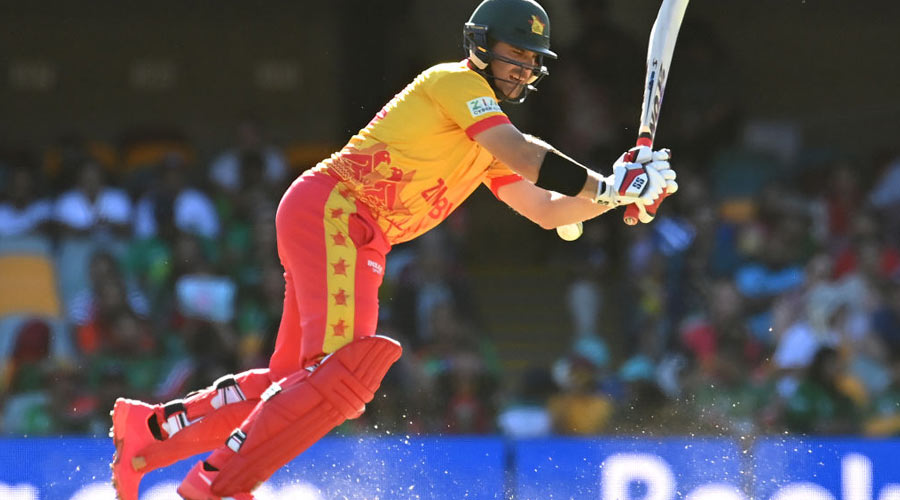 Sikandar Raza was the only bright spot for Zimbabwe in an otherwise sloppy batting display as the Netherlands bowl them out for 117 in their T20 World Cup here on Wednesday.

The star Zimbabwe all-rounder slammed a 24-ball 40 and looked like batting for a different team as wickets kept falling around him. He batted with supreme confidence and control en route to a 24-ball 40 (3x4, 3x6).

Pacer Brandon Glover (4-1-29-2) troubled the Zimbabwe batters early on, extracting swing from the Adelaide Oval as he gave a twin blow inside the Powerplay by dismissing skipper Craig Ervine (3) and Regis Chakbva (5) in successive overs.

That only two batters reached double-digit figures and they consumed 66 dot balls summed up Zimbabwe's plight in their must-win match.

De Leede took the prized-scalp of Raza who looked to tear the Dutch attack apart as the batter mis-timed a good length ball.

Fred Klaassen, who returned with 1/17, took a well-judged running catch at the boundary to end Raza's entertainment.

Electing to bat, the top-three Wessly Madhevere (1), skipper Craig Ervine (3) and Regis Chakabva (5) failed to get going and managed 20 runs in Powerplay.

Reeling at 20/3, Raza straightaway got going with his swivel shots to counter-attack the Dutch bowlers.

He bisected the field at ease with his elegant drives and looked in total control in a fine 48-run partnership off 35 balls with Sean Williams.

Just when Zimbabwe were trying to build a partnership and get back some momentum, Van Meekeren triggered yet another collapse by dismissing Williams (28 of 23 balls).

Zimbabwe captain Craig Ervine won the toss and opted to bat in their T20 World Cup match against the Netherlands here on Wednesday.