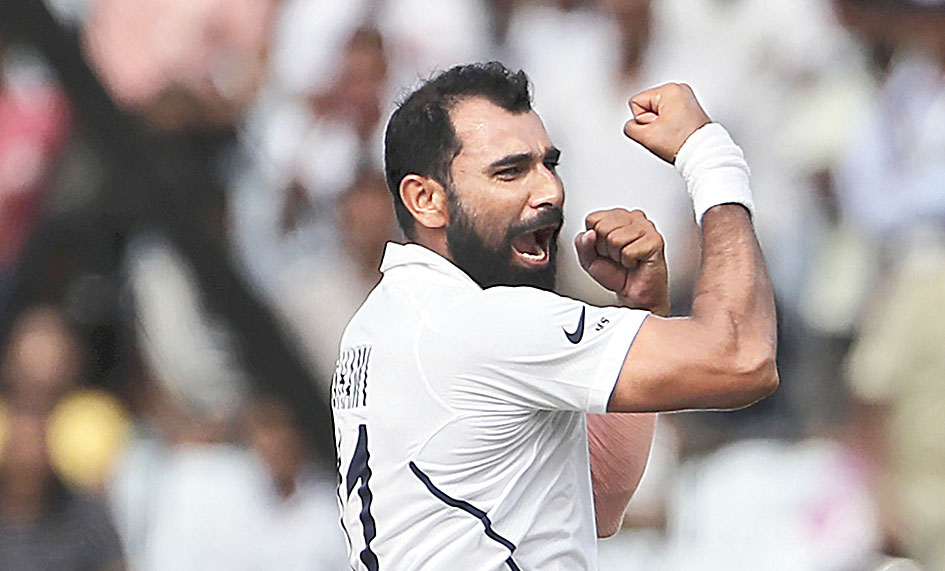 Teams visiting India are generally worried about spinners and spin-friendly conditions. But now they need to deal with the pacers first — that is the message India’s quicks put across successfully again at the JSCA International Stadium here on Monday.

Of the South African wickets that fell on Day III, across both their innings, a good majority fell to a fiery Mohammed Shami and Umesh Yadav. The duo wreaked havoc, and South Africa bled.

Going from bad to worse in this third and final Test, South Africa were reeling at 132/8 at close of play after an extended session. They are still 203 runs behind, following on after having been bundled out for 162 in their first essay.

The skies got clearer and brighter as the day progressed, and thanks to the pacers polishing off South Africa’s top and middle order in their second innings, India are left with little to do to seal the game and register a sweep.

The visitors hardly put up any resistance. The approach of some of their players seemed to suggest that mentally they had given up.

The only worry for India is the injury picked up by wicketkeeper Wriddhiman Saha who hurt his right ring finger and had to leave the field.

Shami and Umesh not just made inroads, they forced South Africa to take a concussion substitute. A brute of a bouncer from Umesh hit Dean Elgar on the side of his helmet and the left-hander fell to the ground. He eventually retired hurt.

Theunis de Bruyn, the third concussion substitute after Marnus Labuschagne (for Steve Smith) and Jermaine Blackwood (for Darren Bravo), came in for Elgar.

It remains to be seen if De Bruyne can do a Labuschagne, but so he has at least ensured the game didn’t get over in three days.

The quicks dominated right through the day, bringing back those forgettable moments when Indian teams of the past were often terrorised and tormented by the likes of Allan Donald, Shaun Pollock and other South African pacers.

The very first over of the day from Umesh offered a hint of what was in store for the Proteas. Bowling two poor deliveries at the start, he all of a sudden came up with a peach to which South Africa captain Faf du Plessis had no answer. The ball landed on the seam and straightened to knock over the bails.

Zubayr Hamza, playing just his second Test, and Temba Bavuma tried to fight back. But on a pitch where the ball has kept low from the outset, Hamza tried to cut an arm ball from Ravindra Jadeja which brought about his downfall.

Soon after, debutant Shahbaz Nadeem struck, foxing Bavuma with his turn and having him stumped. Nadeem had a pretty decent debut, finishing with two wickets in the first innings for only 22 runs and then effecting a run out off a direct hit later in the final session to send back the impressive George Linde.

After India enforced the follow-on, Umesh tried the occasional short stuff, while Shami was dead accurate with his sharp cutters aided by excellent use of the seam. He got one to straighten a bit to clean up Hamza.

A little later, he brought one back in to Du Plessis who was caught plumb in front. And then Shami pitched one on the corridor of uncertainty that sent back Bavuma.