For CSK, even their well-set batsmen were unable to last till the end, as RCB limited them to 160 for 8 and register a crucial 13-run win 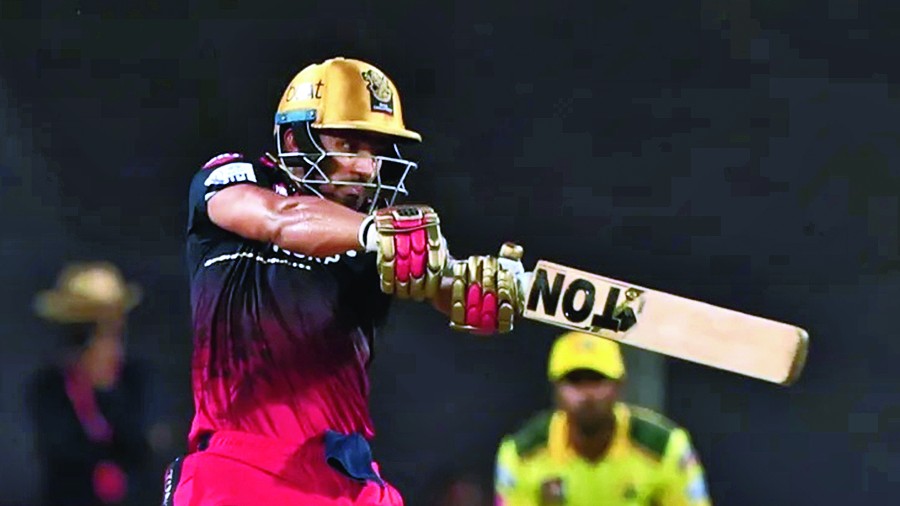 Royal Challengers Bangalore’s Mahipal Lomror during his 27-ball 42 against Chennai Super Kings at the MCA Stadium in Pune on Wednesday.
PTI
Sayak Banerjee   |   Published 05.05.22, 02:04 AM

Royal Challengers Bangalore (RCB) and Chennai Super Kings had a striking similarity to their innings at the MCA Stadium in Pune on Wednesday. Both teams began solidly, only to lose three wickets andsomewhat fall off the track in the middle overs.

But RCB were helped by a spirited fightback by Mahipal Lomror (42), who played just his second game this season, and finisher Dinesh Karthik (26 not out)’s late effort that propelled them to 173 for 8 after being put in to bat on a slower wicket. For Chennai, even their well-set batsmen were unable to last till the end, as RCB limited them to 160 for 8 and register a crucial 13-run win.

Getting back to winning ways after three losses on the trot, RCB have now moved up to fourth in the standings with 12 points. The playoff chances for Chennai, following their seventh defeat in 10 matches, are also very slim.

Openers Ruturaj Gaikwad (28) and Devon Conway (56) again took Chennai off to a flying start. A mis-timed stroke from Gaikwad cost him his wicket off Shahbaz Ahmed, but Glenn Maxwell (2/22) hurt Chennai more.

Captain Faf du Plessis did fairly well in terms of his field-placings, and that was reflected when he had positioned a man at deep square-leg to effect the excellent-looking Conway’s dismissal off Wanindu Hasaranga.

However, Harshal Patel (3/35) turned the game for RCB. The pacer varied his pace brilliantly to account for Ravindra Jadeja and Moeen Ali (34) at a critical juncture.

Soon after, the disciplined Josh Hazlewood (1/19) picked up Dhoni to virtually seal the game for RCB.

From 62 without loss in the eighth over, Moeen’s clever bowling resulted in the quick dismissals of both Du Plessis (38) and Virat Kohli (30) reduced RCB to 79 for 3 in the 10th over. Later, Maheesh Theekshana’s three wickets in the penultimate over of RCB’s innings also dented their progress.

But in between, the temperament shown by Lomror to compile such a knock at a difficult phase turned out to be priceless for RCB.