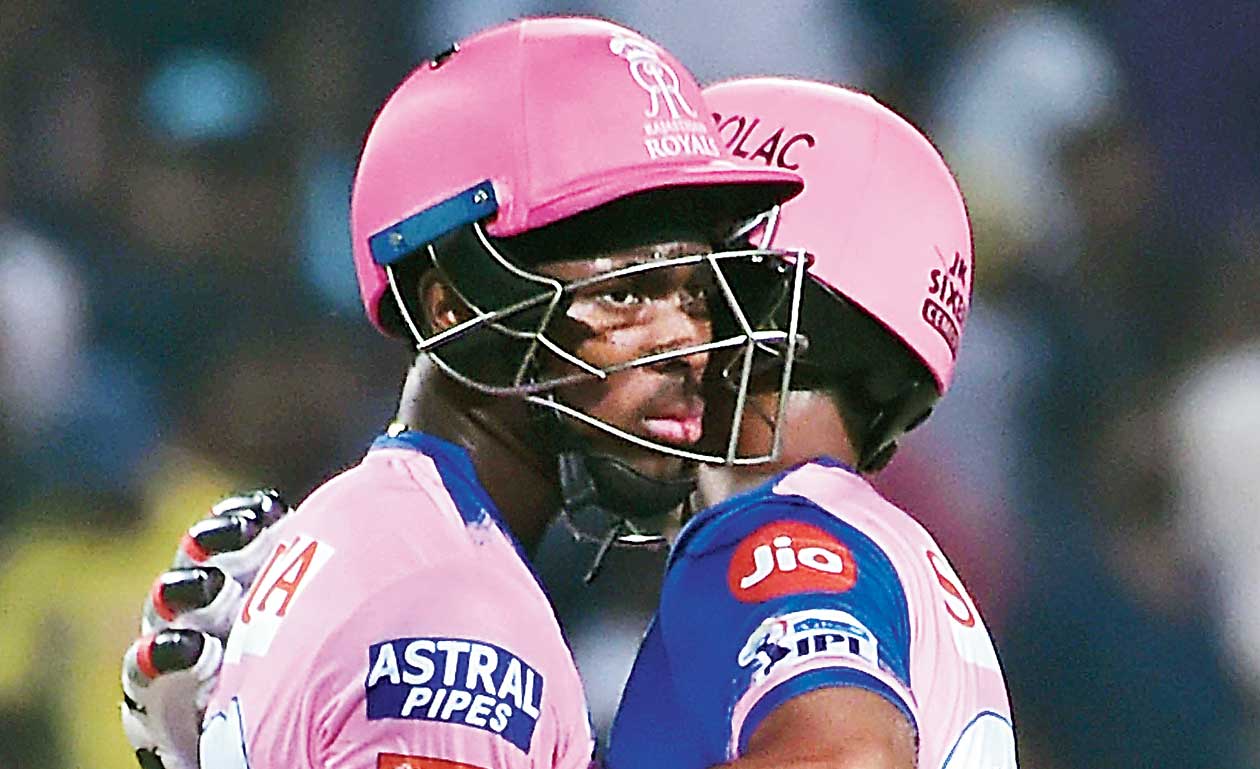 The Indian Premier League has an uncanny habit of discovering new talent. Seventeen-year-old Riyan Parag probably took some infant steps to glory at the Eden on Thursday.

While the Rajasthan Royals survived to fight another day, the Kolkata Knight Riders’ chances of making it to the play-offs seem to be almost over.

Jofra Archer sealed the Royals’ three-wicket victory with a six off Prasidh Krishna but it was Parag who had scripted the turnaround from an almost lost position.

The Royals were 122 for five after 15 overs and it had seemed impossible until Parag and Archer (27 not out off 12 balls) changed the script.

The Guwahati-based Parag showed guts and promise during his 47 off 31 balls. He carried on despite being hit on the helmet by an Andre Russell delivery. There were two sixes, one each off Prasidh Krishna and Russell, that kept the Royals in the chase.

Parag, who survived a caught and bowled chance off Sunil Narine for nought, was unlucky to be hit wicket when going for an over-ambitious stroke. But more importantly, he stitched together 44 off 21 balls for the seventh wicket with Archer.

He had scored 43 in the Royals’ successful chase against Mumbai Indians but Steve Smith had played a stellar role in that match.

In vain: Dinesh Karthik on way to his unbeaten 97, his highest IPL score.
(PTI)

The Royals began their chase of 176 with a flourish, the openers racing to 53 off 32 balls. But the slide began when Ajinkya Rahane was trapped in front by Narine.

Six balls later, Sanju Samson was bowled through the gate by a Piyush Chawla googly as the batsman attempted a premeditated sweep.

Worse was to follow as Steve Smith was done in by a straight one from Narine. The Royals were struggling at 63 for three. Andre Russell plucked a catch on the boundary ropes after timing his jump to perfection to send back Ben Stokes.

The Knight Riders seemed to be on top but the Royals changed the script in the last five overs.

Earlier, captain Dinesh Karthik showed that Knight Riders is not all about Russell’s batting. Relying more on timing and placement than brute power, he remained unbeaten on 97 off 50 balls with seven boundaries and nine sixes.

Following a sedate start during which he scored three off 10 balls, Karthik accelerated making 94 off the next 40. The Knight Riders captain launched into an overdrive in the 11th over punishing Shreyas Gopal for three boundaries and a six.

With Sunil Narine also joining the party with a six, the over produced 25 runs and signalled the Knight Riders’ positive intentions.

That opened the floodgates as Knight Riders never lost the momentum thereafter. Karthik hardly received any support at the other end but that didn’t matter.

Even the ever-dependable Russell wasn’t in his elements. Bothered by his recurring shoulder injury, he often grimaced in pain on way to his run-a-ball 14 before being caught in the deep.

The credit should go to the Royals’ bowlers in the first half of the Knight Riders’ innings. Oshane Thomas must have been reminded of his spell at Eden Gardens five months ago.

Making his T20I debut for the West Indies, he sent shivers down India’s top order with a lethal combination of pace and bounce. On Thursday, he showed that he hadn’t lost much of his sheen. Bowling consistently around 140kmph, Varun Aaron and he made good use of the liveliness on the wicket.

Varun, however, made the most of the circumstances. The Jharkhand pacer dismissed Chris Lynn with the third ball of the match. It cut back off the seam and as Lynn tried to cut, it rolled on to his stumps off the inside edge.

Shubman Gill (14) was his second victim. Varun bowled him through the gate with one that swung in sharply.