LSG have moved up to the second position in the standings with six points, while the Delhi Capitals are at No.7 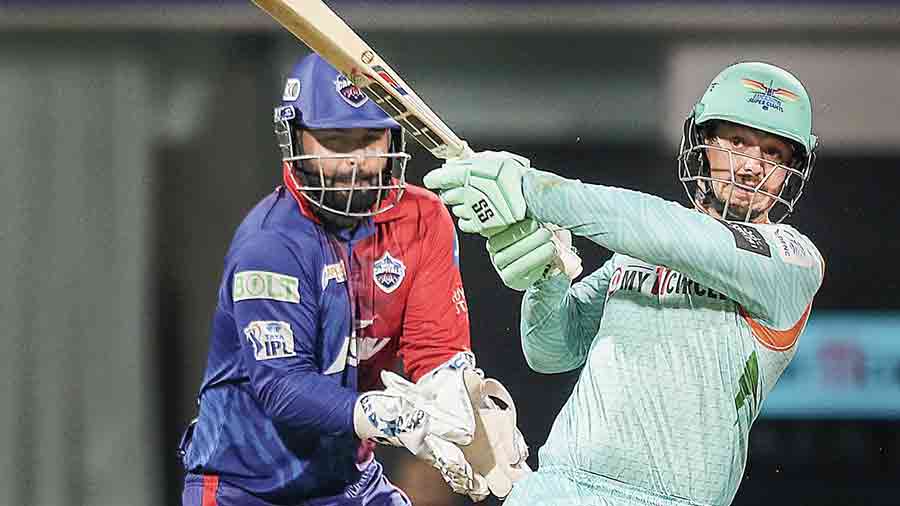 Disciplined bowling can be of great help to a team even if it does not produce wickets. That’s what the Lucknow Super Giants showed as their bowlers did well enough to set the game up for their team.

After restricting Delhi Capitals to a modest total of 149 for 3, Lucknow rode on opener Quinton de Kock’s strokeful 52-ball 80 to romp to a six-wicket win at the DY Patil Stadium in Navi Mumbai on Thursday.

With their third win on the trot, Lucknow have moved up to the second position in the standings with six points, while the Capitals are at No.7.

Courtesy De Kock, Lucknow had got off to a solid start with the equation being favourable right through his stay at the crease. The wicketkeeper-batsman carted compatriot Anrich Nortje, who played his first competitive game since last November, to all parts of the ground.

For Nortje, it was a forgettable game as he had to be taken out of the attack for bowling the beamer twice. The scenario had become a little bit trickier for Lucknow after De Kocks’s late dismissal.

But young Ayush Badoni (10 not out off three balls) showed excellent temperament and composure yet again, hitting Shardul Thakur for a boundary and a maximum off consecutive balls that took Lucknow home with two deliveries remaining.

Not that the pitch had steep bounce or was sluggish. There was a fair bit of dew as well. Delhi captain Rishabh Pant (39 not out off 36 balls) stayed at the crease till the end. Yet, the Capitals were short of 150, and it’s all due to some excellent slog-overs bowling by Jason Holder, who also got support from his pace colleague Avesh Khan.

The variations from Holder (0/30 off four overs), which included the slower bouncer and wide yorker, were key to the Capitals managing just one boundary off the last three overs of their innings.

What also hurt the Capitals to an extent was David Warner, in his first appearance in this IPL, lacking the fluency that he is known for. Agreed, he didn’t get much of the strike early on, but a poor shot brought about his departure off Ravi Bishnoi.

Put in to bat, Prithvi Shaw (61 off 34 balls) had given the Capitals a fine start with cracking shots all around the ground. But before he could inflict further damage, off-spinner Krishnappa Gowtham (1/23 off four overs), coming in place of an injured Manish Pandey, induced an edge off Prithvi’s bat.

Thereafter, leg-spinner Bishnoi’s double strikes reduced the Capitals to 74 for 3 in the 11th over after being 67 without loss at the 7.2-over mark.

After accounting for Warner, Bishnoi (2/22 off four overs) cleaned up Rovman Powell. That certainly was a crucial phase of the game and Lucknow dominated it.