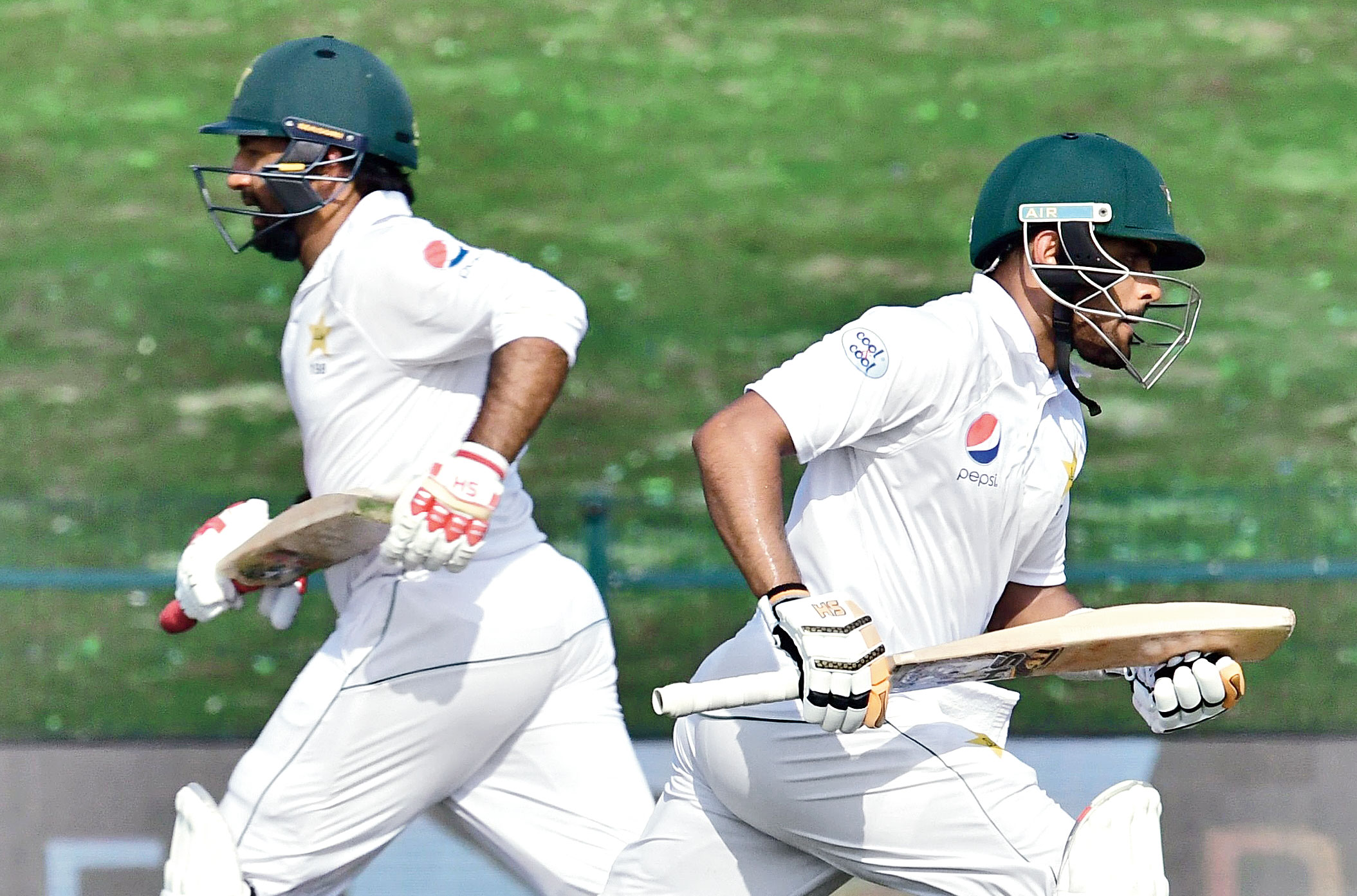 Pakistan grabbed an early wicket after Babar Azam struck a fluent 99 to edge closer to claiming a series victory over Australia in the second Test, in Abu Dhabi on Thursday.

Azam narrowly missed out on a hundred after an aggressive innings, while skipper Sarfraz Ahmed followed up his first-innings 94 with 81 as Pakistan declared their second innings at 400 for nine, setting a daunting 538-run target for the visitors.

By the close on the third day, Pakistan had Shaun Marsh dismissed for four — bowled by left-arm paceman Mir Hamza for his first Test wicket — to boost their chances of victory after Australia clung on for a thrilling draw in the first Test in Dubai last week.

Aaron Finch (24) and Travis Head (17) were at the crease with Australia, who are 47 for one and need another 491 for an unlikely win or to bat out two full days on a weary and spinning Sheikh Zayed Stadium pitch.

No team has ever chased more than 418 for seven to win a Test, made by the West Indies against Australia at Antigua in 2003.

Pakistan piled on the runs with Azam, Sarfraz and Azhar Ali — who was the casualty of a bizarre run out — all making half-centuries to build on the hosts’ 137-run first-innings lead.

But none of them could go on to score a century, with Azam falling agonisingly close to his maiden hundred, trapped leg-before by medium pacer Mitchell Marsh.

After a dull opening period, the embarrassing dismissal of Azhar brought the day to life. The batsman edged a Peter Siddle delivery towards the third-man boundary and, thinking the ball had crossed the rope, halted in the middle of the pitch to talk to fellow batsman Asad Shafiq.

But Mitchell Starc picked up the ball less than a yard from the boundary and threw it back to wicketkeeper Tim Paine, who ran Azhar out, leaving the Pakistani duo — who have combined experience of 130 Tests and over 9,000 runs — stranded and looking bewildered.

Senior batsman Azhar anticipated some teasing from his 10-year-old son after his bizarre run out. “My son is going to speak about it (the run out) for a long time and in a funny way,” said Azhar of his 10-year-old son Ibtisam, who luckily for him arrived at the ground after his father's dismissal. “Whenever I will say something about cricket he will surely come back to this incident.”

Azhar fell for a well-made 64.

The teams will play three Twenty20 Internationals after the Tests, with the first in Abu Dhabi on Wednesday.

Starc is battling a hamstring strain and may not be in the Australia squad for the upcoming T20I series.

Australia will be keen to preserve their main strike weapon for the Test series against India at home and may not risk him for the three Twenty20 matches against Pakistan starting next week.